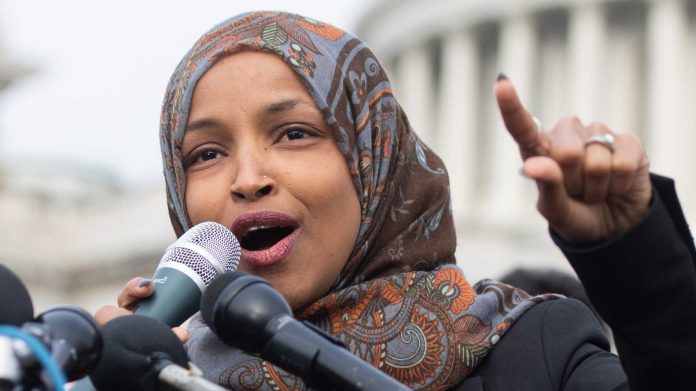 Minnesota’s 5th Congressional District, represented by Rep. Ilhan Omar (D), is the terrorist recruitment capitol of the United States, according to FBI statistics.

FOX News reports that “more men and boys from a Somali American community in Minneapolis have joined – or attempted to join – a foreign terrorist organization over the last 12 years than any other jurisdiction in the country.”

“FBI stats show 45 Somalis left to join the ranks of either the Somalia-based Islamic insurgency al-Shabab, or the Iraq- and Syria-based ISIS combined,” Fox News continued. “And as of 2018, a dozen more had been arrested with the intention of leaving to support ISIS. Both numbers are far higher than those of alleged terrorist wannabes who left or attempted to leave the country from other areas in the country where Muslim refugees have been resettled.”

As FOX notes, “the insular ethnic community in Minnesota offers a rich recruiting ground” for Islamic terrorism as the Somali population in the Minneapolis community — which is located in Omar’s district — is nearly 100,000.

“We are very conscious that there may still be fertile ground for that, and that is could re-start at any time,” one federal official told Fox News. “Based on historical experience, we had (an uptick) in 2007 and 2008 going for al-Shabab, then a lull. Then, as ISIS came back, we saw a whole bunch of people no longer headed for Somalia. They were headed for Iraq and Syria. That really caught us off-guard, we didn’t see that coming. It didn’t make sense to us. We understood why kids were going back to Somalia, but going to Syria was another issue.”

Robin Simcox, a terrorism and national security expert at The Heritage Foundation, told FOX News that “Islamist terror groups have been able to recruit from Minnesota” because Minnesota has a large Muslim population compared to other parts of the U.S.”

“However, it is also because there have been small segments of the Somali community there that have struggled to integrate into the U.S. Al-Shabaab and ISIS have exploited this – upon religious, political cultural and identity issues to offer a compelling alternative to Western democracy,” Simcox added.

In 2013, Omar blamed America’s “involvement in other people’s affairs” for an al-Shabab terrorist attack on a Kenyan shopping mall that year which resulted in nearly 70 deaths and 200 wounded. During that interview, Omar laughed and joked as she talked about Al-Qaeda and Hezbollah.

Omar, who is a known anti-Semite, has faced recent scrutiny over her past advocacy for a group of men who were accused of trying to join ISIS. In a letter to the judge presiding over the case, Omar wrote:

As you undoubtedly deliberate with great caution the sentencing of nine recently convicted Somali-American men, I bring to your attention the ramifications of sentencing young men who made a consequential mistake to decades in federal prison. Incarcerating 20-year-old men for 30 or 40 years is essentially a life sentence. Society will have no expectations of the to be 50 or 60-year-old released prisoners; it will view them with distrust and revulsion. Such punitive measures not only lack efficacy, they inevitably create an environment in which extremism can flourish, aligning with the presupposition of terrorist recruitment: “Americans do not accept you and continue to trivialize your value. Instead of being a nobody, be a martyr.”

The best deterrent to fanaticism is a system of compassion. We must alter our attitude and approach; if we truly want to affect change, we should refocus our efforts on inclusion and rehabilitation. A long-term prison sentence for one who chose violence to combat direct marginalization is a statement that our justice system misunderstands the guilty. A restorative approach to justice assesses the lure of criminality and addresses it.

The desire to commit violence is not inherent to people — it is the consequences of systematic alienation; people seek violent solutions when the process established for enacting change is inaccessible to them. Fueled by disaffection turned to malice, if the guilty were willing to kill and be killed fighting perceived injustice, imagine the consequence of them hearing, “I believe you can be rehabilitated. I want you to become part of my community, and together we will thrive.” We use this form of distributive justice for patients with chemical dependencies; treatment and societal reintegration. The most effective penance is making these men ambassadors of reform.

The restorative approach provides a long-term solution – though the self-declared Islamic State may soon suffer defeat, their radical approach to change-making will continue as it has throughout history – by criminalizing the undergirding construct rather than its predisposed victims. Therein, this ruling can set a precedent and has the potential to be a landmark case in addressing extremism.

Thank you for your careful attention,

Omar has recently come under fire for promoting anti-Semitic conspiracy theories, which has resulted in President Donald Trump and Vice President Mike Pence calling on her to either resign or step down from the House Foreign Affairs Committee.