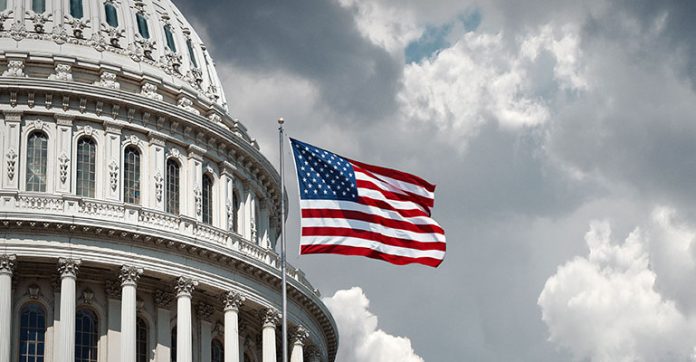 You may not support Democratic candidates, but if H.R. 1 passes, your tax dollars will! That’s just one of the problems with the House’s massive new election law overhaul. They call it the “For the People Act,” but after reading it, you’ll agree — the only people it’s for are in Congress.

When it comes to silencing conservatives, liberals don’t know the meaning of the word quit. Unfortunately, they don’t know the meaning of the word “constitutional” either, because their latest proposal is a 600-page affront to America’s founding document. If H.R. 1 were honestly named, NRO’s David French argued, it would be called the “First Amendment Demolition Act,” or the “Federalism Repeal Act,” or maybe, the “Incumbents Protection Act.” This isn’t about making the elections fair or democratic, as Speaker Nancy Pelosi (D-Calif.) and company would have you believe. It’s about rigging the system, harassing voters, censoring speech, and taking power away from the states.

At more than a ream’s worth of text, it’d be impossible to cover all of the “you’ve-got-to-be-kidding-me” moments in the bill. So let’s just start with the highlights. Democrats want taxpayer-funded campaign ads. That’s right. Under a new political match program, your hard-earned dollars would be shipped off to candidates you don’t even agree with. The idea is that the government would offer “subsidies” (up to six times the donation amount) to people who make small political contributions. In other words, Washington would be forcing taxpayers to fund political campaigns — without ever having a say in whose! Don’t want to see Rep. Alexandria Ocasio-Cortez (D-N.Y.) reelected? Too bad. You’ll be paying for her bumper stickers and robocalls. Likewise for the other side.

Democrats are also going back to the well on a horrible plan they tried to pass in 2010: the DISCLOSE Act. It was a bad idea then — and a worse idea now, when liberal mobs have racked up more than 600 incidents of violence and harassment against conservatives. In the age of “get up in congresspeople’s faces,” “we can’t be civil,” and “when they go low, kick them,” Pelosi has a clever way of drying up GOP funds: scaring donors. Groups like FRC Action would be forced to publicize the names and addresses of anyone who gives to the c4 — even if it’s not for an election campaign. It’s “government-mandated doxxing,” French fumes. Democrats are calling “transparency.” We call it harassment.

“Suppression of political speech is still very real,” Adam Brandon writes in the Washington Examiner, “and H.R. 1 will only exacerbate it.” Naturally, Democrats aren’t concerned about exposing their donors, because the angry mobs are on their side. Their supporters don’t lose jobs for engaging in the political process. Their nonprofits aren’t hunted down by the IRS and threatened about their tax-exempt status. They don’t face character assassination or have to hire extra security for sharing their views. “House Democrats should brush up on their history if they believe exposing the names of donors will lead to free elections,” Brandon warns. “It would do the opposite.” And they know it.

Even the ACLU drew the line at that, writing to House leaders that it would “[harm] our public discourse by silencing necessary voices that would otherwise speak out about the public issues of the day.” As House Majority Leader Kevin McCarthy (R-Calif.) warned, “Democrats did not design H.R. 1 to protect your vote. They designed it to put a thumb on the scale of every election in America and keep the Swamp swampy.”

Not surprisingly, if you like your federalism, you can’t keep it. One of the other charming aspects of H.R. 1 is that it would strip even more power from the states and give it to federal agencies instead. Every democratically-enacted voter ID law would be wiped out in favor of a loose online voter registration system that doesn’t have a single defense against fraud. All 50 states would be “forced to implement early voting, automatic voter registration, same-day registration, online voter registration, and no-fault absentee balloting.” Under this miserable excuse for campaign reform, states wouldn’t even be allowed to draw their own congressional districts. (That’s sure to be effective, since they’ll be controlled by legislators with a personal stake in the elections.)

In one of the more ironic moments of Tuesday’s debate, House conservatives decided to see just how committed Pelosi is to giving every American a voice. Assuming “the People” includes pastors, Rep. Jody Hice (R-Ga.) tried to add the Free Speech Fairness Act to the overall bill. After all, if Democrats want to make sure everyone can participate in the political process, surely they’d be in favor of doing away with the Johnson amendment and let church leaders speak openly again on the issues of the day. Wrong.

“Adding the Free Speech Fairness Act to this bill could have ended the federal government’s practice of silencing churches and other nonprofits who engage in our democracy,” co-sponsor and House Minority Whip Steve Scalise (R-La.) said when the motion was defeated. “Contrary to their claims, this bill is not about promoting election fairness and participation. Democrats are simply eroding American freedoms to suit an agenda that only seems to benefit them, not the American people.”

And this is only the tip of the liberal-leaning iceberg. You might also be surprised to know the bill supports things like D.C. statehood, voter registration for 16-year-olds, prepaid absentee ballots, and much more. It’s time to tell Washington to stop trying to control our votes — and start earning them! Contact your House member and tell them you oppose H.R. 1.