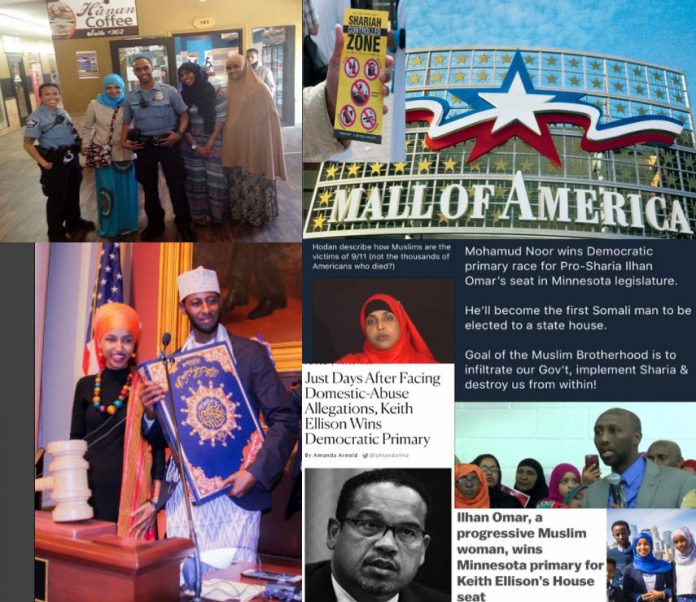 The top law man (AG) in Minnesota is Keith Hakim Ellison, who in 2007, became the first Muslim member of the U.S. Congress (District 5 or “Little Mogadishu” – the highest concentration of Somali-Muslim refugees in the country).  In a then-controversial move, he swore his oath of office on a Koran, a document that commands Muslims to kill non-Muslims.  (Now, this is a routine practice for Muslim office holders).

At a 2010 Muslim American Society (an MB front) fundraiser hosted by a self-proclaimed supporter of Hezbollah (Esam Omeish), Ellison announced, “And I am telling you, that with your help, we are able to take the Muslim presence on Capitol Hill from zero to a real player.  And this is what we’re trying to do and we got to do it in every state house in America…positioning Muslims in general to steer the ship of state in America.”

Of course, Ellison regularly attends CAIR/Hamas functions and receives contributions from MB donors involved in terrorist financing.  He went from being a representative for District 5 in Minnesota with a population of 108,000 to the top law man in Minnesota with the power to control judicial decisions for 5.5 million people.  This despite being charged for sexual assault by two women.  While Keith Hakim Ellison was in Congress, 45 Somali Muslims were believed to have joined or attempted to join ISIS or Al Shabaab.  Ellison ignored concerns about terrorist financing and opposed efforts to curb cash transfers to Somalia (zakat for jihad).

Ellison and CAIR run the state now and it is speculated (and feared) that “diversity hire” Mohammed Noor, who murdered pajama-clad, unarmed Justine Damond in cold blood while she was reporting a crime in progress, could get off with a slap on the wrist.  Many Minnesotas believe other cases were decided in favor of Muslim perpetrators due to Ellison’s and CAIR’s influence.  See below.  Could the following cases have possibly been “fixed” for Somali Muslim refugees:

Minnesota’s legislative auditor said Wednesday that an investigation found no proof that money defrauded from a state child care program found its way to terrorist organizations overseas.  Lawmakers asked Legislative Auditor James Nobles to look into the issue after KMSP-TV reported last year that the Minnesota Child Care Assistance Program was defrauded out of as much as $100 million per year. The station, partly citing unnamed sources, also reported that state and federal agents had determined that some of the ill-gotten money had gone overseas and that they believed at least some of it likely ended up with terrorists.  The station’s reports, which also cited Scott Stillman, a former computer forensics expert for the state Department of Human Services, which administers the program, suggested that fraudulently obtained money had gone to the Somali-based terrorist group al-Shabab…

ST. PAUL, Minn. (FOX 9) – A government watchdog report on the scope of fraud in Minnesota’s Child Care Assistance Program (CCAP) is unable to offer a reliable estimate of how much fraud actually exists…   A report released Wednesday by the Office of Legislative Auditor (OLA) said it did not find evidence that as much as $100 million annually is being ripped off from the program. But, the report said the level of fraud is more than the $5 to $6 million prosecutors from across the state have been able to prove… The OLA report includes an assessment from Jay Swanson, who manages the Minnesota Department of Human Services unit which investigates child care assistance fraud. According to Swanson’s assessment, the “overall fraud rate in this program is at least 50 percent of the $217 million paid to child care centers in 2017.” But, the OLA said it could not find evidence to substantiate that number… Another allegation originally reported by FOX 9 was that state and federal authorities were concerned that some of the CCAP funds were being sent overseas and that some of the money was being skimmed by terrorist organizations. The report said it was unable to substantiate the allegation, but did acknowledge it’s a possibility. In testimony before state lawmakers, Legislative Auditor James Nobles said, “we cannot say definitely that it has occurred, but we cannot say that it has not.”  The report goes on to say, “We found that federal regulatory and law enforcement agencies are concerned that terrorist organizations in certain countries, including Somalia, obtain and use money sent from the United States by immigrants and refugees to family and friends in those countries.”…This woman (below) could possibly get off – perhaps “mental illness”:

“You guys are lucky that I don’t know how to build a bomb because I would have done that.”

Tnuza Jamal Hassan, a college student from Minneapolis, has been charged with intentionally setting four fires at St. Catherine’s University in St. Paul to “protest” against President Trump.

Of course, openly anti-Jewish, America-hating, Ilhan Omar, who most likely committed bigamy and immigration fraud by marrying her brother, took over Keith Ellison’s congressional seat in January 2019.  While a member of the Minnesota House of Representatives, she voted AGAINST making FGM a felony and opposed STOPPING insurance payments to families of terrorists who attacked Americans.