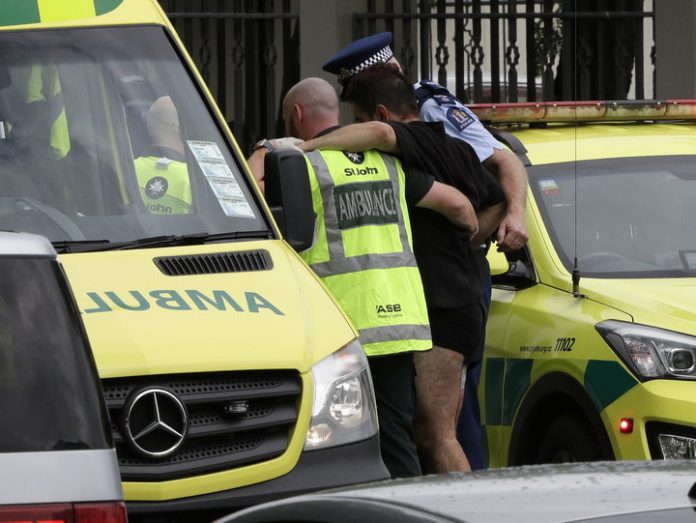 I do not know Bill Muelenberg, but as a fellow writer he expresses everything I feel on this day after the horrific attack on two mosques in Christchurch, New Zealand. I was planning to write something but then came across his brilliant essay and decided there was nothing I could say or add that would be any more appropriate. Muehlenberg blogs at Culture Watch, where you can find the below article in its entirety.

Two mosques in Christchurch were targeted by gunmen with multiple fatalities. As I write it seems that around 50 people may have been killed and many injured. This is a horrible day for New Zealand and we need to keep all the victims and their families in our prayers.

One 28-year-old man, who has been identified as Brenton Tarrant from NSW, Australia, seems to have videoed the attack. Sadly it is making the rounds on the social media. It is claimed he did this in protest against Islam, Western immigration policies, and related grievances. We will learn much more about him and any others involved in this in due course. It is still early days yet as to who exactly was involved, and why.

I and all people of good will fully and unequivocally condemn this attack. Without question those who are responsible for this should face the full force of the law. There is no place for such violence and there is absolutely no justification for this attack. I take it that New Zealand does not have the death penalty, but if it did, these individuals would fully deserve it.

Those responsible for this were fully given over to evil, and it is appalling that they could get away with such reprehensible acts. If anyone who is a friend or colleague of mine in any way supports this, applauds this, or cheers this on, they are NOT my friends and colleagues. If I find anyone on the social media who is a friend of mine who supports this, they will be swiftly unfriended.

I have never condoned a tit-for-tat response here, nor advocated for violence and murder, and will keep working to share my concerns about some of these things in a peaceful manner. Legitimate concerns about runaway immigration, creeping sharia and the like are fully fair and need to be heard. But resorting to what the jihadists do daily is not the way to proceed.

Indeed, it is at this point that we need to be reminded of some home truths. It is perfectly clear that this sort of violence and terrorism is perpetrated on a daily basis against Christians, Westerners and others by Muslim attackers all around the world.

As one example, a new report by Open Doors notes that 11 Christians are killed every day for their beliefs, mostly by Muslims. It looks at the ten most dangerous nations for Christians, and finds eight of them are Islamic nations.

But because such killings and attacks are so utterly common and routine, there is next to no media coverage of them, nor much outrage about them. Moreover, every time another Islamic jihad attack occurs, especially in the West, everyone seems to bend over backwards and claim this has nothing to do with Islam and we should not even speak about Islam. They say the Muslim religion should not be tarred and feathered because of the actions of these terrorists.

Yet even in these early stages, we can see how the leftist media will be operating: they will put this attack down to right wing views, to Christianity, to anti-immigration groups, to the conservative alternative media, and so on. It will be open season on anyone and anything even remotely resembling a conservative, a Christian, or those who have expressed legitimate concern about border policies, unchecked multiculturalism, stealth jihad and the like.

Already I have heard journalists at New Zealand press conferences asking, “Have we been paying too much attention to Muslim terrorism?” Incredible. Anywhere from 200 to 600 million people have been murdered in the past 1400 years in the name of Islam.

So now we get an evil fool doing this at some mosques, and we are now just supposed to forget all about the other terrorism, and pretend that Islam is a religion of peace? Yes non-Muslims can and do commit acts of horrible violence and terror, but not even bloodthirsty ideologies like godless communism came close to killing as many people in terms of sheer numbers.

Again, the media, most political leaders and most experts are already speaking of how Muslims are living in fear, and are talking as if they experience such fear every day. Um, they have NOT been the main victims of terrorism acts. They have been the main perpetrators.

And as mentioned the blame game is already happening. As just one example, one social media post said this was directly due to the words and policies of people like Pauline Hanson and Fraser Anning. Already we have talk about stricter gun control. Already we have those wanting to clamp down further on conservative sites, and so on.

Australian Prime Minister Scott Morrison has already referred to the assailant as “an extremist, right-wing, violent terrorist.” Already there are those who are speaking of Christians and conservatives and white supremacists, etc., and how they are part of the blame here. Never mind that it seems that on Brenton Tarrant’s social media pages he spoke of being into paganism and Odin worship, etc.

One person on the social media has reminded us how a tragedy like the 1933 Reichstag Fire in Germany helped prepare the way for the Nazis to consolidate their power even further. The arson attack happened four weeks after Hitler was sworn in as the German Chancellor, and he swiftly used it to clamp down on his ideological foes.

Sadly we have enough examples of this happening with the left whenever something like this happens. They are ever ready to demonize their political opponents and become opportunists to push their agendas. Watch for more of it to happen in this case. And in the meantime, most folks will continue to wonder why we seem to have so many double standards here.

For example, we have just learned through ABC News that one apparent Muslim terrorist who had planned to bomb an entire plane might be given a free pass: “An Australian-Lebanese man in custody on terrorism charges in Lebanon will be freed on bail this week, after the Australian government agreed to hand over crucial documents. Amer Khayat, 41, is accused of plotting to blow up an Etihad plane on a flight from Sydney to Abu Dhabi in July 2017 using two bombs — one hidden in a meat grinder and another hidden in a Barbie doll.”

All such killing and attempted killing must be fully and soundly condemned. But the actual historical record here is all one-way traffic. Most acts of terrorism conducted around the world are Islamic attacks. Since 9/11 alone there have been nearly 35,000 deadly Islamic terror attacks. These hard truths also need to be kept in mind as we mourn with our overseas neighbors.