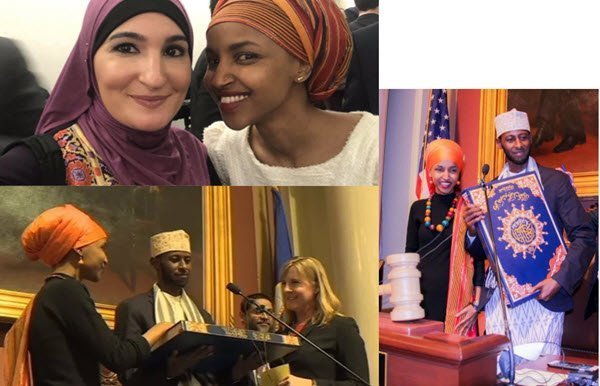 Rep. Ilhan Omar from Minnesota poses an interesting case study in American cultural or civilizational consciousness.  She is the first congressional representative to wear a scarf around her head, and that scarf is for some a symbol of the breadth and depth of our acceptance of others.  For others, it is a symbol of alienation and rejection of the America she claims — simply by holding office — to represent.  To those who see her this way, the hijab or head covering is seen as a hostile schmata (rag) whereby she is not merely carrying on one of her subculture’s customs, but, in essence, giving the finger to the country she now would participate in governing.

To those who admire her motivation and political know-how, the headscarf adds to the attraction of her looking frail and vulnerable.  Looking frail and vulnerable, yet being a political high achiever, she seems to fit the rags-to-riches mythology of our culture.  Those who are attracted by this transition into the halls of power may not see her hijab as a mere headscarf or as a rag.  To them, this headgear is a crown dignifying her claim to power.  Is she a stinking terrorist in sheep’s clothing?  Or is she just a little know-nothing from a nowhere country elected by a bizarre and backward district in Minnesota?  Or does she express the promise of America to give leadership and success to those for whom it has been blocked, sometimes, for centuries?

Anyone from anywhere can make his home here.  Even more than make a home, all persons can participate in the governance of this country.  Was that not true of the Germans, the Scandinavians, the Irish, the Italians, the West Indians, the Greeks, the Eastern Europeans?  So, rather than being seen as a threat, many see Rep. Omar as a victory of American culture over the inherent divisiveness of a hate-filled world.

However, her many anti-Semitic comments since she has taken office intensify the debate. She talks about the Jewish power through “Benjamins” ($100 bill pictures of Ben Franklin), about AIPAC buying illegitimate influence, and about Jewish dual loyalty to Israel as well as the USA (with no mention of her possible triple loyalty to the USA; Somalia; and Islam, which is as much a political as a religious system).  Her defenders, like Speaker Nancy Pelosi, say these comments are reflections of mere rhetorical inexperience, and not of deep-seated anti-Semitism.  Does she not know that the USA was the first country to recognize the existence of Israel as a nation-state?  Does she not know that when Jews were disparaged and worse in Europe, they found a haven in these United States going back to the 17th century because freedom of conscience was so valued?  Acceptance of Jewish people is not just a matter of current events, but part of the foundation of liberty in this country.

In effect, then, her comments blew her cover.  She cannot simply be seen as a highly motivated immigrant who has made her way to one of the higher offices in the land, someone who is simply living out the Horatio Alger ideal of rags to riches in America.  She has revealed herself as someone with an agenda, an agenda where she is willing to attack the community most in favor of Islamic immigration and the diversity she seems to represent.

Not only is she filled with intolerable hatred, but she is a kind of Trojan horse.  The appearance of vulnerability belies monstrous problems.  Is she just a poor, misguided foreign-born child?  No way.  Rather, her presence as a welcome dispossessed minority runs parallel to a story by that great writer, Isaac Bashevis Singer, “The Gentleman From Cracow.”

One day, a young Jewish doctor moved from Cracow to the impoverished Jewish village of Frampol.  He is welcomed and perceived as a special asset to the town.  Not only is he wealthy and generous, but at one point in time, surrounded by his opulence, he declares to the villagers, “The Ruler of the Ten Lost Tribes of Israel knows of your miseries, and he has sent me to be your benefactor.  But there is one condition.  Tonight, every virgin must marry.  I will provide a dowry of ten thousand ducats for each maiden, as well as a string of pearls down to her knees.”  The people are amazed by this offer and scurry to meet his demands.  The rich man agrees even to marry Hodle, the degraded town slut.  One old man, seeing how degraded the process was becoming, with the now betrothed young virgins lifting their skirts to catch his gold coins, called out, “Woe to us, woe to us, Jews!  A fire is upon us, burning, Jews, Satan’s fire.  Save your souls, Jews.  Flee, before it is too late!”  But the townspeople, thrilled by the sudden dispensation of wealth, gagged the old man.  The rich young doctor revealed his true identity: “He was none other than Ketev Mriri, Chief of the Devils.”  At that point, the entire underworld seemed to burst forth, as Singer narrates: “[w]itches, werewolves, imps, demons, and hobgoblins plummeted from the sky, some on brooms, others on hoops, still others on spiders.  Osnath, the daughter of Machlath, her fiery hair loosened in the wind, her breasts bare and thighs exposed, leaped from chimney to chimney, and skated along the eaves.”  The gagged old man, clutching his head, died.

Omar, along with Rashida Tlaib, and some other Dem fellow travelers who are delighted to see “diversity” in Congress, are human doors leadings to untold diabolical strategies.  We must remain vigilant as the danger of further militant Islamic encroachment in our government grows.  We cannot forget that there have already been multiple murderous attacks on innocents in our beloved USA by militant Islamists, who, like Omar, hate Jews and Israel.  In other words, the voices against her are not sufficiently condemnatory, whether those congressional voices be Jewish or non-Jewish.  Excluding her from the House would be an optimal response, but research into this option indicates to this writer that this is not feasible.  Thus, while removing her from the House Foreign Relations Committee would be a weak and insufficient action, it is the strongest possible action that can be taken to demonstrate that as a country, we are resolute against the thinking and speech she has exhibited.

Additionally, major Jewish organizations should do what the Left would do if it were belittled in the same way as Omar has denigrated Jews.  They should picket the offices of Nancy Pelosi and Ilhan Omar.  Signs should read “Jew-haters resign” or “America is not a land of hate.”  At the same time, the picketers should be chanting, “It’s not too late to stop the hate!”  Let’s start seeing this on the evening news. [emphasis added to encourage the effort recommended here!]