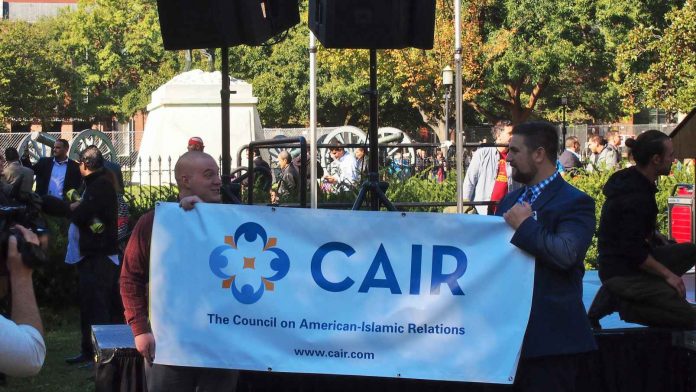 The Freedom of Conscience Defense Fund forced an unprecedented lawsuit settlement on the San Diego Unified School District, which partnered with the terrorism-linked Council on American-Islamic Relations, requiring the district to shut down its discriminatory, unconstitutional “anti-Islamophobia initiative.”

The embattled CAIR was named an unindicted co-conspirator in 2007 in an alleged criminal conspiracy to support both HAMAS and the Holy Land Foundation for Relief and Development. In 2014 the United Arab Emirates designated CAIR a terrorist organization.

CAIR, which poses as a Muslim civil rights organization, falsely claimed that President Trump’s election caused a wave of attacks on Muslim students in the San Diego school district.

In fact, the discrimination ran the other way, against those who were not Muslim.

“CAIR’s insinuation that there are hordes of MAGA hat-wearing students prowling the schools and terrorizing Muslim students is a study in mass deception,” said Charles LiMandri, chief counsel for FCDF.

The Shillman Foundation provided funding to the Rancho Santa Fe, California-based Freedom of Conscience Defense Fund to pursue this case in federal court.

David Horowitz, founder of the David Horowitz Freedom Center (publisher of FrontPage), recognized Shillman for his vital contribution to this legal triumph. “Our patron, Dr. Bob Shillman was behind this victory. Bob is a fighter and we are proud of our association with this stand-up American.”

“Under the guise of promoting inclusivity, CAIR had unfettered power to target conservative Christian students and smear them as ‘Islamophobic’ if they don’t accept Islam. More broadly, the liberal school board ran roughshod over the First Amendment by empowering CAIR to indoctrinate impressionable children. We applaud our clients for standing up and fighting back.”

As part of its Project for Religious Liberty in America’s Schools, FCDF informs school authorities nationwide about CAIR’s Islamist infiltration agenda as well as the organization’s ties to terrorism. Among the school districts affected are Seattle Public Schools, Minneapolis Public Schools, Cajon Valley Unified School District, and Gilroy Unified School District. FCDF said it has sent policy memos to the U.S. Department of Justice and U.S. Department of Education, advising them of the pernicious effects of so-called “anti-Islamophobia” initiatives in public schools.

In May 2017, FCDF filed suit in U.S. District Court for the Southern District of California on behalf of five families and two advocacy organizations, Citizens for Quality Education and San Diego Asian Americans for Equality. The legal complaint asserted that the San Diego Unified School District’s “anti-Islamophobia initiative,” launched to fight purported anti-Muslim bullying somehow allegedly inspired by President Trump, violated the First and Fourteenth Amendments to the U.S. Constitution.

It is important to note that the made-up word “Islamophobia” is wielded as a cudgel against those who dislike the Muslim religion and those who are merely skeptical of it, as this writer argued in Team Jihad: How Sharia-Supremacists Collaborate with Leftists to Destroy the United States, published in 2017 by Center for Security Policy Press.

The idea is to eventually make it as difficult and uncomfortable as possible to criticize the faith founded by Muhammad in the seventh century after the birth of Christ. And a lot of well-heeled funders are part of a long-term campaign aimed at mainstreaming the tenets of Islam in American society.

The political correctness that has metastasized in American culture aids Islamist groups like CAIR by requiring that no one speak ill of Islam or say anything that might stigmatize or “other-ize” a Muslim in any way. All Americans must think and say only nice things about Islam. CAIR and its ilk are determined to stamp out criticism of Islam, and they have an army of nonprofit organizations, foundations, academics, media outlets, and name-calling activists to help them.

But the law is not on CAIR’s side in this case.

Under the guise of this anti-bullying program, Defendants have fallen in with the aforementioned religious organization to set up a subtle, discriminatory scheme that establishes Muslim students as the privileged religious group within the school community. Consequently, students of other faiths are left on the outside looking in, vulnerable to religiously motivated bullying, while Muslim students enjoy an exclusive right to the School District’s benevolent protection.

The school district’s program, developed with CAIR, required training on “how to become allies to Muslim students,” and allowed CAIR officials to teach students about Islamic religious practices and change school curricula to provide an “inclusive” portrayal of Islam. Students and parents had to watch biased videos

The program at issue began in April 2017 based on the lie that Trump’s election caused a tidal wave of Islamophobia to swamp schools. As FCDF argued in the lawsuit, the district accepted bogus evidence from Muslim students and skewed “bullying” surveys that generated questionable evidence of discrimination against Muslims. State records indicate there is no evidence of so-called Islamophobia in the school district.

CAIR isn’t the only well-funded radical group pushing the line that Trump’s ascendancy has ushered in a new age of intolerance. The far-left Southern Poverty Law Center, which in recent days pushed out its founder, Morris Dees, and its president, Richard Cohen, unveiled an ambitious propaganda offensive in 2017 called “The Trump Effect.”

The legal complaint against the San Diego Unified School District stated that its CAIR-sponsored program ran afoul of the Constitution for singling out Muslim students for preferential benefits and for giving CAIR what amounted to governmental decision-making authority, which in the process unconstitutionally entangled government with religion.

Under the terms of the legal settlement, the school district had to permanently drop the program and not permit CAIR to spread propaganda in its schools.

The district is required to make sure that all students are equally protected from bullying and harassment, regardless of religion. The district sent out a policy memo to area superintendents and principals about the First Amendment’s “limits on the conduct of public school officials as it relates to religious activity.”

School officials have been instructed to correct the pro-Muslim bias and blatantly disproportionate emphasis on Islamic history in the curriculum.

Educators now have to “treat each religion with equal respect, with the time and attention spent discussing each religion being proportionate to its impact on history and human development and the material presented in its historical context.”

Educational materials dealing with religious subject matter “must be neutral and may not be presented in a manner that promotes one religion over another.”

School officials inviting guest speakers to district events “must ask them not to use their position or influence on students to forward their own religious, political, economic or social views or and shall take active steps to neutralize whatever bias has been presented.”

Guest speakers from religious organizations “are not permitted to present to students on religious topics.”

“This is a tremendous victory against radical Islamic indoctrination in America’s schools,” said LiMandri. “This settlement agreement will serve as a warning to politically correct school boards nationwide to think twice about partnering with CAIR.”