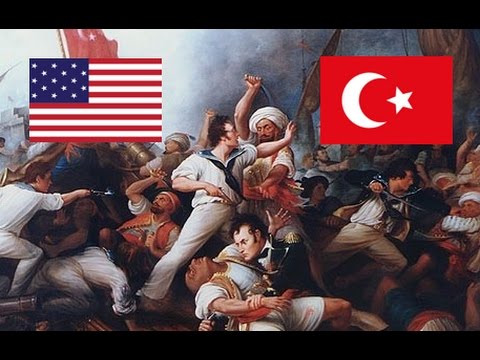 Exactly 233 years ago this week, two of America’s founding fathers documented their first exposure to Islamic jihad in a letter to Congress; like many Americans today, they too were shocked at what they learned.

Context: in 1785, Muslim pirates from North Africa, or “Barbary,” had captured two American ships, the Maria and Dauphin, and enslaved their crews. In an effort to ransom the enslaved Americans and establish peaceful relations, Thomas Jefferson and John Adams — then ambassadors to France and England respectively — met with Tripoli’s ambassador to Britain, Abdul Rahman Adja. Following this diplomatic exchange, they laid out the source of the Barbary States’ hitherto inexplicable animosity to American vessels in a letter to Congress dated March 28, 1786:

We took the liberty to make some inquiries concerning the grounds of their [Barbary’s] pretentions to make war upon nations who had done them no injury, and observed that we considered all mankind as our friends who had done us no wrong, nor had given us any provocation. The ambassador answered us that it was founded on the laws of their Prophet, that it was written in their Koran, that all nations who should not have acknowledged their authority were sinners, that it was their right and duty to make war upon them wherever they could be found, and to make slaves of all they could take as prisoners, and that every Musselman who should be slain in battle was sure to go to Paradise

One need not conjecture what the American ambassadors — who years earlier had asserted that all men were “endowed by their Creator with certain inalienable rights” — thought of their Muslim counterpart’s answer.  Suffice to say, because the ransom demanded was over fifteen times greater than what Congress had approved, little came of the meeting.

It should be noted that centuries before setting their sights on American vessels, the Barbary States of Muslim North Africa — specifically Tripoli, Algiers, Tunis — had been thriving on the slave trade of Christians abducted from virtually every corner of coastal Europe — including Britain, Ireland, Denmark, and Iceland.  These raids were so successful that, “between 1530 and 1780 there were almost certainly a million and quite possibly as many as a million and a quarter white, European Christians enslaved by the Muslims of the Barbary Coast,” to quote American historian Robert Davis.

The treatment of these European slaves was exacerbated by the fact that they were Christian “infidels.”  As Robert Playfair (b.1828), who served for years as a consul in Barbary, explained, “In almost every case they [European slaves] were hated on account of their religion.”  Three centuries earlier, John Foxe had written in his Book of Martyrs that, “In no part of the globe are Christians so hated, or treated with such severity, as at Algiers.”

The punishments these European slaves received for real or imagined offenses beggared description: “If they speak against Mahomet [blasphemy], they must become Mahometans, or be impaled alive. If they profess Christianity again, after having changed to the Mahometan persuasion, they are roasted alive [as apostates], or thrown from the city walls, and caught upon large sharp hooks, on which they hang till they expire.”

As such, when Captain O’Brien of the Dauphin wrote to Jefferson saying that “our sufferings are beyond our expression or your conception,” he was clearly not exaggerating.

After Barbary’s ability to abduct coastal Europeans had waned in the mid-eighteenth century, its energy was spent on raiding infidel merchant vessels. Instead of responding by collectively confronting and neutralizing Barbary, European powers, always busy quarrelling among themselves, opted to buy peace through tribute (or, according to Muslim rationale, jizya).

Fresh meat appeared on the horizon once the newly-born United States broke free of Great Britain (and was therefore no longer protected by the latter’s jizya payments).

Some American congressmen agreed with Jefferson that “it will be more easy to raise ships and men to fight these pirates into reason, than money to bribe them” — including General George Washington: “In such an enlightened, in such a liberal age, how is it possible that the great maritime powers of Europe should submit to pay an annual tribute to the little piratical States of Barbary?” he wrote to a friend. “Would to Heaven we had a navy able to reform those enemies to mankind, or crush them into nonexistence.”

But the majority of Congress agreed with John Adams: “We ought not to fight them at all unless we determine to fight them forever.” Considering the perpetual, existential nature of Islamic hostility, Adams may have been more right than he knew.

Congress settled on emulating the Europeans and paying off the terrorists, though it would take years to raise the demanded ransom.

When Muslim pirates from Algiers captured eleven more American merchant vessels in 1794, the Naval Act was passed and a permanent U.S. naval force established. But because the first war vessels would not be ready until 1800, American jizya payments — which took up 16 percent of the federal budget — began to be made to Algeria in 1795. In return, over 100 American sailors were released — how many died or disappeared is unclear — and the Islamic sea raids formally ceased. American payments and “gifts” over the following years caused the increasingly emboldened Muslim pirates to respond with increasingly capricious demands.

One of the more ignoble instances occurred in 1800, when Captain William Bainbridge of the George Washington sailed to the pirate-leader of Algiers, with what the latter deemed insufficient tribute. Referring to the Americans as “my slaves,” Dey Mustapha ordered them to transport hundreds of black slaves to Istanbul (Constantinople).  Adding insult to insult, he commanded the American crew to take down the U.S. flag and hoist the Islamic flag — one not unlike ISIS’ notorious black flag — in its place.  And, no matter how rough the seas might be during the long voyage, Bainbridge was required to make sure the George Washington faced Mecca five times a day to accommodate the prayers of Muslims onboard.

That Bainbridge condescended to becoming Barbary’s delivery boy seems only to have further whetted the terrorists’ appetite.  In 1801, Tripoli demanded an instant payment of $225,000, followed by annual payments of $25,000 — respectively equivalent to $3.5 million and $425,000 today.  Concluding that “nothing will stop the eternal increase of demand from these pirates but the presence of an armed force,” America’s third president, Jefferson, refused the ultimatum. (He may have recalled Captain O’Brien’s observation concerning his Barbary masters: “Money is their God and Mahomet their prophet.”)

Denied jizya from the infidels, Tripoli proclaimed jihad on the United States on May 10, 1801. But by now, America had six war vessels, which Jefferson deployed to the Barbary Coast.  For the next five years, the U.S. Navy warred with the Muslim pirates, making little headway and suffering some setbacks — the most humiliating being when the Philadelphia and its crew were captured in 1803.

Desperate measures were needed: enter William Eaton. As U.S. consul to Tunis (1797–1803), he had lived among and understood the region’s Muslims well. He knew that “the more you give the more the Turks will ask for,” and despised that old sense of Islamic superiority: “It grates me mortally,” he wrote, “when I see a lazy Turk [generic for Muslim] reclining at his ease upon an embroidered sofa, with one Christian slave to hold his pipe, another to hold his coffee, and a third to fan away the flies.” Seeing that the newborn American navy was making little headway against the seasoned pirates, he devised a daring plan: to sponsor the claim of Mustafa’s brother, exiled in Alexandria; and then to march the latter’s supporters and mercenaries through five hundred miles of desert, from Alexandria onto Tripoli.

The trek was arduous — not least because of the Muslim mercenaries themselves. Eaton had repeatedly tried to win them over: “I touched upon the affinity of principle between the Islam and Americans [sic] religion.” But despite these all too familiar ecumenical overtures, “We find it almost impossible to inspire these wild bigots with confidence in us,” he lamented in his diary, “or to persuade them that, being Christians, we can be otherwise than enemies to Mussulmen. We have a difficult undertaking!” (For all his experience with Muslims, Eaton was apparently unaware of the finer points of their (Sharia) law, namely, al-wala’ wa’l bara’, or “loyalty and enmity.”)

Eaton eventually managed to reach and conquer Tripoli’s coastal town of Derne on April 27, 1805.  Less than two months later, on June 10, a peace treaty was signed between the U.S. and Tripoli, formally ending hostilities.

Thus and despite the (rather ignorant) question that became popular after 9/11, “Why do they hate us?” — a question that was answered to Jefferson and Adams 233 years ago today — the United States’ first war and victory as a nation was against Muslims, and the latter had initiated hostilities on the same rationale Muslims had used to initiate hostilities against non-Muslims for the preceding 1,200 years.

Sources for quotes in this article can be found in the author’s recent book, Sword and Scimitar: Fourteen Centuries of War between Islam and the West; 352 pages long and containing over a thousand endnotes, it copiously documents what many in academia have sought to hide: the long and bloody history between Islam and the West, in the context of their eight most landmark battles.  American Thinker reviews of the book can be read here and here).