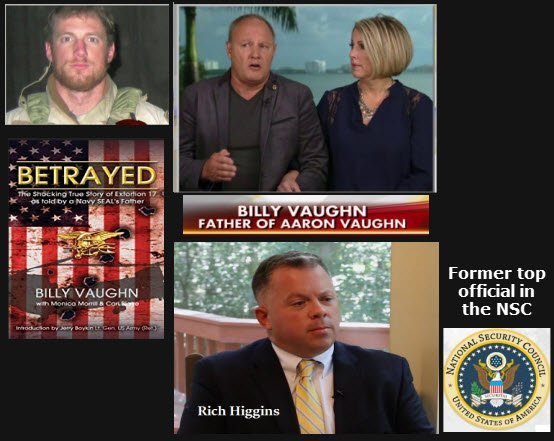 Gold Star Dad, Billy Vaughn, and National Security Council whistleblower, Rich Higgins know first-hand The Enemies Within the Deep State whose mission is to destroy President Trump and the movement that elected him – That would be US!

Richard Higgins, an irregular-warfare expert with decades of intelligence experience, was serving in the National Security Council’s strategic planning office when he says he was alerted by “good guys at FBI” about a high-level, coordinated effort to subvert the president. He drafted a memo, “POTUS and Political Warfare,” which detailed “withering information campaigns” directed against Trump by “ ’deep state’ actors, globalists, bankers, Islamists, and establishment Republicans.” (See his memo here.)

“Do we continue to exist as a Republic under the Constitution? That’s how important this is. If we move past this with no prosecutions and nobody going to prison for this, I think we have officially, then, entered the post-Constitutional era and I don’t know if we’ll ever recover it. “ [RH]

“History will understand that the Republican Party served as the defeat mechanism of the American experiment in that they got elected on issues that they never intended to address.” [RH] (emphasis added)

Billy and Karen Vaughn are the parents of fallen Navy SEAL, Aaron Carson Vaughn (SEAL Team VI). On August 6, 2011 Aaron was killed in action in the Tangi River Valley of Afghanistan when a chopper (call sign Extortion 17) carrying thirty Americans was shot from the sky. The day Aaron’s life ended theirs began again.

In the months following this devastating loss the Vaughns began searching for answers. What they learned was life-altering. They quickly came face-to-face with their worst nightmare…the downing of Extortion 17 was at best unnecessary and at worst, a negligent, reckless loss of life.

Learn more about why it is critical to understand why Billy is speaking out, watch/listen to this: SEAL Team SIX – Betrayed – Operation Lefty Grove – Extortion 17

Follow Billy and Karen’s next steps to remember their son and the great work they are doing for other fallen soldier’s families: Operation 300

Are we engaged in World War III? You decide!