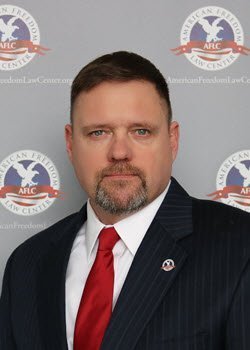 An expert in constitutional law litigation, Robert Muise has filed a federal civil rights lawsuit against Michigan Attorney General Dana Nessel to stop her from using the Southern Poverty Law Center’s list of hate groups as a prototype for a new hate crimes unit to prosecute hate crimes and review groups identified by the SPLC. The lawsuit claims that the AG’s new policy legitimizes the “radical, leftist” SPCL’s efforts to “marginalize” political opponents by targeting them as hate groups.

The suit is critical in stopping the Michigan state government from weaponizing the taxpayer-funded state AG’s office to silence conservative voices and organizations and deal a death blow to our sacrosanct First Amendment rights.

Muise is co-founder and Senior Counsel of the American Freedom Law Center, dedicated to defending religious liberties, the freedom of speech, and the right to life in state and federal trial and appellate courts all across the country.

American Freedom Law Center is a non-profit, registered 501c3, and they take on the “bad guys” that most attorneys will NOT touch! AND… they do it at NO COST to the person or group they are defending. This is year 7 that Robert Muise and David
Yerushalmi have been doing this and God bless them for many more! National Review columnist Andrew C. McCarthy said, AFLC is “the leading public interest law firm fighting . . . in America.”

Please consider donating to keep them able to support and defend the Constitution and our Freedom & Liberties! Check out their website for all current cases and ones they’ve taken on: https://www.americanfreedomlawcenter.org/

From their own website:
There is no other public interest law firm that has been as effective against the enemies of freedom, particularly those enemies who engage in what the Muslim Brotherhood itself describes as “civilization jihad.”

Thank you, Robert Muise, for your service to America in uniform and now in a suit in the courtroom!