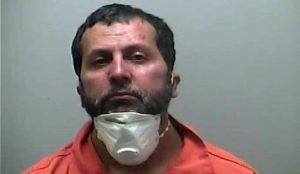 The victim card keeps on getting played, even in the most preposterous of circumstances, such as in this case, apparently because it continues to work. Amor Ftouhi’s lawyers claim he suffered as a Muslim in Canada, one of the world’s most welcoming countries, and that his jihad attack was not jihad, despite his repeated avowals that he stabbed the policeman for Allah. The worst aspect of this is that some people are likely to fall for it.

“Lawyers for Montreal man convicted of U.S. terrorist attack argue he was victim of discrimination in Canada,” by Stewart Bell, Global News, April 11, 2019 (thanks to the Geller Report):

A Montreal man convicted of terrorism for a 2017 knife attack at a U.S. airport was disappointed with his life in Canada and wanted to die by “killing to be killed,” his lawyers argued Thursday.

The lawyers asked for a 25-year-sentence for Amor Ftouhi, who travelled to Michigan on a “mission” to kill U.S. government employees but was subdued after stabbing a police officer.

In their sentencing submission, the lawyers said Ftouhi had immigrated to Canada from Tunisia in 2007 but lived off welfare and worked at “menial jobs,” which they attributed to Canadian intolerance.

“Mr. Ftouhi’s struggle to find employment was not unique to him. He was among many Muslims in Canada (Quebec especially) experiencing discrimination and Islamophobia,” they argued, citing the January 2017 Quebec mosque shooting.

Rather than an ideological extremist, Ftouhi was hopeless as a result of being “wholly unprepared for the challenges he would face both as a first-generation immigrant and as a Muslim in a predominantly Christian city,” they wrote.

The 51-year-old former school janitor and delivery driver was convicted of terrorism last November for the June 21, 2017, stabbing of an officer at Bishop International Airport in Flint, Michigan.

He faces a possible life sentence at a hearing next week.

Following the attack, he told the FBI he was a “soldier of Allah,” supported the ideology of al-Qaida and believed the United States was the enemy.

“Ftouhi stated he wanted to kill a USG [U.S. government] employee at a location that would receive worldwide attention and therefore, Donald Trump would hear him,” according to an FBI report.

“Ftouhi wanted other Muslims to see his actions and not be afraid to fight the enemies of Allah.”

The FBI report, a seven-page summary of Ftouhi’s statement on the day of his arrest, said he had been a supporter of Osama bin Laden [UBL] long before coming to Canada and had planned to kill police officers.

While living in Tunisia, Ftouhi told the FBI, he had “celebrated” the Sept. 11, 2001, killings and praised bin Laden for organizing them. He said he was “upset” when bin Laden was killed.

“Ftouhi believes there is a war on Muslims and agrees with UBL’s statements that the USG is the problem. Ftouhi stated that when AQ [al-Qaida] and UBL attacked the USG, it was done for Allah.”

He also claimed he was a victim of discrimination in Montreal because his car tires were once slashed, he didn’t get prayer breaks at work and he missed out on delivery jobs because he refused to transport alcohol.

After losing his driving job, he decided “enough was enough and it was time for him to act,” the FBI wrote.

He researched how to buy a firearm in the U.S. and drove to a Michigan gun show but vendors wouldn’t sell to him because he wasn’t a U.S. citizen. Instead, he bought a $15 knife.

He then began searching for targets, settling on the Flint airport. The day before the attack, he visited the airport and observed police, then slept in his vehicle in a nearby parking lot….