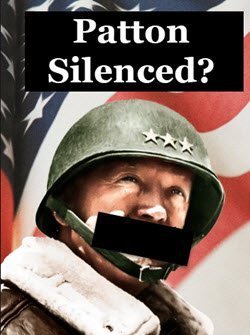 U.S. Army general George S. Patton, renowned for strategic military prowess and leadership, led World War II troops into Casablanca, Sicily, and France; relieved Allied forces at the Battle of the Bulge; and drove deep into Nazi Germany.  Patton was equally renowned for his no-holds-barred opinions, colorful attire, profanity-laced speeches, and disregard for orders he thought ineffective, all of which did not sit well with the Allied high command.

The new “must see” film, Silence Patton, suggests that the general’s premature death in a mysterious auto accident may have been orchestrated to silence this oversized, historic personality.  Written and directed by Robert Orlando, the film uses documentary footage, direct quotes, and interviews with historians to ask whether Patton’s forthrightness, outspoken judgments, and criticism of battlefield leadership may have led to assassination.  Robert Wilcox, an investigative and military reporter, voiced the same theory in this 2008 book, Target Patton: The Plot to Assassinate General George S. Patton.

In Silence Patton, Orlando presents a non-lionized, realistic portrayal of a consummate yet flawed warrior, whose personal qualities often hindered him from obtaining the necessary orders to execute his desired military strategies.  The film opens with a re-enactment of the accident in which an Army truck struck the car Patton was riding in, leaving him paralyzed and near death.  The image of a dying Patton looms large throughout the film, which examines his impressive yet controversial military career and the suspicions surrounding his end.

In Silence Patton, Orlando — using his team of historians, battlefield graphics, and revealing quotes – portrays Patton overwrought by the way his immediate superiors conducted much of the war and openly bemoaning their strategic decisions.  Patton also saw through Stalin’s collaborative posturing and repeatedly warned about allying with a communist commander whom he characterized as a duplicitous, brutal leader ambitious to capture much of war-torn Europe for the Soviet Union.

The film’s context for Patton’s concerns includes revelations that before the war, Franklin D. Roosevelt’s administration was filled with Soviet spies and progressives who visited the Soviet Union and viewed communism as far less ominous than Nazism and fascism, perhaps even a “new way” ideology with a possible American future.  Further, Patton thought Roosevelt was seduced by Stalin and disturbingly trusting and attentive to the communist leader’s ideas for negotiating the war and dividing the war effort among the Allies.

In 1943, Roosevelt called for the Third Reich’s unconditional surrender, an idea supported by Stalin but considered a tactical mistake by Patton and Britain’s prime minister, Winston Churchill.  With Germany eliminated as a buffer between Russia and Western Europe, Churchill and Patton believed that realigning postwar Europe would be difficult and lead to significant Russian domination.  Patton proclaimed, “Stalin is not to be trusted.”

Silence Patton recounts the 1945 Yalta Conference, during which FDR, Churchill, and Stalin determined Europe’s new boundaries.  Roosevelt naïvely assumed that conceding to Stalin would bring his cooperation for postwar democracy and peace.  In reality, Germany would have preferred surrender to the Americans.  That’s because under Russian captivity, 75% of German prisoners survived, compared to 98% under British and American troops.

When Roosevelt died and Truman became president, the Russians continued their European westward push.  Patton sought Eisenhower’s approval to contain the Russians by advancing to eastern European capitals, but Eisenhower deferred to Stalin and ordered Patton to retreat from Berlin.  When the Russians began to loot and pillage German towns, stripping them of industrial machinery, and Stalin ordered his men to kill Germans and rape women, a horrified Patton saw his worst nightmare realized.

At war’s end, a nervous Europe welcomed its American liberators but was filled with trepidation about advancing Russians.  American troops could have driven past Prague deep into Eastern Europe, but Eisenhower, after consulting with the Russians, dismissed Patton’s and Churchill’s opinions and ordered the general to stand down.  The Russians entered Prague.  Although the Czechs requested aid from the British and Americans, eagerly anticipated their arrival, and even appealed directly to Patton, they were told that the Allies had stopped their advance at the Red Army’s request.  Appeals for help should be directed to the Russians, they were told.  Patton complained to Churchill, “Russia is the real problem.  I can’t get the Americans to see it.”

Both were frustrated that the Red Army killed people who could have been saved by Anglo-American intervention.  Thus, the Cold War began as Eastern Europeans, subjugated previously by the Nazis, suffered more than four decades of totalitarian rule under the Soviets.

During his postwar position as governor of Bavaria to conduct denazification there, Patton continued warning about Stalin and communism.  He recognized that, although Nazism was horrific, not all Germans had been true Nazis, that many good people had joined the Nazi Party to survive, and that they could be helpful in postwar rebuilding.  He was certain that German soldiers could have served as allies in a fight against the Red Army.  Instead, Patton watched the Russian bombing and brutality in German cities and the ethnic cleansing of several million Germans fleeing the Red Army.

His pragmatic views about dire conditions in postwar Europe were characterized in the press as pro-Nazi, yet Patton made German citizens walk through the death camps and witness the atrocities that had taken place.  Patton planned to return to Washington as a conquering hero and expose the wartime missteps and miscalculations of American military leadership.  He was determined that the American public would know the truth and be alerted to the lurking communist threat.

But Patton’s superiors, aspiring presidential candidate Eisenhower and General Omar Bradley, chairman of the Joint Chiefs of Staff, were concerned about political fallout, viewing Patton as a threat to their careers and reputations.  Earlier, perhaps as a precaution, the politically ambitious Eisenhower had called on his men to present a united front to investigators and the American public.

In October of 1945, Patton was removed as governor of Bavaria.  In December, he was silenced for good when an oncoming army truck crushed his car.  Paralyzed with life-threatening injuries, he died 12 days later.  During his 90-minute documentary, Orlando explores this untimely, suspicious car accident that occurred just prior to Patton’s scheduled return to the U.S.  The film asks: was Patton silenced to obfuscate the war’s missteps and shield those responsible for the aftermath with Stalin in Eastern Europe?  How did a renowned and decorated four-star general die after an alleged army truck accident absent any investigation, court martial, or further action by the military?

The film concludes with the haunting possibility that Eastern Europe was unnecessarily stuck behind the Iron Curtain from 1945 to 1989.  If Patton’s words had been heeded, could the Cold War have been prevented?  Instead, his warnings were ignored, his actions constrained, and his sanity questioned while a communist dictator was free to act.  From this beginning, the Soviet Union was strengthened and anchored to spread communism in the years ahead, when it could have been stopped in Berlin as Patton had urged.  Tragically, the liberated lands of post–World War II Europe were turned over to a Russian tyrant and forced to endure an even greater and longer lasting subjugation.