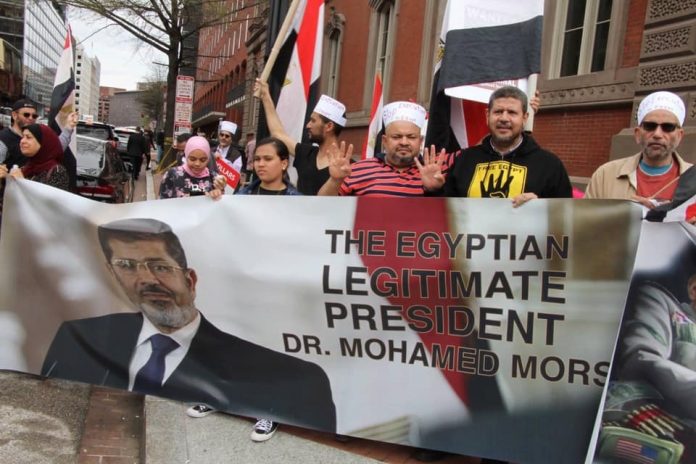 Spring has arrived in Washington D.C. And a sure sign of the changing seasons in America’s capital is the annual parade of Islamist lobbyists, who come in March and April to the heart of Western democracy to advocate, under the guise of human rights, for Islamist causes and to misrepresent the beliefs held by ordinary Muslims.

Just a week before American Islamists descended on the Capitol to push for Islamist-friendly policies during the fifth annual National Muslim Advocacy Day, their Egyptian Islamist allies did the same. On March 24 and 25, Egypt Advocacy Day took place in Washington D.C. Sponsored by Democratic Congressman Tom Malinowski, Egyptian activists and Western human rights lobbyists came together to warn policymakers against Egyptian President Abdel Fattah el-Sisi, and encourage the U.S. government to ensure Egypt works “to uphold the democratic principle of peaceful transfer of power.”

Representatives of prominent human rights organizations Human Rights Watch, Project on Middle East Democracy and Human Rights First were happy to take part in this effort, seemingly unconcerned that the organizers of this lobbying day are prominent officials of the Egyptian Muslim Brotherhood movement, which was removed from power in 2013 following enormous protests against its own abuse of powers.

The main organizing body behind the advocacy day is the Freedom Initiative, a group founded by prominent Muslim Brotherhood activist Mohamed Soltan, who was imprisoned in Egypt for nearly two years on terrorism charges, until President Obama pressured the Cairo authorities to release him in 2015. While critics claim Soltan was the victim of political persecution, he has a long history of involvementwith hardline Islamist efforts in both the U.S. and Egypt – openly expressing support for the designated terror group Hamas, and leading chants praising the killing of Jews.

Other sponsors and supporters of Egypt Advocacy Day included the Egyptian Human Rights Forum, of which Soltan is among the founders. In previous years, a key Egyptian Muslim Brotherhood proxy in America, Egyptian Americans for Freedom and Justice (EAFAJ), has also been closely involved in the annual Egypt Advocacy Day. This year, its officials took part in the lobbying day, but the organization’s name and logo were nowhere to be found on official literature.

Perhaps this is a result of a series of articles and reports exposing EAFAJ’s extremism, particularly its leading officials Hani Elkadi and Ayat al-Oraby. Curiously, for example, the Project on Middle East Democracy, which sponsored this year’s Egypt Advocacy Day, notes on its own website that “A number of experts on the Muslim Brotherhood have spoken out regarding EAFAJ’s lobbying efforts and condemned al-Oraby’s views in particular. On Twitter, analyst Mokhtar Awad referred to al-Oraby as ‘a raving sectarian lunatic.’ Awad also posted a video of al-Oraby calling for an economic boycott of Christian businesses, where she states that ‘[Christians] must be made to understand that the [Islamic symbol] crescent must be on top of the cross.'”

In the days and weeks after Egypt Advocacy Day, EAFAJ held further meetings with congressional staffers and policymakers, to express support for deposed Muslim Brotherhood president Mohamed Morsi and encourage lawmakers to force the Egyptian government to release “political prisoners” – that is, jailed Muslim Brotherhood operatives. One report alleges that EAFAJ even met with Democratic Presidential candidate Elizabeth Warren.

Leading the delegation was EAFAJ president Hani Elkadi, a New Jersey-based activist who is referred to in Arabic media as a Muslim Brotherhood “leader” in America. Elkadi openly supports violent jihadist organizations in Egypt, and routinely publishes anti-Semitic and pro-Islamist rhetoric on his social media accounts. Elkadi was a particularly vocal supporter of Mohamed Kamal, the late jihadist leader behind the U.S-designated terrorist organizations Liwa Al Thawra and Hasm. Kamal was killed in an exchange of gunfire with Egyptian police in October 2016.

Along with anti-Semitic and anti-Christian activist Ayat Oraby, Elkadi was accompanied by Amr Darraj and Ahmed Shehata. Darraj is wanted by Egyptian authorities on charges of coordinating terrorist activity in Egypt from his home in Turkey.

Shehata, meanwhile, is a prominent Islamist activist in America, closely involved with Egyptian Americans for Democracy and Human Rights, another Egyptian Muslim Brotherhood proxy, as well as the international aid charity Islamic Reliefand the community organization Muslim American Society, both of which serve as the flagship institutions of the Muslim Brotherhood-influenced Islamism in America.

The April 9 visit of President Sisi to Washington evoked an angry response from Muslim Brotherhood operatives involved with all the recent lobbying efforts. At a protest outside the White House, EAFAJ, along with other supporters of the Egyptian Muslim Brotherhood, wore Muslim Brotherhood insignia and held aloft placards of Mohamed Morsi.

The Washington Post, meanwhile, gave Mohamed Soltan column inches to denounce Sisi and criticize the Trump administration for hosting him. No mention was made of Soltan’s radical Islamist affiliations, with his byline merely noting that he is “a human rights advocate and founder of the Freedom Initiative.”

Why are politicians, human rights organizations and media outlets offering their support and time to these Islamist activists, given the violence and oppression that swept through Egypt under Morsi’s rule? Admittedly, the involvement of Representative Tom Malinowski is not particularly surprising. Malinowski was a vocal critic of plans to designate the Muslim Brotherhood as a terrorist organization, and has condemned Trump’s meeting with Sisi.

But opposition to President Sisi should not mean support for a violent Islamist movement. In December 2017, the Muslim Brotherhood officially declared the United States of America an “enemy state.” Were that not enough for elected officials to stay away, Muslim Brotherhood members and splinter groups have wreaked havoc in Egypt over the past seven years, supporting attacks on Coptic churches, and involving themselves in terrorism and assassinations. The Brotherhood’s sister organization, the designated terrorist organization Hamas, needs no introduction.

For many in the Arab world, it is a bitter irony that a movement responsible for such widespread violence and hate is now paraded around the halls of the U.S. Capitol as hearty advocates for human rights, democracy and justice. Too often, naïve Western activists and policymakers offer legitimacy to the extremists, leaving ordinary Egyptians to suffer the consequences.

Hany Ghoraba is a writer for Islamist Watch, a project of the Middle East Forum.