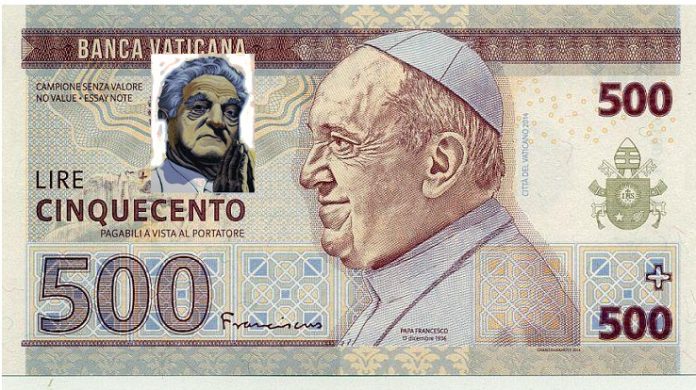 Pencil in June 30, 2019 on your church calendar. It signifies this year’s collection day for Peter’s Pence, the global collection plate for the Pope’s favorite charities. According to the USCCB website, the purpose of Peter’s Pence Collection is to provide the Holy Father with the financial means to respond to those who are suffering as a result of war, oppression, natural disaster, and disease.

Surely, the persecuted Christians in Iraq, Egypt and Nigeria desperately deserve $500,000 to help them rebuild their devastated churches, schools, homes, and lives at the brutal hands of Islamic jihadists, do they not? After all, these innocent Catholics weren’t breaking the law when the violent jihadis terrorized their land, destroyed their Churches and raped their women.

What about the underground Catholic Church in China who are experiencing a massive destructive crackdown and demolition of their churches and lives by the Communist government? They could use $500,000 from Peter’s Pence to rebuild their places of worship.

Clearly, Catholics victims of the suicide bombings on Easter Sunday in Sri Lanka by Islamic terrorists would benefit greatly with $500,000 from Peter’s Pence, would they not?

Certainly, the funds from Peter’s Pence should be directed to the Catholic Church in the Middle East and Africa, after a genocidal year of unrelenting terrorism and Christian persecution by Boko Haram and other Islamic terrorists?

No, Francis is focusing on the Soros agenda, not the persecuted Catholics’ agenda. Recall that this is the Pope who said, “If I speak of Islamic violence, I must speak of Catholic violence.”

Francis shares the Soros view that “national borders are the obstacle.” The Pope incessantly interjects his view into American politics, by commenting about Trump’s wall as “those who build walls will become prisoners of the walls they put up” or intruding into the political campaign that politicians who promote a wall are“unchristian.”

The Vatican is no friend of America, what with the disturbing news that The Vatican appropriated $500,000 of Peter’s Pence funds to aid and abet lawbreakers on our southern border.

The man who sits safely and securely behind his 39-foot Vatican wall undermines American security by funding open borders.

By pouring monies into illegal migrant caravans, Pope Francis is facilitating the soaring crime rates of human trafficking, illegal drugs, criminal organizations, and exploitation of women and children, along with the organized participation and funding of George Soros and the United Nations. Central American immigrants from the MS-13 gangs are flowing over our porous border and wreaking havoc in our communities.

It’s noteworthy that American Catholics are the largest contributors to Peter’s Pence. It is time to shut off the financial spigot to this Vatican scheme to undermine the safety, security and sovereignty of Europe and the United States. Closing wallets to the Vatican, sends a message that American Catholics want the border closed and secure. Like the Pope, Americans deserve a wall to keep us safe.

On the last Sunday in June, the second collection basket will be passed for Peter’s Pence. Close your wallet.

Elizabeth Yore is an attorney specializing in child protection advocacy. She has handled numerous clergy abuse cases. She battles on behalf of victims of female genital mutilation, child exploitation and human trafficking. She can be found at YoreChildren.com. Published inRemnant Articles