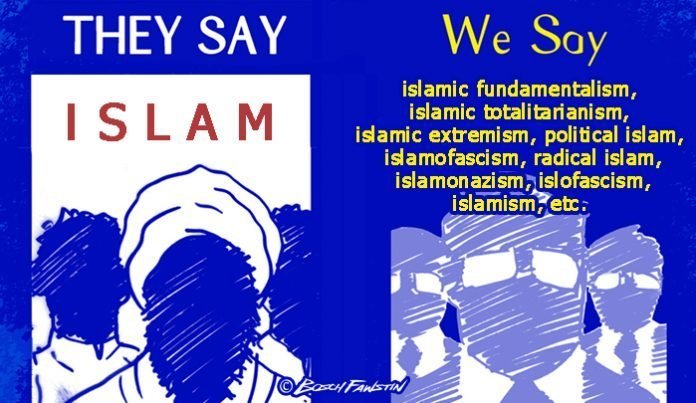 We are nearly 18 years removed from the atrocity of 9/11, and we have Yet, outside of a small minority of us, dealt with the fact that “one of the world’s great religions” is motivating a war against civilization. Also, there are far too many religionists who refuse to acknowledge that Islam is a religion, which is another issue I take on in my new book.

This needs to end. If we can’t name the enemy and his ideology, and accept that it is, indeed, a religon, we cannot defeat it. This is about telling the truth, no matter how many sacred cows it kills. This is about defending civilization, not about defending religion’s reputation. This is war. We need to be completely honest, and if we act on the truth, this enemy will be defeated not long after.

We’ve gone from naming enemy ideology -Nazism and Communism- to Renaming it-“Islamic Totalitarianism”, “Radical Islam”, “Islamism”, etc., all to the enemy’s benefit, since these misnomers imply that Islam as such is innocent of jihad. If you’re afraid to name the problem -Islam- then you can’t fight it effectively, and the enemy wants this to continue forever. The only difference between “Islamism” and Islam is three letters, but it’s those three letters that some people use in order to obfuscate the fact that the actual ideology of the Islamic enemy is Islam, and not some alleged deviant form of it. Western intellectuals and commentators refer to the enemy’s ideology as: “Islamic Fundamentalism,” “Islamic Totalitarianism,” “Islamic Extremism,” “Islamofascism,” “Political Islam,” “Militant Islam,” “Bin Ladenism,” “Islamonazism,” “Radical Islam,” “Islamism”, etc.

The enemy calls it “Islam.”

Imagine, if during past wars, we used terms such as “Radical Nazism”, “Extremist Shinto” and “Militant Communism.” The implication would be that there are “good” versions of those ideologies, which would then lead some to seek out “moderate” Nazis. Those who use terms other than Islam create the impression that it’s some variant of Islam that’s behind the enemy that we’re facing. A term such as “Militant Islam” is redundant, but our politicians continue praising Islam as if it were their own religion.

Bush told us “Islam is peace” after 2,996 Americans were murdered in its name. He maintained that illusion throughout his two terms, and never allowed our soldiers to defeat the enemy. And then came Obama, who told us, from Egypt: “I consider it part of my responsibility as President of the United States to fight against negative stereotypes of Islam wherever they appear.” If only he felt that way about America. Washington’s defense of Islam has trumped the defense of America and this dereliction of duty could well be called Islamgate.

Islam is a political religion; the idea of a separation of Mosque and State is unheard of in the Muslim world. Islam has a doctrine of warfare, Jihad, which is fought to establish Sharia Law, which is, by nature, totalitarian. Sharia Law calls for, among other things: the dehumanization of women; the flogging/stoning/killing of adulterers; and the killing of homosexuals, apostates and critics of Islam. All of this is part of orthodox Islam, not some “extremist” form of it. If jihadists were actually “perverting a great religion,” Muslims would have been able to discredit them on Islamic grounds and they would have done so by now. The reason they can’t is because jihadists are acting according to the words of Allah, the Muslim God.

From the Koran: “Slay the idolators wherever you find them.” Chapter 9, verse 5

“When you encounter the unbelievers, strike off their heads until you have made a great slaughter among them.” Chapter 47, verse 4

Beyond the doctrine, there is the historical figure of Mohammad, who, more than anyone, defines Islam. How would you judge a man who lies, cheats, steals, rapes and murders as a way of life? This evil man is Islam’s ideal man, Mohammad.Whatever Mohammad said and did is deemed moral by virtue of the fact that he said it and did it. It’s no accident that the only morality that could sanction his behavior was the one he concocted. Nor is it an accident that Muslims who model themselves after him are the most violent.

For the thirteen years that Mohammad failed to spread Islam by non-violent means, he was not so much peaceful as he was powerless. It was only through criminal activity and with the help of a large gang of followers that he managed to gain power. But he wanted his moral pretense too, so he changed Islam to reflect the fact that the only way it could survive was through force. And so, acting on Allah’s conveniently timed “revelation” that Islam can and should be spread by the sword, Mohammad led an army of Muslims across Arabia in the first jihad. From then on, violence became Islam’s way in the world. And today, acting on Mohammad’s words, “War is deceit”, Muslims use earlier “peaceful” verses from the Koran as a weapon against the ignorance and good will of their victims. Those “peaceful” passages in the Koran were abrogated by later passages calling for eternal war against those who do not submit to Islam.

How Mohammad spread Islam influenced the content of its doctrine and therefore tells us exactly what Islam means.

Note also that the only reason we’re talking about Islam is because we’ve been forced to by its jihad. And where are Islam’s “conscientious objectors”? Nowhere to be found, for even lax Muslims have been silent against jihad. But that doesn’t stop desperate Westerners from pointing to them as representives of “Moderate Islam.” Far from being a personal faith, Islam is a belligerent collectivist ideology that rejects a live-and-let-live attitude towards non-Muslims. And while the jihadists may not represent all Muslims, they do represent Islam.

In the end, most Muslims have proven themselves to be mere sheep to their jihadist wolves, and irrelevant as allies in this war. Former Muslims call the enemy’s ideology Islam, and they dismiss the idea of “Moderate Islam” as they would the idea of “Moderate Evil.” When, based on his actions, Mohammad would be described today as a “Muslim Extremist,” then non-violent Muslims should condemn their prophet and their religion, not those who point it out.

Islam is the enemy’s ideology and evading that fact only helps its agents get away with more murder than they would otherwise. Western politicians and most of our intellectuals have sold us out, so it’s up to the rest of us to defend our way of life by understanding Islam and telling the truth about it in whatever way we can. If we can’t even call Islam by its name, how the hell are we going to defend ourselves against its true believers? I call the enemy what they are, jihadists and stealth jihadists, and the “War on Terror” should be called The War on Jihad.

But behind it all, it’s Islam that makes the enemy tick.

We need to acknowledge Islam’s place in the threat we face and say so without equivocation. Not saying “Islam” helps Islam and hurts us. So we should always call the enemy’s ideology by its actual name.

We need to call Islam Islam.

Bosch Fawstin is an Eisner Award-nominated cartoonist currently adapting a novel into a graphic novel, to be announced soon He’s the winner of the Mohammad Cartoon Contest, which ended with a jihadist attack where only the would-be murderers died. He’s the creator of the anti-jihad superhero, Pigman, featured in The Infidel series. Bosch’s first graphic novel is Table for One. He is also the author of ProPiganda: Drawing the Line Against Jihad, a print companion to The Infidel.