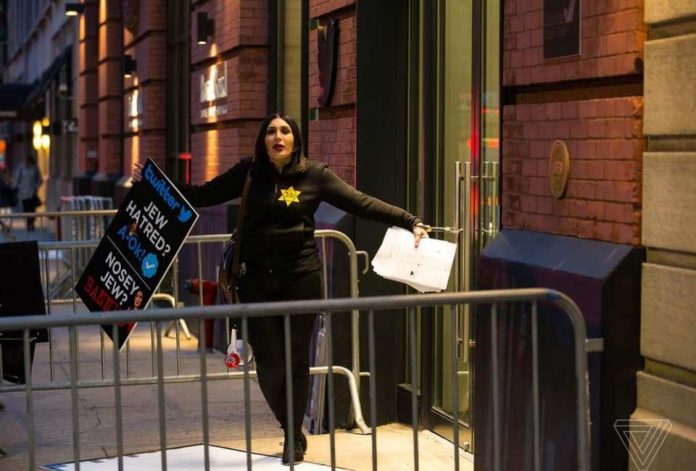 Today we remember those who were killed during the Holocaust.

Israel began commemorations of Holocaust Remembrance Day on Wednesday evening with a ceremony to remember the six million Jews who were killed during the Holocaust.

When we look back on the Holocaust, we must remember that it didn’t begin with death camps. It began by list making, boycotts, and the marginalization and dehumanization of Jewish people in society.

The Holocaust began with social and institutional acceptance of unchecked bigotry that was driven by both the state and the media, which served as the distributor for genocidal propaganda that the masses consumed.

The Holocaust is one of the worst atrocities in human history. And still today, many look back and wonder how something so evil could happen.

The answer is silence.

In the face of evil, many chose to look away and make excuses. People who otherwise could have voiced opposition to genocide chose to remain silent instead of speaking out.

The left will continue to send Conservatives to digital gulags until they can once again put us in a real gulag. In a way, one could argue that conservatives are the new Jews, and they are experiencing a digital Shoah.

In fact, I warned about this in September during the Congressional hearings regarding social media when Jack Dorsey and Mark Zuckerberg testified in front of Congress. I confronted Dorsey on September 5, 2018 during the Twitter hearing regarding social media censorship when he lied to Congress and said Twitter doesn’t censor Conservatives. I made a personal plea to President Trump, and warned him that big tech would continue to censor and ban all of his supporters in an attempt to influence the midterm and Presidential elections.

As Americans, and as members of the global human race, we made a promise when we said Never Again.

But today, I’m not sure that Never Again really means anything. Today we see increased levels of Jew hatred. We have Jew haters in Congress who have ties to HAMAS and openly demonize Jews, and we have a Democrat Party that normalizes this vile anti-Semitism under the guise of “diversity” and “criticism of Israel”.

Today we have boycotts on Jews that are growing more common with the mainstream effort to normalize the pro-terror BDS movement. Social media companies are banning Jews and Conservatives like myself while they allow for Louis Farrakhan and designated Islamic terrorist organizations like HAMAS and the Muslim Brotherhood to incite hatred against Jews.

Companies like Facebook and Twitter claim to be against hate speech, and have banned Jews like myself and Yair Netanyahu, the son of Israel’s Prime Minister Benjamin Netanyahu, for posting facts about Jew hatred and terrorism, but it doesn’t take much to see these companies just purely hate Jews.

The Holocaust happened only 74 years ago. It could easily happen again… especially if the Jews don’t wake up and stop voting Democrat. The Jews must make a choice. Will they stay silent? Or will they speak up?

To put things into perspective, there’s only 15 million Jews left on the planet.

Despite the fact that Jewish people are the true minority, their rights have been over shaddowed and hijacked by those on the Left who spew the false narrative that Muslims are the minority.

You do the math. The numbers aren’t good.

I was permanently banned from Twitter for life on November 21, 2018, and then I was banned for 30 days from Facebook less than 24 hours later.

What was my offense?

Did I spew hateful, violent rhetoric towards anyone as we frequently see leftist celebrities and politicians do online?

Did I post racist comments or call for genocide against a group of people?

Did I incite a riot or call for the President to be assassinated, like Leftists often do on Twitter?

I merely shared a fact. Yes, the truth can now get you banned for life from the Internet, in America, the land of the free, and the only country with a First Amendment right.

The tweet that Twitter decided to ban me for was a tweet full of facts about Sharia law. It was a tweet directed at Ilhan Omar, a newly elected Congresswoman, a politician, a public figure, which pointed out that her support of Sharia law does not make her an ally for gay people, women, or Jews, as Twitter would like you to believe.

This is the tweet that earned me a lifetime ban. Is this “hateful conduct,” as Twitter accused me of practicing?

As a journalist, I always ask questions and seek the truth. As an American, I have been granted free speech protections under the First Amendment to express myself as a citizen; and member of the press.

In response to my Twitter ban and Silicon Valley Sharia, I handcuffed myself to Twitter HQ in NYC on November 29, 2018. While handcuffed, I wore a yellow Juden star, identical to those worn by Jews in the time leading up to the Holocaust. Just like the Nazis made lists of political dissidents who they marked and banned with yellow stars, Twitter, Facebook, and Google are modern day techno-fascists in the way they are silencing Conservatives, Jews, and Christians who dare speak truth about radical Islam and terrorism.

During my protest, while I held a sign that read “Jew hatred, A-Ok! Nosey Jew? BANNED” at Twitter, I said,

Less than 24 hours after I was banned by Twitter, I was banned by Facebook for 30 days. Not only did Facebook not give me a reason for my 30 day ban, but they clearly coordinated the ban with Twitter in an act of big tech collusion to silence me, a Conservative Jewish journalist.

How is it that a Jewish Conservative journalist and the Israeli Prime Minister’s son get banned on social media for posting facts about Islam, but Hamas, Hezbollah, the Muslim Brotherhood, Louis Farrakhan, and Iranian dictators who chant “death to Israel” and “death to America” all have verified Facebook and Twitter accounts?

Through their pro-Sharia terms of service, Facebook and Twitter are clearly signaling that it’s ok to be a terrorist, but not ok to be a Conservative, or a Jew.

In July 2018, Mark Zuckerberg sparked outrage when he said he didn’t see a reason to ban Holocaust deniers on Facebook. Meanwhile, he finds it very necessary to ban Conservatives and Jews.

In October 2018, Twitter released a statement saying it was not a violation of their terms of service when Louis Farrakhan, the leader of the Nation of Islam, called Jews termites. Twitter said they would not ban Farrakhan, even though he has called for Jews to be eradicated and publicly proclaimed “Hitler was a great man”.

In November 2018, Twitter was forced to apologize after they allowed for #KillAllJews to trend for several hours.

In November 2018, Airbnb withdrew listings of Israeli homes in Judea and Samaria, in an attempt to side with the Palestinians and BDS movement.

You get the point.

When I was banned on Twitter, many on the Left justified my ban by calling me a “Nazi” and a “white supremacist”, despite the fact that I am a Zionist Jew. These are the same justifications given when I am further banned. As of date, I have been banned by Twitter, Uber, Uber Eats, Lyft, Venmo, GoFundMe, PayPal, Medium, TeeSpring, and in February, Chase bank temporarily shut down my access to my online banking and canceled my debit card.

Many tell me I should just “get over” the fact that I am banned from Twitter. Many more have mocked me for taking what they call “extreme measures” to get my Twitter account back. But, being banned from Twitter isn’t even the half of it. Since being de-platformed and financially blacklisted, I have lost 90% of my income and have been completely defamed.

I am a fierce advocate for Israel and the Jewish people, and yet when I go outside, people know me as “that Nazi bitch banned on Twitter”.

Last night I continued my protest and went to Jack Dorsey’s house in San Francisco where I used a projector and projected the names of every prominent conservative and one liberal banned from Twitter onto a wall at his $10 Million house. Jack Dorsey told members of the US Congress that Twitter is a public square, and he told Joe Rogan that social media is a human right. Thus, by banning me and many other conservatives, Jack Dorsey is preventing me from existing and communicating in the digital public square, and he is committing human rights violations against Conservatives.

I ended my protest at Jack Dorsey’s house at midnight, marking Holocaust Remembrance Day on May 1, 2019. Jack Dorsey’s neighbors didn’t like the sound of the loud projector. And Jack Dorsey himself didn’t enjoy the protest, because before midnight struck, the account and livestream on which my protest was being streamed were both banned. With the click of a button, the world was cut off from my #StopTheBias protest in which I was fighting for an end to censorship and social media bias of conservatives.

And at midnight, with the turn of a switch on a projector and generator, once again, there was darkness and silence.

Last week I filed a lawsuit in a Florida court for harm caused bymy November 2018 ban from the social media platform Twitter.
As reported in the Wall Street Journal, my ban came at the instigation of CAIR (Council on American Islamic Relations) and was carried out shortly after CAIR’s meeting with Twitter executives.

Those who wish to support Ms. Loomer’s legal defense fund and sign her petition can do so at FreeLoomer.com F

Laura Loomer is a conservative investigative journalist and activist. Originally from Arizona, Laura began her career working as an undercover journalist for Project Veritas from 2015-2017. She covers politics, anti-Semitism, immigration, terrorism, the Islamification of the West, and voter fraud. Loomer’s investigations have been broadcasted on every major national mainstream media outlet in the United States, as well as many international publications.