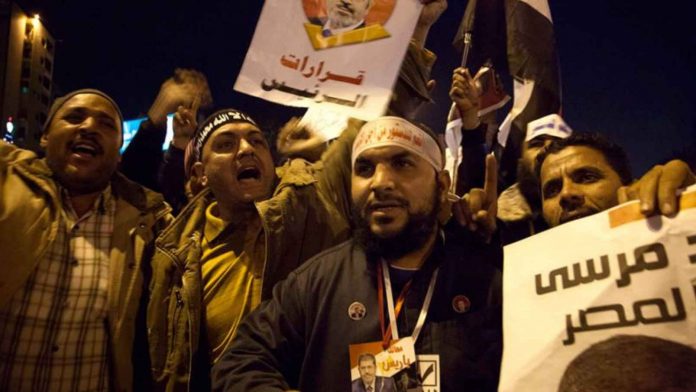 Finally, a U.S. president who understands the threat.

The Trump administration is considering officially designating the Islamist group known as the Muslim Brotherhood as a Foreign Terrorist Organization, a policy unimaginable during the terrorist-friendly Obama administration which championed the group as an ally.

“The president has consulted with his national security team and leaders in the region who share his concern, and this designation is working its way through the internal process,” White House Press Secretary Sarah Huckabee Sanders said in a statement April 30.

“This unprecedented step, led by the Department of State, recognizes the reality that Iran is not only a State Sponsor of Terrorism, but that the IRGC actively participates in, finances, and promotes terrorism as a tool of statecraft,” Trump said in a statement. This designation, which took effect April 15, was “the first time that the United States has ever named a part of another government as a FTO.”

As Joseph Klein previously wrote at FrontPage, the mullahs’ regime “lives and breathes Islamic extremism, which it seeks to export through its global jihad terrorist network,” adding that the “IRGC sits at the center of that terrorist network,” providing “funding, equipment, training, and logistical support to terrorist proxy groups, including most notably Hezbollah in Lebanon and Syria.” The IRGC has also participated in attacks on Americans.

The UAE designated the Council on American-Islamic Relations (CAIR), a Brotherhood affiliate in the U.S. that poses as a Muslim civil rights group, a terrorist organization in 2014. In the U.S., CAIR was named an unindicted co-conspirator in 2007 in an alleged criminal conspiracy to support both HAMAS and the Holy Land Foundation for Relief and Development.

Egyptian President Abdel Fattah al-Sisi reportedly asked President Trump April 9 for the designation during a private consultation. Sisi overthrew the Muslim Brotherhood-backed president, Mohamed Morsi, in 2013, and then won election in his own right the year after. Since then he has cracked down on Muslim militants.

National Security Advisor John Bolton and Secretary of State Mike Pompeo reportedly favor the designation, but officials at the Pentagon and elsewhere in the administration have been dragging their heels.

The Obama administration was infested with Muslim Brotherhood backers.

For example, Hillary Clinton’s ties to the Brotherhood are well-documented.

The policies she carried out as President Barack Hussein Obama’s secretary of state from January 2009 to February 2013 caused the so-called Arab Spring, a period of civil unrest, wars, and revolutions in the Arab world that began in late 2010 and was followed by the Arab Winter, a backlash that made Islamism and authoritarianism ascendant in the region. She helped the Muslim Brotherhood overthrow longtime U.S. ally Hosni Mubarak in 2012 to clear the way for their candidate, Mohamed Morsi, to assume the Egyptian presidency.

One apparent beneficiary of that policy was Gehad el-Haddad, a Muslim Brotherhood operative who worked at the Clinton Foundation in Egypt for five years. After the regime he was part of was ousted, the Islamic terrorist leader received a life sentence in Egypt for sedition.

Both the Clinton Foundation and the Obama administration worked closely with the Muslim Brotherhood, Clare Lopez, vice president for research and analysis at the Center for Security Policy said last year.

“It was U.S. policy at that time to support the Muslim Brotherhood both domestically and abroad. The Obama administration was riddled with such influences,” Lopez said.

In 2010, the Obama administration spelled out its policy of support for the Muslim Brotherhood in a still-classified document titled “Presidential Study Directive-11,” or PSD-11. The objective of the policy, according to leaked reports, was to help the Muslim Brotherhood come to power in Tunisia, Libya, Syria, and Egypt. In a March 6, 2011, Washington Post column, David Ignatius wrote, “This is the president as global community organizer—a man who believes that change is inevitable and desirable, and that the United States must align itself with the new forces shaping the world.”

In November 2018 the Center for Security Policy urged President Trump to declassify PSD-11.

The odds of the government declassifying that memo that is potentially devastating to Obama and friends just improved.

Ilhan Omar Flashes Back to Reading Islamic Prayer in a Catholic Church: Allah, ‘Sustain Me with Your Power’