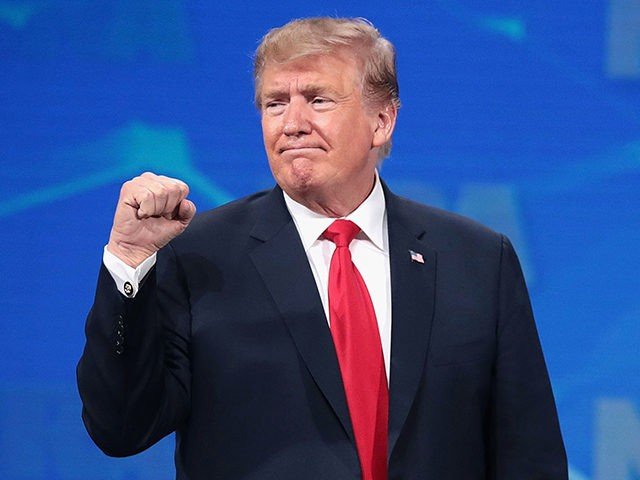 “Once again, Israel faces a barrage of deadly rocket attacks by terrorist groups Hamas and Islamic Jihad,” Trump tweeted. “We support Israel 100% in its defense of its citizens.”

More than 650 rockets were fired into Israel since Friday, killing four Israelis and injuring 80.

Trump also advised Palestinians to work towards peace and not terror.

“To the Gazan people — these terrorist acts against Israel will bring you nothing but more misery,” the president said. “END the violence and work towards peace — it can happen!”

The latest flareup comes ahead of the the long-anticipated unveiling of Trump’s peace plan.

Israel responded with a massive bombardment of terror targets in Gaza, including a cross-border underground tunnel, a subterranean rocket factory, a six-story building used by Hamas intelligence, as well as the private homes of dozens of terror commanders — some of which were being used as weapons caches, the army said.

Israel also killed a Hamas commander said to be the Strip’s main liaison with Iran in what was the first targeted killing since 2014’s Operation Protective Edge, the military stated.

The death toll in Gaza reached 31, according to numbers by the Gaza health ministry, with many being claimed as operatives of Hamas or the Iranian-backed Palestinian Islamic Jihad. At least 11 were confirmed terrorists.

A Palestinian woman and her baby were also killed in a botched missile launch by the terror groups.

Vice President Mike Pence decried the attacks and defended Israel’s right to protect itself. “We strongly condemn the attacks in Gaza by Hamas terrorists,” he tweeted. “Israel has the absolute right to defend itself & the U.S. stands by our great ally Israel.”

Freshmen Democratic congresswomen Ilhan Omar and Rashida Tlaib both blamed Israel and the “occupation” for the violence.

“How many more protesters must be shot, rockets must be fired, and little kids must be killed until the endless cycle of violence ends? The status quo of occupation and humanitarian crisis in Gaza is unsustainable,” she tweeted. “Only real justice can bring about security and lasting peace.”

“When will the world stop dehumanizing our Palestinian people who just want to be free? Headlines like this & framing it in this way just feeds into the continued lack of responsibility on Israel who unjustly oppress & target Palestinian children and families,” she wrote.

One tweeter user remarked, “Are you an elected official in the United States or Palestine?”

Israel evacuated from Gaza in 2005, evicting 12,000 Jews from their homes and withdrawing its troops.

Hamas’ takeover in 2007 was followed almost immediately by a reign of rocket fire. [emphasis added]