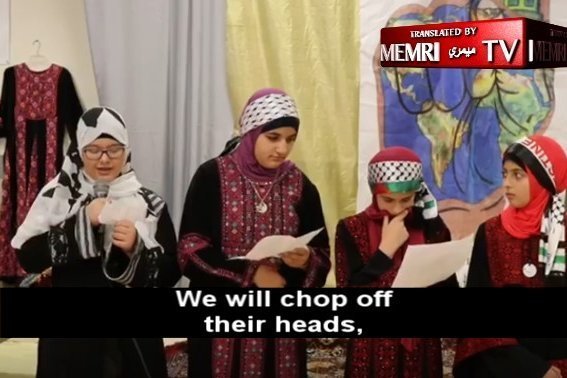 At the Muslim American Society  (MAS) Islamic Center in Philadelphia this past April, young children sang songs in praise of torture and murder, pledging that they would “chop off the heads” of the Jews in Israel, and subject them “to eternal torture.”
The children were videotaped by  adults belonging to the MAS, who then proudly posted the Arabic-language video on the MAS Facebook page. Unfortunately for the Muslim American Society, that video was seen by members of MEMRI (the Middle East Media Research Institute).who translated the Arabic, and posted the video, with English-language subtitles, and a transcript, at their own site.  This caused an immediate furor, with expressions of horror at the homicidal hate the children had been taught to express.
Here’s the story:

“A national Muslim group says it will conduct an investigation into an event at a Philadelphia Islamic center last month during which a group of youngsters sang songs it said were not “properly vetted,” calling that “an unintended mistake and an oversight.”
“Youngsters at the Muslim American Society Islamic Center in North Philadelphia are shown in video footage speaking in Arabic during a celebration of “Ummah Day,” said the Middle East Media Research Institute (MEMRI), a Middle East monitoring organization. One girl says “we will chop off their heads” to “liberate the sorrowful and exalted Al-Aqsa Mosque” in Jerusalem, according to MEMRI.

While we celebrate the coming together of different cultures and languages, not all songs were properly vetted,” the Muslim American Society, based in Washington, said in a statement issued on May 3. “This was an unintended mistake and an oversight in which the center and the students are remorseful. MAS will conduct an internal investigation to ensure this does not occur again.”
“Representatives of MAS did not respond to requests for additional comment on May 4.  The nonprofit has more than 50 chapters throughout the United States, according to its website.
“As a faith-based organization dedicated to moving people to strive for God-consciousness and a just and virtuous society, we affirm our long-standing position on our shared values of humanity. We stand resolutely in our condemnation of hate, bigotry, Islamophobia, xenophobia, racism, anti-Semitism and all the illnesses of hate that plague our society,” MAS said in its statement.
“According to MEMRI, one girl reads: “We will defend the land of divine guidance with our bodies, and we will sacrifice our souls without hesitation. We will lead the army of Allah fulfilling his promise, and we will subject them to eternal torture.”
“In other videos, students sing songs about the “blood of martyrs” and “Rebels, rebels, rebels.”
“The videos were posted on the center’s Facebook page, the media monitoring group said, but the videos included in the MEMRI report appear to have been taken down from the center’s page.
“The Anti-Defamation League in Philadelphia called the incident “extremely disturbing.”
“Children should not be indoctrinated to hate. These young people should never have been asked to make speeches and dance and lip-sync to songs that glorify violence against Jews and the State of Israel. The conflict between Israelis and Palestinians is deeply complex and painful on all sides, and the only chance for a peaceful future is to teach our children to pursue peace,” the statement read.

This event happened in April. But the Muslim American Society (MAS) expressed its supposed regret only weeks later, after a video of it (with the Arabic translated into English), appeared on the site of MEMRI, where it attracted much unfavorable attention.
Until then, not a single Muslim adult who was present during the children’s horrific expression of murderous hate apparently objected to it.  And why would they? Adults were the ones who had to have taught the children what to say, and what to sing, to have supplied them with their scripts, and rehearsed with them what they had memorized, Someone decided that the video was so inspiring that it ought to be put up at the Facebook page of the Philadelphia chapter of the Muslim American Society, and it was. Many Muslims must have seen it there; none of them objected to the video or called for it to be taken down. Only after MEMRI had posted the video at its own site, with what the children said translated into English, was that video removed from the MAS Facebook page.

MAS then claimed that it had all been an “unintended mistake,” a failure of “vetting,” and that the whole matter would be investigated. This is nonsense, of course, for no one was simply making a “mistake” in composing such lines for children to memorize and recite, rehearsing with them, listening proudly as they pledged to torture and kill Jews in Israel, videotaping the performance, and then posting it at the Facebook page of the Philadelphia chapter of the Muslim American Society. No MAS member thought there was anything wrong with this performance. They were proud of their would-be Jihadis. But they had not counted on MEMRI, which found the video at the Facebook page of MAS Philly, translated the Arabic, and made that video, with the transcript, available to the world.

At MAS they must have been thinking: “How dare those Infidels listen in on what our little children happen to babble about!  Have those Jews no respect for privacy? Do we post what they whisper to each other in their synagogues?” But here’s what they said:   “We stand resolutely in our condemnation of hate, bigotry, Islamophobia, xenophobia, racism, anti-Semitism and all the illnesses of hate that plague our society.”
Of course.  Nothing says “we stand resolutely in condemnation of antisemitism” like promising to “chop of the heads” of Jews.
It was all an “oversight.” A case of insufficient vetting. “We at MAS Philly will get to the bottom of this. A few months ago a visiting imam, Abdelmohsen Abouhatab, made remarks at the Al Aqsa Islamic Society, that some people considered antisemitic. And our mosque officials, who had no idea what this imam had been preaching, quickly apologized, expressing surprise that an imam could have uttered such insensitive remarks. It’s no different with this disturbing video. As soon as it came to our attention, we expressed our deepest regrets. We at MAS Philly solemnly pledge: we will get to the bottom of this.”
Mendacious words to that effect.
“War is deceit.” said Muhammad, so here’s another possible line of inquiry for the MAS Philly to throw out there:
“Perhaps the children were misled by someone intending to show Muslims in a bad light. Who, after all, benefits from publicizing that performance? We took the video down from our Facebook page just as soon as we were alerted that someone had posted it;  truth to tell, none of us had even noticed it. Lots of stuff gets posted at our site by all kinds of people; we don’t pay much attention.. We’re still trying to figure out how that video was made.Some people say it must have been Zionists. Without wanting to rush to judgement, we can’t help but notice that the people who run MEMRI are Israelis, so we will of course be looking into that angle as well. Could there have been a setup all along, in which little Muslim children were merely the useful pawns of those trying to smear the image of Islam? It’s hard to know exactly what’s going on. But I can give you my word: we will follow every lead.”
“Meanwhile, we want to join our Jewish brothers and sisters in expressing dismay at this video and our  “oversight” in letting it appear. We will make every effort to ensure that such oversights do not happen again.”
That may satisfy the terminally naive, but it should fool no one else. The Phlladelphia chapter of  the Muslim American Society was caught in flagrante delicto, and now its members realize that they must be careful what videos they put on-line. MEMRI is watching. MEMRI can translate from Arabic and Farsi. MEMRI can post videos on-line. The Muslim Society of America is prepared to deceive, but it wasn’t prepared for that.