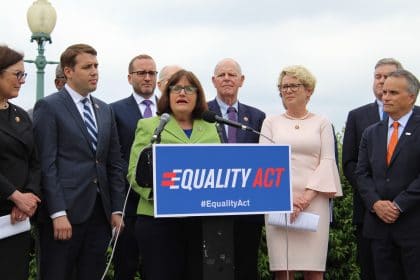 WASHINGTON — Eight Republicans in the House of Representatives sided with Democrats in a vote Friday on sweeping pro-LGBTQ legislation.

House Speaker Nancy Pelosi said it’s no longer enough for Americans to be “tolerant” of LGBTQs. We must celebrate and take “pride” in this community’s sexual decisions.

Conservative groups lobbied against the bill, which will face stiffer resistance in the Republican-controlled Senate. American Principles Project spelled out the reasons for its opposition to H.R. 5 here. Its executive director, Terry Schilling, released the following statement Friday:

“Let’s call this bill what it is — the ‘Inequality Act’ — one of the most hateful bills to ever pass the House of Representatives. This is a direct attack on the rights of hundreds of millions of Americans. Parents, women, people of faith — almost every American stands to lose if H.R. 5 becomes law.

“Today House Democrats voted to eliminate women as a protected class under the Civil Rights Act. They voted to effectively end Title IX. They voted to abolish conscience rights. They voted to end religious freedom as we know it. They voted to strip parents of their fundamental right to direct the upbringing of their children. This is wrongheaded policy on every level.

“In addition, the eight Republicans who joined the Democrats today in supporting this bill have especially betrayed the people they were elected to represent. They should now expect electoral consequences.”

Earlier this week, Schilling wrote in Human Events that Friday’s vote would present a choice for Republicans between following the bold leadership of President Trump or bowing to the demands of an increasingly leftist corporate class.

Three of the eight GOP Congressmen — Hurd, Fitzpatrick and Katko — represent competitive districts, according to the Cook Political Report. The others are in relatively safe seats.

The United Kingdom passed similar legislation in 2010, revolutionizing its schools.

If a bill like this ever becomes law, and it surely will if the Democrats win the White House and gain seats in the Senate next year, the U.S. will go headlong into a brave new world marked by newly created “rights” for certain protected classes at the expense of religious-freedom rights of Christians.

Matt Staver, founder and chairman of Liberty Counsel, also fought hard against the Equality Act. He said it would eliminate the Religious Freedom Restoration Act of 1993 (RFRA) as a claim or defense to the application of many federal laws.

This bill drastically alters religious freedom in all cases, not just those involving LGBT, Staver points out. It elevates LGBT to the same level as race, and federalizes abortion and abortion funding. The bill now goes to the Senate as S. 788.

Consequences would be ‘staggering’

The Act also expands the definition of public accommodations to include places or establishments that provide (1) exhibitions, recreation, exercise, amusement, gatherings, or displays; (2) goods, services, or programs; and (3) transportation services.”

“No one who voted for the misnamed ‘Equality Act’ deserves to serve in Congress,” said Staver. “This bill destroys the fundamental religious freedom on which America was founded. This bill is unpatriotic and dangerous. The misnamed ‘Equality Act’ has nothing to do with equality and is the most serious threat to life and liberty ever proposed by Congress. This bill needs to be stopped in the Senate. If this bill becomes law, the consequences are staggering.”

Democrats, along with their pals in the mainstream media, parlayed the bill’s passage as a “historic” breakthrough for freedom and equality. See Sen. Michael Bennet’s, D-Colorado, tweet below.

Pete Buttigieg, the openly homosexual mayor of Fort Wayne, Indiana, and a candidate for president in 2020, also tweeted his elation with Friday’s House vote and urged his followers to call their U.S. senators to pressure them to also vote for the bill.

Leo Hohmann is an independent freelance journalist, author of the 2017 book “Stealth Invasion: Muslim Conquest through Immigration and Resettlement Jihad.” He is working on a follow-up that will investigate the Interfaith movement, which is ushering false and antichrist ideas into Western churches. To support his research and writing projects, please consider a donation of any size.