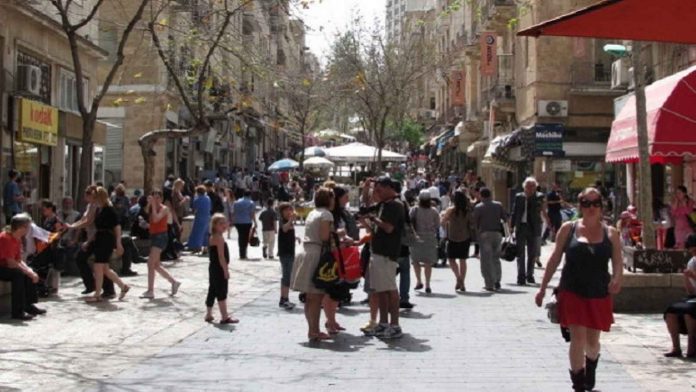 The virulently anti-Israel movement known as Boycott, Divestment, and Sanctions—BDS—is roiling through campuses, overflowing into city councils, encroaching into corporate boardrooms, and now chomping at the essence of Israel’s special niche in the world: its travel and tourism industry. Everywhere, the boycotters have been asking to isolate Israel. BDS even convinced Airbnb to stop listing Jewish locations in Judea and Samaria—also known as the West Bank (a term invented after Jordan invaded in 1948, when the UN’s partition suggestion failed to create two states). In Ireland, a bill advancing through Parliament may criminalize visiting the old city and even purchasing lunch or a keepsake.

Whereas similar boycotts against other countries have inflicted withering effects on national economies, in Israel—it simply hasn’t worked. The opposite is true. Yes, boycotters are busy demonizing Israel. Yet despite this, Israel’s tourism industry has rocketed to a singular triumph and now employs tens of thousands. Flights are packed and new non-stops are being added across the globe. Even though new luxury hotels are going up as fast as the Mideast sun will dry concrete, rooms remain in high demand and, thus, are scarce and expensive. Israel has become world famous for creative cuisine and trendy eateries; so if you want to get a table at the most popular restaurants, you’ll need to book weeks in advance.

Travel and tourism to Israel has dramatically changed. It’s not just synagogue sisterhoods and Jewish organizations. Swelling up from Israel’s “Start-up Nation,” world famous top chef culture, and hard-won penetration of markets beyond America and West Europe, as well as its sophisticated travel industry burnishing, Israel is now a destination for the entire world. Traditional Jewish-American travelers from Miami to Seattle must now compete with Silicon Valley techies, Chinese students, Indian tourists, East European Christian pilgrims, and diverse businessmen from across the planet. The numbers are multiplying.

In 2016, 2.9 million total worldwide visitors visited Israel. By the close of 2018, that number had boomed to 4.1 million—and the totals keep climbing. Within the coming decade, Israel expects to employ 98,000 people in its tourism sector.

Arrivals stream in from everywhere.

Today, most North American travelers to Israel are not Jewish; they are Christian, often seeking Biblical discovery. From North America, Jews comprise about 40 to 45 percent of the travelers, while Christians generally hover at about 60 percent year to year, according to official estimates. While the Jewish-Christian percentages remain the same, the growth spurt for North America has seen the overall numbers increase by 42 percent since 2016.

In 2015, only 30,000 tourists visited Israel from China. But when direct flights between Ben Gurion airport and numerous Chinese cities were added, the number more than trebled to 100,000-plus annually. Today, China is Israel’s greatest growth market. Celebrity Chinese chefs are now flown in, and Chinese-speaking guides are easily found.

North American carriers all compete with El Al, which is by far the dominant carrier linking our continent with Israel—boasting 45 nonstop flights weekly that carry more than 50,000 passengers per month. For many Israel-bound travelers, El Al is the one and only carrier. And it has vastly improved. With the exception of the Jewish sabbath and holidays, Israel’s star-emblazoned national carrier flies day or night, rain or shine, good news or bad news, rockets or not. Its unique extra security, where young security staffers at the airport ask invasive personal questions to evaluate risk, are sometimes viewed as a mix between reassurance, ritual, and a Jewish guilt trip. “You’re coming to Israel? Why now?” Or the classic: “Who do you know in Israel?” Answer: “Everyone.”

El Al has conquered labor problems, on-board religious tiffs, and more to expand and enhance its daily service to and from multiple U.S. cities. Not only can you fly El Al nonstop direct from New York, Newark, and Miami, but now also from Boston, Los Angeles, Toronto, and this summer, from Las Vegas and San Francisco. In spring 2020, Chicago service starts. Most of all, El Al predominantly offers Dreamliner service. On its 747 and 777 fleet, El Al still offers Economy Seat PLUS, relatively affordable, spacious, and comfortable—especially in the bulkhead row. For many traveling to Israel, El Al’s Economy Seat PLUS is now the go-to booking. What’s more, you can purchase business class check-in at either JFK or Newark for $35–$45, and your travel experience will be delightful. The lounge is restful and stocked with good food and beverages, allowing you await departure in luxury.

Israel’s tourism triumph would not have been possible without an airline triumph as well. That triumph in the skies has finally happened.