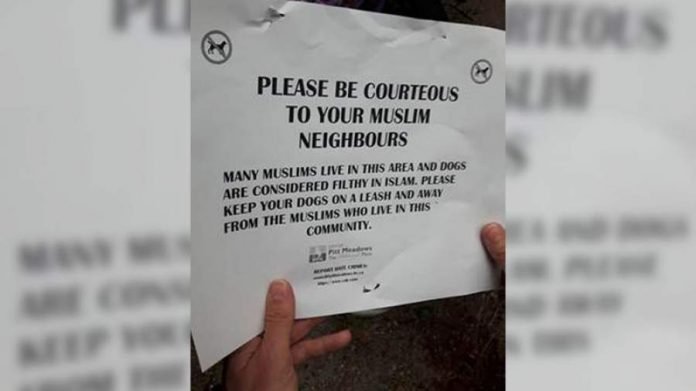 Immigration in Europe and America is becoming colonization.

A number of flyers were recently posted in Hoffman Park asking dog owners to keep their pets leashed.

“Many Muslims live in this area and dogs are considered filthy in Islam. Please keep your dogs on a leash and away from the Muslims who live in this community,” the flyers read.

It’s not clear who posted the signs in the community, but several were brought to city hall by area residents because they include the city logo and the email address for city council.

Mayor John Becker says the notices were not produced by the city, and he does not endorse them.

“Whether they were produced by a well-meaning member of the Muslim community or by someone wanting to cause contention, the fact remains that there are current bylaws in place that enforce areas for dogs to be on leash, except in designated off-leash areas,” Becker said in a statement sent to CTV Vancouver.

Nor is Canada some weird, hyper-polite anomaly. Muslim politicians in the Netherlands have tried to ban dogsfrom The Hague. In Spain, local politicians rejected such a ban. An epidemic of dog-poisonings happened shortly after. As the Gatestone Institute reports:

In Britain, which has become “ground zero” for Europe’s canine controversies, blind passengers are being ordered off buses or refused taxi rides because Muslim drivers or passengers object to their “unclean” guide dogs.

Talk about a “sign of the times.” That sign in the Canadian dog park tells us much that we’d rather not think about. That kind of sign notifies you when your country has been colonized.

Muslim politicians in The Netherlands have tried to ban dogs from the nation’s capital. In Spain, when local politicians rejected such a ban, a wave of dog-poisonings happened shortly after. In Britain, handicapped people with guide dogs get kicked off buses when Muslims complain.

The Coming Trail of Tears

Imagine how Native Americans felt when their chiefs ordered them out of some traditional hunting area. The English or Spanish now claimed it. Or when Europeans fenced in the open fields. Or cut down a forest. And natives’ chiefs warned them solemnly not to go on the warpath. They didn’t have the strength. It was too late for that, too late.

In some European cities, that’s already the case. There are “no-go” Muslim areas in cities like Paris and Brussels, where police are afraid to venture. In Britain, patriotic politician (and Islam critic) Tommy Robinson learned that the city of Oldham is now a no-go zone, too. In weeks before, left-wing protestors started dumping milkshakes over Robinson and other right-wing figures (the latest: Nigel Farage). Liberal media treated these assaults as comical, and essentially blamed the victims.

From Milkshakes to Bricks

Predictably, things escalated. As Robinson reports on his website:

There were concerns that there would be trouble when he landed in Oldham, but Tommy had specifically chosen to stay away from Muslim areas and to give his speeches in predominantly white working-class areas to avoid potential flashpoints.

In all the towns and cities he has visited on his campaign trail so far there has been very little trouble, a few milkshakes have been thrown here and there.

But in Oldham, things got ugly, with the help of local police:

The police escorted the masked up Muslim Defence League thugs to where Tommy had set up his makeshift stage and a massive screen to give his speeches. The good old boys in blue then passively allowed the baying Muslim mob to launch bricks and bottles at peaceful members of the public, including women and children, while they stood and watched. Members of the public who may not have been supporters; just people that wanted to hear what a candidate had to say – the very basis of democracy. A democracy, the political class and media seem unwilling to defend.

Here’s Robinson’s video of the event, with commentary (warning: profanity and violence):

Let’s think back to the European colonization of North America. European settlers didn’t seek to assimilate to the ways of Native Americans. Or obey their laws. Few learned Indian languages. They didn’t ask permission of native tribes — except in occasional treaties after battles, always with the aim of taking more Indian land. Of keeping the tribes from uniting and driving them out, until the Europeans had brought in enough new settlers, or reared enough children. Till they were too strong to dislodge, and the only option was to retreat. Then retreat again, in the hope that the newcomers would finally leave them in peace.

Yes, the Europeans did try to benefit from the existing Indian system. They accepted help from natives, as the Pilgrims did in Massachusetts. They traded with tribes, as English settlers did in the Carolinas. And they used Indian expertise and knowledge about the land. They also took advantage of divisions among the various tribes, allying with one to fight the other, as the Spaniards did in Mexico. But always with one aim: to expand the scope and wealth of the colonists’ communities. To make themselves stronger compared to the fragmented Indians, and further their displacement.

A few idealists aside, especially in North America, the settlers and their leaders kept their eyes on the prize. Namely a country where the only thing left of Indians would be a few exotic place names, like Connecticut and Mississippi. For their part, the natives proved far too split among themselves to take united action against the newcomers until things had gone too far. And they couldn’t match the numbers. There seemed to be an almost infinite supply of new Europeans streaming in from across the Atlantic, then through their porous borders.

The parallels with mass Muslim immigration into Europe are grimly obvious. To some degree, they apply as well to mass, illegal Latin American migration into the U.S. There are differences as well, of course, among these historical colonizations. But are they really decisive?

Or is what we’re seeing in Europe a mass colonization by cohesive, intolerant Muslims? Is the U.S. enduring a mass colonization (against its will and its laws) by people whose culture is starkly different from our tolerant Anglo-American heritage? People who (see California) vote overwhelmingly against our traditions of small government, self-reliance, and political transparency?

In Colonial times, some Indian leaders would invite in the Europeans to attack their enemies. They’d ally with these newcomers, for the sake of short-term power. And those chiefs might find themselves well-paid for their efforts, retiring with great casks of whiskey, with English guns and gold. (Likewise, no open borders Democrat politician will ever miss a meal.) But their peoples paid the price. So they would certainly tell us, if those tribes still even existed. Their monuments? All gone now, torn down and erased. You know, the way that our sell-out chiefs, drunk on foreign liquor, want to tear down every historic American monument, from the Confederates to the Founders. Kind of an eerie parallel there, isn’t it?

The time to think about questions like these is not when you’re sitting on a reservation somewhere, operating a bar on the sufferance of local Muslim leaders. Or hunkering down in one of the last few “red states” left in America, waiting for the Feds or the courts to confiscate your guns and reeducate your kids.