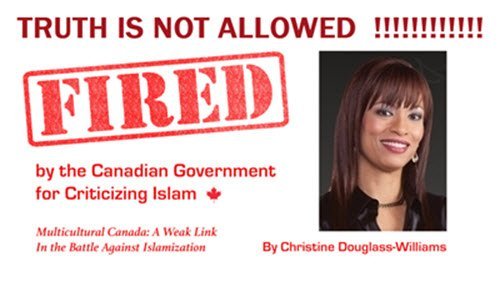 Terminated by the Trudeau government for her writings against political Islam on Jihad Watch, Christine continues telling the Truth about Islam.  She is on a mission to make Canada hear the truth, understand the threats, and make a stand against the Sharia implementation in Canada.   She should be awarded for her efforts to save Canada!  NOT Fired!  Canada, stand WITH Christine and the work she is doing to  Make Canada Great Again!

TV Jihad, How Does Merkel’s Rhetoric Play in North America?, Is Canada, Like France, a Post-National Country?, The Enemies Within the Church, Sharia Blasphemy Law Wins, Attempts to Limit Sharia Saturation, Is There Hope for North America?

Discover Jihad Watch as a go-to site for the latest news on the Sharia saturation of North America by the Muslim Brotherhood.  Also, Sharia compliant Muslims across Europe that prove without a doubt that Islam is NOT a “peaceful” religion.

Why Jihad Watch? Because non-Muslims in the West, as well as in India, China, Russia, and the world over, are facing a concerted effort by Islamic jihadists, the motives and goals of whom are largely ignored by the Western media, to destroy their societies and impose Islamic law upon them — and to commit violence to that end even while their overall goal remains out of reach. That effort goes under the general rubric of jihad.

Jihad Watch Seeks to Provoke a Continuous and Increasing Outcry Wherever and Whenever Sharia’s Institutionalized Injustices Threaten “Infidels”, especially Women.