Tens of thousands of flag-waving Israelis marched through Jerusalem on Sunday to mark the unification of the city’s eastern and western sectors in the 1967 Six Day War, with tensions heightened due to the holiday coinciding with the final days of the Muslim fasting month of Ramadan.

The so-called Flag March, with a large contingent of Jewish religious nationalists, included passing under heavy security through the Muslim Quarter of Jerusalem’s Old City in what Palestinian see as a provocation.

Some 3,000 police were deployed, said police spokesman Micky Rosenfeld.
“We came to celebrate the day,” said Rina Ben Shimol, who came with her husband and their three young children from their home in Kfar Tavor in northern Israel.

“It is Zionism and it’s to strengthen the link with our origins and with the country,” she said.

Earlier in the day, Palestinian worshipers clashed with Israeli police at the Temple Mount, also located in the Old City in East Jerusalem. 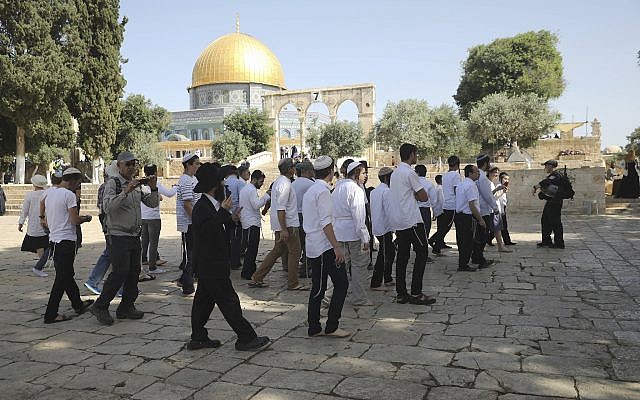 Muslim worshipers in the compound were angered over Jewish visits to the site, which is holy to both religions, in the final days of Ramadan.

According to police, protesters barricaded themselves in the Al-Aqsa Mosque at the site, from where they threw chairs and stones at forces that mobilized to dispersed them.

The Muslim Waqf trust, which oversees the site, said police used rubber bullets and pepper spray, adding that seven people were arrested and 45 were wounded. Hebrew media said there were no reports of injuries in the clashes.

The Waqf said police shut the mosque’s doors and chained them.

After the clashes, police spokesman Rosenfeld said calm had returned and visits continued.

Al-Aqsa Mosque Director Omar al-Kiswani accused Israel of violating an agreement not to allow such visits during the last days of the Muslim holiday.

He said around 1,200 Jews visited the Temple Mount on Sunday, a number corroborated by a Jewish organization that arranges visits to the site.

The status of the Temple Mount is one of the most sensitive issues in the Israeli-Palestinian conflict.

Sunday’s visit was the first time since Tuesday that Jews were allowed into the holy site, according to activists.

Jews are allowed to visit the site during set hours but not pray there to avoid provoking tensions. Jewish visits to the site, particularly by religious nationalists, usually increase for Jerusalem Day. 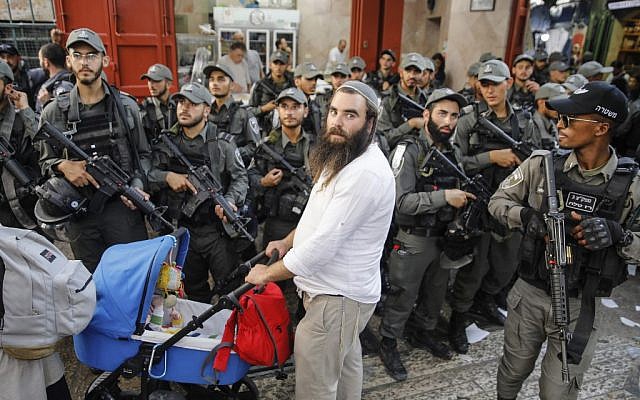 Public Security Minister Gilad Erdan said his policy was to do everything possible to keep the site open to visits, especially for Jerusalem Day.

He said preparations to avoid serious unrest included arrests ahead of Sunday based on intelligence in addition to those in connection with the clashes.

Jordan, the custodian of the holy site and one of only two Arab countries with a peace treaty with Israel, condemned what it said was Israel’s “flagrant violations” there, calling the visits “provocative intrusions by extremists.”

Such actions risked setting off violence in the region, according to a statement from Jordan’s foreign ministry.

The wall is the holiest site where Jews can legally pray.

Following its seizure in 1967, East Jerusalem was annexed by Israel in a move never recognized by the international community.

Israel proclaims the entire city its united capital, while the Palestinians see its eastern sector as the capital of their future state.