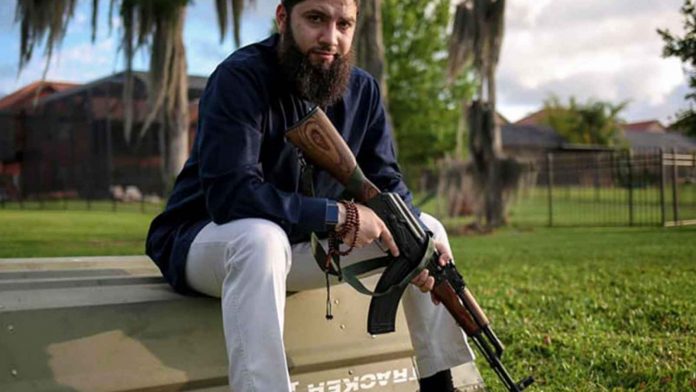 So he meets with and helps fundraise for convicted Palestinian Islamic Jihad member.

CAIR Representative Hassan Shibly is not happy that his and his radical Muslim brethren’s names are found on the United States government terrorist watch list, so he and his organization are suing the federal government to get rid of the list. However, there is a good reason that the list exists and many good reasons for Shibly to be on it, and he just made that case even stronger by meeting with and helping to fundraise for convicted Palestinian Islamic Jihad member, Hatem Fariz.

The terrorist watch list or Terrorist Screening Database was established by the US to protect Americans from potential dangers. According to the FBI, the agency that maintains the list, the list includes those who are “known or suspected terrorists.”

Apparently, one of those “suspects” is the Executive Director of CAIR-Florida, Hassan Shibly. Shibly is a plaintiff in a lawsuit put forward by CAIR, in 2016 and continuing to this day, claiming anti-Muslim harassment by authorities and attempting to eradicate the watch list. Indeed, according to reports, Shibly has admitted to having been “searched dozens of times” because of his watch list status and “was once handcuffed” at a border crossing in Detroit, Michigan.

Just being affiliated with CAIR is a ‘red flag’ on Shibly. CAIR or the Council on American-Islamic Relations has both financial and foundational ties to Hamas. The US government has stated as such. Various CAIR representatives have served prison time and/or have been deported from the US for terrorist-related activity, and CAIR, itself, in November 2014, was designated a terrorist organization by the United Arab Emirates (UAE) government.

CAIR-Florida, the chapter that Shibly runs, reflects the same violent extremism of its parent organization. In July 2014, CAIR-Florida co-sponsored a pro-Hamas rally in Downtown Miami, where rally goers shouted, “We are Hamas,” “Let’s go Hamas,” and “Hamas kicked your ass.” Following the rally, the event organizer, Sofian Zakkout, wrote in Arabic, “Thank God, every day we conquer the American Jews like our conquests over the Jews of Israel!”

In November 2006, after the 2006 Lebanon War, Shibly told his university’s publication that Hezbollah is “basically a resistance movement” and “absolutely not a terrorist organization.” In August 2014, Shibly tweeted that “Israel and its supporters are enemies of God.” In April 2017, Shibly promoted a video on social media lauding convicted Palestinian terrorist Marwan Barghouti as a “hero.” And although it is not against the law to provide legal help to a criminal, given his own terror-linked background, it is suspicious that Shibly, an attorney, this past February, provided legal representation to an ISIS wife who threatened President Obama’s life.

Last month, once again, Shibly crossed the line into terror, when he used the CAIR-Florida headquarters in Tampa, Florida to host a meeting with convicted Palestinian Islamic Jihad (PIJ) operative Hatem Naji Fariz. In July 2006, Fariz pled guilty in federal court to providing services to associates of PIJ and received a 37-month prison sentence. According to the indictment against him and five others, Fariz “was a PIJ member” and did “conspire… to commit offenses against the United States… by making and receiving contributions of funds, goods, and services to or for the benefit of the Palestinian Islamic Jihad.”

Also attending the meeting was former CAIR-Florida Executive Director Ahmed Bedier. Bedier, during Fariz’s 2005 trial, served as the unofficial spokesman for the main defendant of the trial, PIJ co-founder and then-North American PIJ leader Sami al-Arian. During a December 2005 television interview of Bedier, when asked if he believed al-Arian’s involvement with PIJ was immoral, Bedier notoriously answered, “To a certain degree. Now, before 1995, there was nothing immoral about it.”

The meeting was called to discuss the murder of Rafat Saeed, a congregant from the PIJ-linked mosque that Fariz is the Managing Director of, the Islamic Community of Tampa (ICT), a.k.a. al-Qassam (named after Izzedin al-Qassam, who was the inspiration for the founding of PIJ). Saeed was gunned down by fellow mosque-goer Mohammed Rakibul Haque, in the parking lot of a nearby mosque, the Islamic Society of Tampa Bay Area (ISTABA). Saeed, who has previously been arrested and had his driver’s license suspended for criminal traffic offenses, allegedly got into an altercation with Haque over Saeed’s “speeding through the parking lot.”

One day prior to the meeting, on May 21st, Shibly posted on Facebook a link to a donate page set up by Fariz to raise money for al-Qassam, while using photos of the deceased Saeed and information about the funeral. [Less than a week following the meeting, another death of note took place, that of Fariz and al-Arian’s co-defendant, Sameeh Hammoudeh.]

In addition to all of these things, Shibly owns guns. He proudly modeled with them, including one photo of him gripping an AK-47 Rifle, for stories in both The New York Times and The Huffington Post. This is a further reason for him wanting off of the terrorism watch list. Following the shooting that occurred at the Pulse LGBT nightclub in Orlando, Florida, perpetrated by fellow radical Muslim Omar Mateen and which left 49 dead, leaders of the Democratic Party attempted to pass legislation restricting firearms from being purchased by those found on the watch list.

Shibly’s past and present exemplify the need for the US government’s terrorism watch list. His involvement with a Hamas-related group, his defense of and warped view of Hezbollah, his deep-seated hatred for supporters of Israel, and his get-together with a member of Palestinian Islamic Jihad and assistance in fundraising for him are enough of an indictment. And the fact that he owns guns – combined with his terrorism ties – exacerbates an already dangerous situation and increases the potential threat Shibly poses to society.

Hassan Shibly is the reason why the terrorism watch list must remain intact, and his actions prove why he must remain on it.