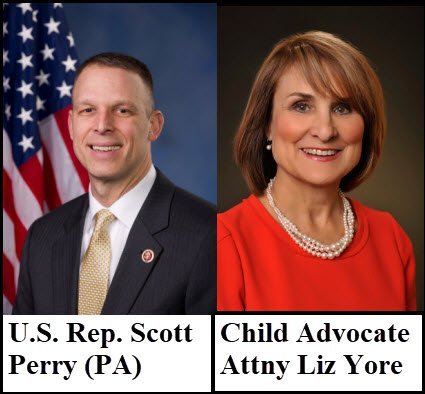 What kind of Congressman would risk the wrath of the Muslim Brotherhood political machine and oppose the Sharia crime of FGM (Female Genital Mutilation)?  Congressman Scott Perry [PA 10] did just that!

He is an outspoken critic of the Muslim Brotherhood and its infiltration of American institutions, especially the Military.  A brigadier general in the Pennsylvania Army National Guard (recently retired) with 44 combat missions as a helicopter pilot in Iraq.  He tells us what he is taking on to stop the horrendous action taken within a culture that is here on U.S. soil and implementing their standards, not U.S. standards impacting women and girls.  He understands this is UNACCEPTABLE and MUST STOP!  He is not only working at the federal level, but also within his own state of Pennsylvania to make it law that no femaled will have to face this barbaric practice.

Along with Congressman Perry, we also have a courageous Activist/Attorney and International Child Rights Advocate, Liz Yore.

She is General Counsel of the National Center for Missing and Exploited Children and Heads up: End FGM Today

Liz tells us what every American needs to know to recognize signs of FGM happening in their community, what can be done to stop it, and where to go to report it.   This is NOT stopping, but growing and with Congressman Perry’s help, is a first step to get it stopped.

What will it take to produce America’s first indictment, prosecution and conviction for the practice of the Sharia crime FGM on girls and women in America?  What are the implications for the Infidel, non-muslim females?  Who will stand against Sharia practices nation wide?

Contact your Congressional representative to support Congressman Perry’s Resolution and  Bills below:
This Resolution passed in the House, 393-0, a major accomplishment.
These bills are critical to begin to get FGM stopped across America:
Please read the Press Release describing them.
Educate yourself on FGM, it’s practice, the dangers each girl or woman faces, and what you can do by following EndFGMToday.com and YoreChildren.com

Take a stand today to STOP it… or it will be YOUR future!