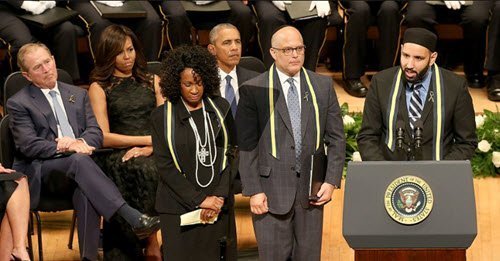 Omar Suleiman is an Islamic scholar and Imam currently in Irving, Texas. He is and has been the leader of numerous Muslim Brotherhood organizations across America, advocates against liberty, and promotes barbaric sharia (Islamic Law).

Yet, elected officials, pastors, and citizens across Texas welcome this jihadi with open arms.

In May 2019, Suleiman offered the invocation on the floor of the U.S. House of Representatives in response to an invitation by U.S. Congresswoman Bernice Johnson of Dallas, Texas.

Suleiman teaches sharia and jihad at the Al Maghrib Institute, a Muslim Brotherhood operation which has produced a large number of jihadis over the years including Tarek Mehanna, Ramy Zam Zam, Daniel Maldonado and Nuradin Abdi among others.

Suleiman also served as the Imam of the Muslim Brotherhood’s Jefferson Muslim Association in New Orleans, Louisiana for six years.

The Jefferson Muslim Association is owned by NAIT, the bank for the Muslim Brotherhood in North America.

Suleiman also served as a Director for the Islamic Circle of North America (ICNA), also identified by the U.S. government as a part of the U.S. Muslim Brotherhood’s network in the US v HLF trial. ICNA’s training program for youth and adults in the U.S. (page 117) calls for muslims to “wage war” against non-muslims until an Islamic State is established under sharia (Islamic Law).

The By-Laws of the Muslim Brotherhood state the Brotherhood was created to “fight the tyrants and enemies of Allah as a prelude to establishing the Islamic State.”

Suleiman is the Founder and President of the Irving based Yaqeen Institute for Islamic Research, whose “Team” is a Who’s Who of the U.S. Muslim Brotherhood.

Suleiman explains his parents were “displaced Palestinians due to the occupation” and he has proclaimed himself to be a champion “of the Palestinian cause”; called Zionists “enemies of God”, and  references Israel’s military operations as “massacres.”

Omar Suleiman has called for the 3rd Intifada (war) against the Israelis.

On March 5th 2018 Omar Suleiman was arrested on Capitol Hill with senior leaders of Muslim Brotherhood’s jihadi Movement in the U.S. including Linda Sarsour, Dawud Walid, Zahra Billoo and Nihad Awad, the leader of Hamas in the U.S. (CAIR). [The terrorist group Hamas is an inherent part of the Muslim Brotherhood.]

The group was arrested for protesting in support of legislation to protect unauthorized immigrants brought to the U.S. as children.

On January 19, 2019 Omar Suleiman and 32 others were arrested at the Tijuana/San Diego Border as part of the “Love Knows No Borders” movement in support of immigrants and asylum seekers. The focus of this is to reduce U.S. border security and screening for those illegally entering the United States.

Suleiman was a speaker at the ICNA-MAS convention in Washington D.C. on April 19-21, 2019  (Easter weekend). As stated above, the ICNA-MAS training guide calls muslims to “wage war” against non-muslims to establish an Islamic State under Islamic Law (sharia), which are the stated objectives of Al Qaeda and the Islamic State.

Suleiman will be the keynote speaker at ICNA-MAS Annual Convention December 27-29, 2019.  The three founders of the Muslim American Society (MAS) were senior Muslim Brotherhood leaders in the United States when MAS was established in 1993, including the leaders of the U.S. Muslim Brotherhood at the time Ahmed El-Kadi.

In the US v Sabri Benkhala appellate case involving terrorism, the U.S. government officially stated “MAS was founded as the overt arm of the Muslim Brotherhood in America.”

The Islamic Circle of North America (ICNA) drives much of the Interfaith Outreach programs in America and propagates a false narrative about Islam, and equates it to Christianity and Judaism.  Suleiman is the Co-Chair of Faith Forward Dallas at Thanks-Giving Square, a “multi-faith alliance.”

Omar is an experienced islamic scholar and leading the Islamic education in Texas – he understands Sharia.  With this in mind, here are a few of the items directly from authoritative Islamic Law (Sharia):

“Jihad means to war against non-muslims…jihad is a communal obligation (o9.1)…jihad is personally obligatory (09.2)…” from [Reliance of the Traveller, Islamic Sacred Law]

“When a person who has reached puberty and is sane voluntarily apostatizes from Islam, he deserves to be killed.” [Reliance of the Traveller, o8.0]

“The following are not subject to retaliation (4) a father or mother for killing their offspring or offspring’s offspring.” [Reliance of the Traveller, o1.2]

Omar Suliman is extremely active in the Dallas area, and is described as a “rising star.”  He is listed as one of 25 influential American Muslims and was able to persuade google to alter its algorithm so searches on Islamic words will result in a softer definition, often being objectively false.

One example is the word “taqiyya.”  Taqiyya is a form of permissible lying in Islam. However, as the photo below shows, a google search of “taqiyya” will produce the “definition” the word means, “Prudence, Fear” which is exactly what this word does not mean in Islamic law (sharia).

Every citizen, local official, businessman or woman, pastor, or anyone else in Texas providing a platform to Omar Suleiman is helping America’s enemy move their agenda forward and put Texans in greater danger.

Those who wish to argue that Suleiman wears a suit and is “nice” should consider that Suleiman is overtly sharia-adherent and works to impose sharia on others, making him a “Jihadi” by definition. If being “nice” gets you to surrender to him, he will do it.

We are at war. Texans need to begin acting like it and hold their local and state officials to a higher standard of adherence to their oaths of office.

Understanding the Threat is the only organization in the nation giving citizens, police, and local officials tools to identify jihadis, map out the jihadi networks in your local area, and dismantle these networks.

We need you to help us in this fight and educate your elected officials, school board members, pastors and your entire community!

Join UTT and together we can take the fight to this enemy and put FREEDOM on the offensive where it belongs.