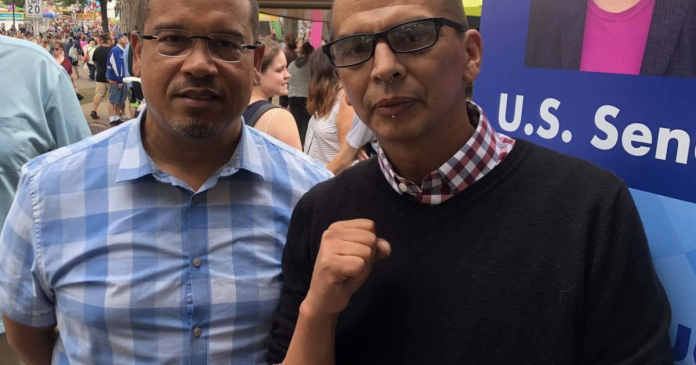 The attack on Ngo was premeditated, according to Ngo’s own words before the attack happened. Antifa used quick-dry cement, which they filled milkshake cups with — a tactic known as “milkshaking,” which Antifa has clearly taken to a new violent level.

Ellison was called out for deleting his infamous tweet praising the ANTIFA handbook, which he held in a photo, as the book that would “strike fear in the heart” of President Donald Trump.

That tweet is preserved. So is the selfie that went along with it.

Ellison’s connections to Antifa — specifically the Portland wing of the left-wing network — are deeper than a single tweet.

On the heels of an unprecedented Minneapolis Police press conference this week in which officers warned citizens to not vote for Keith Ellison, photographs obtained by Big League Politics contributor Laura Loomer show Ellison and Luis Enrique Marquez, a notorious leader of the Portland ANTIFA who has a criminal record and has carried the Communist flag.

Ellison’s support of ANTIFA is no secret, but as a candidate for Attorney General, his relationship with a violent member of ANTIFA, which has been designated as a domestic terrorist organization by the US Department of State, is concerning.

As a result of his criminal actions as the leader of Portland ANTIFA, Luis Enrique Marquez was booked into the Multonomah County Jail and Conditionally released June 30, 2018 having been charged with two counts of theft (one 2nd degree and one 3rd degree) and 3rd degree assault per Jail Employee ID 93275.

Luis Enrique Marquez was one of those nine people arrested in what police described as violent protests.

Luis Enrique Marquez not only has a history of arrests, but he is the subject of several YouTube videos which display his ANTIFA associations and violent behavior. Again, this is who Keith Ellison was spotted hanging out with at the Minnesota State Fair. Sources who wish to remain anonymous for the sake of their safety told Big League Politics that Ellison spent over an hour with Luis Enrique Marquez, whose next court date is scheduled for November 28, 2018 according  to Multonomah Court employee Anthony Tran.