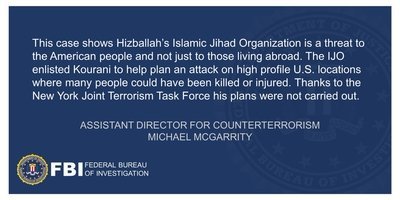 An Iranian network of terrorist cells is spread out around the world, ready for activation at any time as tensions in the Persian Gulf remain high. Threats by the Islamic Republic to escalate its standoff with the United States mean that the chances of an Iranian proxy terrorist activation are rising.

Biting American sanctions are causing unprecedented damage to the Iranian economy. In response, the radical Shi’ite regime has already provided the world with a sample of its ability to order attacks that destabilize the Middle East.

Iranian-backed Houthis in Yemen recently launched explosive drones and cruise missiles, targeting Saudi Arabian oil installations and airports. An Iranian-backed Shi’ite militia in Iraq, Katai’b Hizballah, is suspected of firing rockets at U.S. interests, and the Islamic Republican Guards Corps (IRGC) launched mine attacks on civilian oil tankers in the Strait of Hormuz and the Gulf of Oman.

These incidents represent a small sampling of Iran’s capabilities. The Iranians have built up a wide-reaching network of radical surrogates which extends beyond the Middle East. Members of this network range from hierarchical terror armies like Hizballah, armed with massive arsenals of projectiles, to sleeper terrorist cells active in Europe, North America, and Latin America.

Israel, a frontline state that defends itself against Iran and its proxy network, has taken a lead role in identifying, monitoring, and preventing attacks, as well as alerting Western intelligence agencies to threats.

Mossad Director Yossi Cohen provided a glimpse into this shadow war in remarks delivered Monday at the Herzliya Conference. The IRGC and the Iranian Ministry of Intelligence are responsible for overseas terror operations, he said.

While the Ministry of Intelligence is responsible for setting up murder squads targeting Iranian opposition figures abroad, the IRGC, together with Hizballah, seeks to hit Israeli targets, as well as soft Jewish targets.

This would explain the discovery and recent announcement of a Hizballah bomb factory in London. It appears highly likely that the bombs were intended for Hizballah cells intent on attacking Israeli targets in Britain.

In addition, Iran’s Ministry of Intelligence activated a European terror network in June last year, sending it on a bombing mission against an Iranian opposition event that featured former New York Mayor Rudy Giuliani. The cell reportedly had half a ton of explosives. In recent years, Iranian opposition figures were murdered in Turkey and Holland, while another assassination plot in Denmark and Sweden was thwarted.

“An Iranian diplomat in Vienna headed” the France bomb plot, Cohen said. “He is now under arrest, and other [members of the cell] are under arrest in Belgium.”

Cohen also said that Iran’s overseas operations unit, the Quds Force, recruited 300 fighters in Iraq and Syria and brought them to Africa to create a terror network capable of striking Western targets across the African continent.

Iranian agents gathered “intelligence on the Iranian opposition, and on Israeli targets in Azerbaijan, the U.S., Denmark – and this is only the top of the iceberg,” Cohen cautioned. “The Mossad and the Israeli intelligence community are deeply involved in the effort to thwart these threats before the deaths of innocents occurs. We are working shoulder to shoulder with other countries to prevent more deaths.”

Iran could also order its network to attack European and Israeli targets at any time, Cohen warned, noting that Tehran accuses Israel of being behind the Trump administration’s economic pressure campaign. “One of the easiest ways to do it [strike] is through attacks on Israeli targets in Europe, and around the world,” Cohen said.

Iran has done this before. In 2012, for example, it ordered a wave of attacks on Israeli targets in Bulgaria, Cyprus, India, and Kenya in retaliation for a sabotage campaign of its nuclear program that it attributed to Israel. This included a suicide bombing attack on a bus of Israeli tourists in Burgas, which murdered six people.

Past incidents have seen Hizballah operatives scope out Israeli targets in countries as far away as Peru.

These networks have also penetrated North America, according to a series of recent reports.

Based in the U.S., Kourani reportedly visited Pearson airport seven times before being arrested. He also “scouted New York’s JFK airport and U.S government facilities. He passed the results of his surveillance activities to his Hizballah handler in Lebanon on digital storage devices,” the report said, as part attack planning surveillance operations.

In May, an American court convicted Kourani of eight counts related to his work as a Hizballah “deep-cover operative. He is scheduled for sentencing on Sept. 27,” Canada’s Global News reported.

“Kourani’s chilling mission was to help procure weapons and gather intelligence about potential targets in the U.S. for Hezbollah terrorist attacks,” a U.S. Department of Justice  press release said.

Kourani reportedly married a Lebanese-Canadian woman to evade the intelligence radar. He also befriended a Canadian airport employee, and talked him into agreeing to carry a bag on-board an aircraft.

Unit 910 was even more active in Canada than in the United States, Kourani told the FBI. It would likely try to smuggle explosives into the U.S. from Canada.

Meanwhile, in the Middle East, the Mossad director revealed that Iran had transferred $100 million to Hamas and Palestinian Islamic Jihad (PIJ) in the Gaza Strip.

Intelligence agencies around the world will need to be on high alert for Iran’s active and lethal international terrorism network.