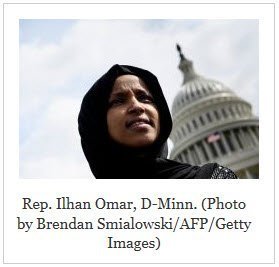 (CNSNews.com) – Rep. Ilhan Omar (D-Minn.) and ten other House Democrats have written to Secretary of State Mike Pompeo, requesting information about how information from the FBI-administered terrorist watchlist is shared with foreign governments – including governments with poor human rights records.

In doing so, she pointed to the support of the Council on American-Islamic Relations (CAIR), a sometimes controversial group that has mounted legal challenges against the watchlist, formally known as the Terrorist Screening Database (TSDB).

In a release Friday about the letter to Pompeo, Omar quoted CAIR national Executive Director Nihad Awad, who said the TSDB was “dangerous enough” in itself, but even more so when shared with “tyrannical regimes.”

Other signatories of Omar’s letter include Rep. Rashida Tlaib (D-Mich.). The two freshmen are the first Muslim women to be elected to the U.S. Congress.

Rep. Tim Ryan (D-Ohio), one of the more than two dozen Democrats running for their party’s 2020 presidential nomination, also signed.

“In our oversight role as Members of Congress, we are entitled to information as to which countries receive this sensitive and classified information about American citizens, many of whom have never been charged, arrested, or convicted of a crime,” the lawmakers wrote.

They believe that the TSDB has been shared with more than 60 foreign countries, well beyond the 38 Visa Waiver Program (VWP) countries. They said other countries with information-sharing arrangements were believed to include Albania, Slovenia, India, Brazil, Mexico, Ghana, Kenya, Mali, Niger, Nigeria, Tunisia, and Israel, they wrote. (Slovenia is in fact a VWP country.)

Omar and her colleagues voiced particular concern “that the federal government is sharing watchlist information with countries with dubious human rights records, including Saudi Arabia and China.”

“It is unacceptable for U.S. resources to contribute to the brutal repression of political dissidents abroad,” they charged.

The 11 House Democrats asked Pompeo to provide, within 90 days, specific information about the TSDB, including which countries get the data; what standards exist to determine whether the data is shared with foreign governments; whether foreign counties’ human rights records are taken into account when making decisions on sharing; and how and whether a data-sharing agreement can be rescinded once reached.

In her release, Omar quoted CAIR’s Awad as saying, “It is dangerous enough that the federal government keeps a secret watchlist of more than one million people, almost all of whom are Muslim, and treats these Muslims like second class citizens.”

“The danger, however, increases exponentially when this watchlist is shared with tyrannical regimes all across the world,” Awad continued. “Congress and the public ought to know which foreign governments receive the watchlist and what has been done to people targeted by a watchlisting system that now spans the globe. CAIR applauds this oversight.”

CAIR, which calls itself the nation’s biggest Muslim civil rights and advocacy group, is a long-standing critic of the TSDB.

“For years, CAIR has represented innocent Muslims — people who have not been charged, arrested, or convicted of a violent offense — who have been targeted by the watchlisting system,” the organization says. “Some have lost jobs, been separated from their families, and all have been stigmatized by being treated as ‘terrorists’ by their own government.”

In 2016 CAIR launched a class-action lawsuit on behalf of a group of Muslim Americans who said that being placed on the watchlist resulted in invasive travel screening and harm to their reputations.

The vast majority of those listed are foreigners. Documents lodged in the case included information to the effect that of some 1,160,000 on the list in 2017, 4,460 were U.S. nationals or lawful permanent residents.

Last April a federal judge in Alexandria, Va. said he would rule soon on the constitutionality of the watchlist.

Set up under a 2003 directive by President George W. Bush in response to 9/11, the TSDB is described as “a single database that contains sensitive national security and law enforcement information concerning the identities of those who are known or reasonably suspected of being involved in terrorist activities.”

The directive laid the groundwork for U.S. authorities to share information with foreign counterparts.

“The Secretary of State shall develop a proposal for my approval for enhancing cooperation with certain foreign governments, beginning with those countries for which the United States has waived visa requirements, to establish appropriate access to terrorism screening information of the participating governments,” it stated.

In their letter to Pompeo, the lawmakers said since the directive was issued the federal government had not just given information to foreign governments, but had also acknowledged placing individuals on the list at the behest of foreign governments.

“It is significant to note that the evidentiary standard for being placed on the TSDB is very low: the government need only have ‘reasonable suspicion’ that someone is involved in terrorism,” they wrote.

According to the FBI, a “suspected terrorist” for the purposes of the list is a person “who is reasonably suspected to be engaging in, has engaged in, or intends to engage in conduct constituting, in preparation for, in aid of, or related to terrorism and/or terrorist activities.”