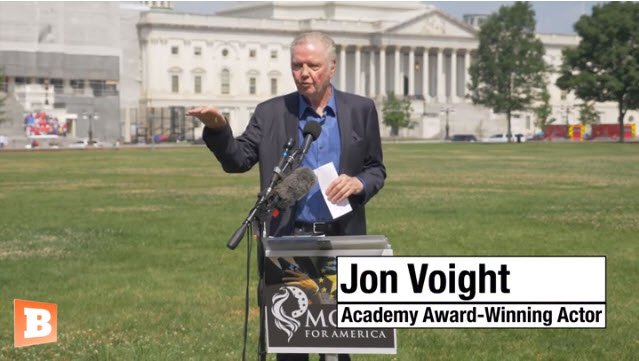 Over 40 Gold Star mothers and wives gathered on the U.S. Capitol lawn for the anti-socialism “Rally for Freedom,” joined by outspoken    conservative actor Jon Voight on Independence Day.

Voight said that our fallen heroes risked everything, just like the nation’s Founding Fathers.

The Gold Star women wanted to take a stand against what they say is the radical socialist agenda pushed by the extreme left and remember their fallen heroes, who risked everything for the sake of liberty.

Voight spoke at the event, saying those fallen heroes risked everything, just like the nation’s Founding Fathers.

“I’m an actor, so I imagine what was going on in the minds of these founders when they faced this crisis– wrote this beautiful document,” Voight said.

“And then somebody said we gotta sign it. And I know– and we know from history that they were putting their lives on the line, just like these people we celebrate today,” he continued.

“I can imagine them looking around the room, thinking quietly to themselves about their families and then saying to themselves, ‘You know, we got to do this,’” he added.

“In saying that, I want to tell you, I have never been happier than to be with these assembled families,” Voight continued. “Never. They’re the greatest. We’ve had a lot of laughs, all of this stuff, and their loved ones are definitely watching over and definitely guiding us.”

Voight was originally scheduled to speak at the end of the event but stood up and spoke in the middle to assist Breitbart News in covering the special gathering.

“I respect Breitbart News and am very grateful for them being here,” Voight said.

“I hope this is recorded in every way,” he continued. “If Breitbart loses a battery, someone else step up and get this recorded, because this information, these people, are so eloquent and can’t help but reach the hearts of all of us.”