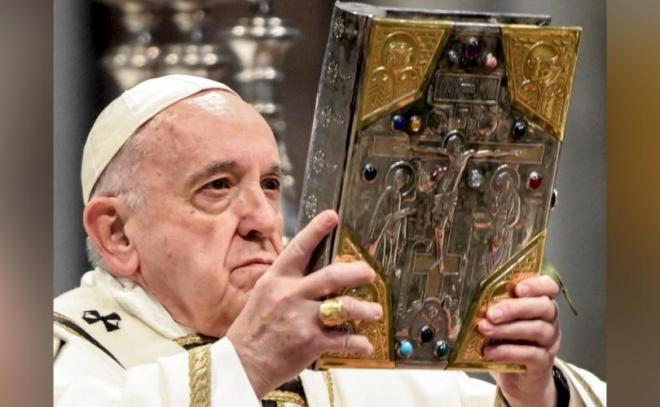 For God is not the author of confusion, but of peace, as in all churches of the saints ( 1 Corinthians 14:33)

The Vatican has released the preparatory document for its upcoming Pan-Amazonian Synod of bishops in October, and it contains yet another window into Pope Francis’ green-friendly worldview in which he subtely and deceptively turns traditional, biblical Christianity on its head.

You will recall that just a couple of months ago a group of more than 30 Catholic scholars and clergy signed an open letter to the bishops, pleading that they hold the pope accountable for his anti-Christian, anti-Catholic teachings with regard to marriage, moral teaching, etc. They declared him guilty of at least seven heresies.

The Pan-Amazonian document, titled Instumentum Laboris, will do nothing to assuage the fears of these 30-plus brave Catholic leaders. It’s classic Francis, peppered with radical political ideas cloaked in religious verbiage and lovingly promoted as “ecotheology.”

Among the many strange document proposals are:

Reading through Instrumentum laboris, I came away with the impression that Western Christendom, defined by its capitalism and colonialism, represents the world’s sinners while the pagan Amazonian Indians represent the saints. We Christians need to be evangelized by them as much as they by us.

It’s all about diversity

The document is fraught with references to “Mother Earth” while touting a “New Pentecost” based on the “diversity of religion and culture” in the Amazon region of South America that Francis sees as a template for the world.

I see this as a continuation of the same deception that Francis has spun with his Muslim outreach, only here he is focused on the pagan peoples of the Amazon.

You will recall that just a few months ago we reported that Pope Francis met with the spiritual leader of the world’s most important institution on Islamic law, Grand Sheikh Ahmed el-Tayeb of Egypt’s al-Azhar University, and assured him that Islam would get the Vatican’s utmost respect as a religion of peace. Islam is part of the “diversity of religions” that are “willed by God,” the pope and his Muslim partner wrote in their Catholic-Islamic pact.

Well, now the pope is preparing to meet with Amazonian tribal leaders to assure them that they also are on the right path, part of the kingdom of God, under the same grand umbrella of religious diversity blessed by the Creator.

There are too many disturbing passages in the pre-synod document to go into here but I recommend all Christians read it and familiarize themselves with the vernacular of the current push toward creating a global religion that all can buy into.

The pope and his co-laborers at the United Nations truly intend to leave no religion behind. It doesn’t matter if you are Buddhist, Hindu, pagan, Christian, Jewish or Muslim. We’re all part of the same big family and we just need to learn how to peacefully co-exist in the burgeoning new world order.

Some traditional Catholics are worried about the special accommodations proposed for married priests and female clerics in the Amazon, but there is much more to be concerned about from a broader Christian perspective.

“European media are focusing on clerical celibacy and the possible diaconal ‘ordination’ for women, and rightly so. These are both very important aspects of the plan, but there is a whole story behind it. What they want is to change the whole Church according to the most radical versions of liberation theology — the so-called indigenist and ecological theology.”

As you may know, Pope Francis is big on evangelization. He wrote a whole book on it.

For Francis, evangelizing the lost does not mean converting them to the truths and dogma of historic Christianity. No, for him it’s more about “dialoguing” with the world’s diverse religions and coming to a point of understanding and mutual respect. Remember, these diverse religions are “willed by God.” We’re all just traveling down a different path to the same heaven, if this pope even believes in heaven. I’m not convinced he does.

The very word “conversion” takes on different meaning for Francis and the liberal theologans he has empowered at the Vatican.

Whenever the word “conversion” is used in the Amazonian document we see it interwoven with the environmental language of sustainable development that’s so prevalent at the United Nations, on college campuses and in corporate board rooms.

The pope talks about creating a church “with an Amazonian face.” The document states:

“To mold a Church with an Amazonian face has an ecclesial, social, ecological and pastoral dimension, often conflicting. In effect, the political and legal organization has not always taken into account the cultural face of the justice of the peoples and their institutions. The Church is not alien to this tension. Sometimes it tends to impose a culture alien to the Amazon that prevents understanding their peoples and appreciate their worldviews.”

Excuse me, but I thought we were supposed to be building a church that looks like Christ – not the Amazonians, not the Londonites, the Parisians or the New Yorkers. Putting on Christ always means imposing a culture that is “alien” to our natural impulses and emotions. This is what Christianity is all about. Taking up our Cross and following Him, putting our old ways of thinking aside and being transformed by the Life of Christ.

But that’s not what you get from this papal document. It touts an “ecological conversion” which means “embracing the mystical-interconnected and interdependent nature of all creation.”

Exactly who are we supposed to be worshipping here? The Creator or the creation? From the language used by Francis, it’s confusing at best.

Just as the pope kissed the grand sheikh of al-Azhar and prayed in his mosque, it seems he is prepared to dance with the demons of pagan Amazon.

In fact, this Vatican document has more condemnation for European “colonizers” than it does for the pagan practices of the indigenous peoples.

Despicable practices like headhunting, child sacrifice and scorcery are not even mentioned in the document.

Please know that my concerns are not racially motivated. When the Lord’s apostle, St. Paul, arrived in the great cities of Greece and Rome, he found cultural practices every bit as wicked as those being practiced today in the Amazon. And much of Western culture today is reverting back to the brutality of paganism as it has moved decisively away from its Christian roots over the past 100 years [just look at the numbers of children being aborted and the rising evil of human trafficking, a form of slavery, legalization of prostitution and mind-altering drugs].

In fact, there is a case to be made that the Vatican’s call for a “new” theology set aside for the Amazonian peoples is itself racist.

Again, I turn to The Remnant, for an astute observation:

“In what sense is this not racist? Fly in the pope to take photos with folks in native Amazonian costume, call in the media, and then tell the world that for the sake of the brown and black people who can’t possibly comprehend the teachings and disciplines of the Church, the time has come to change the Church’s rules.”

One can see in this papal document the influence of the late Jocques Maritain, a French Catholic philosopher from the early 20th century and author of the 1936 book, Integral Humanism. In this tome, Maritain, a close friend of the radical American Marxist Saul Alinsky, advocates for a new, more open Christianity based in religious pluralism and democracy. Creating this integral humanism would not be a matter of trying to establish God’s moral laws on earth, Maritain tells us, but rather of making the world a “place of a truly and fully human earthly life.”

In 1951, Maritain further developed his ideas in Man and the State, in which he speculated on the possibility of a world government.

Pope Francis, in working with the world’s most powerful Islamic leaders, evangelical Christians, Jews and now pagans, seems to believe that before we can have world government, we must embrace a loose form of world religion. He has been exposed as a deciever. Catholics should run from him like the plague.