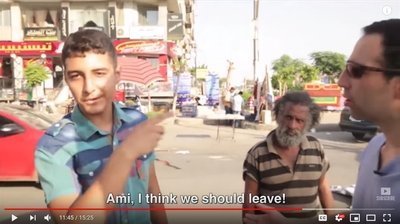 A new short documentary by filmmaker Ami Horowitz gives an inside glimpse of what Muslim Brotherhood members really think. Horowitz traveled to Beirut, Istanbul, Cairo and California to speak with activists, as well as members on the streets in Egypt.

“What I found when I sat down with them, and I’ve spoken with dozens of them, is that they’re very open about what their plans are and what they want to do,” Horowitz said.

Brotherhood operatives like to say they are part of different organizations from country to country. However, Horowitz found that many of them knew each other and had similar goals despite coming from different countries. The Brotherhood’s ultimate goal is a global Islamic state.

“They were all from disparate parts of the world, and they all knew one another,” Horowitz told the IPT. “They all went to certain meetings that they all kind of attended … I found that when you scratch the surface and get behind the veneer that the connection between them is less murky.”

Horowitz has made videos and movies for the past 12 years. This film was privately financed and is available for viewing at no charge.

Some of the most surprising information he obtained came from a Brotherhood member living in southern California. An Egyptian court sentenced Nidal Mohamed Sakr to death for allegedly killing a police officer, but he managed to escape to the United States in 2014. Sakr says he was born in Providence, R.I.

He was born into a Muslim Brotherhood family, he said in a 2012 video, and his mother attended talks in Egypt by Brotherhood founder Hasan al-Banna. He formally joined the Brotherhood in the early 1970s in Jordan. That brought him into contact with Osama bin Laden’s late mentor Abdullah Azzam, whom Sakr said recruited him into a jihadist cell that fought against Israel. Sakr now lives in Huntington Beach, Calif., near Los Angeles. He called for President Trump’s execution in an October 2017 tweetHorowitz uncovered.

Horowitz said he did not know whether the Secret Service contacted Sakr about the post.

In Horowitz’s film, Sakr explained that Brotherhood operations depend on an activist’s home country. In the United States, Brotherhood members work within the system.

Sakr called groups on the political Left his “backers and … defenders in political circles.”

“The Left [was] the natural ally of course. They were our backers and supporters, and actually coalition partners. I mean, now Republican Party, actually is basically ‘Heil Hitler’ kind of party, you know?” Sakr said.

Many Brotherhood members believe that the Muslim Brotherhood will outlast the United States due to its political infighting and due to its “vulgar and barbaric” actions, Sakr said.

Sakr’s statements left Horowitz believing that Sakr is in the U.S. to bring down the U.S., he told the IPT.

Left-wing support for the Muslim Brotherhood particularly fascinated Horowitz. He attributes it to the Left’s concept of intersectionality, which says that all supposedly oppressed groups are linked and need to work together.

“At first blush, you would think that the Muslim Brotherhood and the Left would be sworn enemies with antithetical values to one another, and to a large extent that is true,” Horowitz said. ” … But the value that the Left holds dearest is this notion of intersectionality.

“Therefore, the Left looks at Islam generally as being an oppressed class because they look at it through a West-centric viewpoint, and therefore, they feel they have to lift Islam up including radical Islam.”

Muslim domination of the United States is seen by the Muslim Brotherhood as its “holy grail,” Horowitz said in his documentary.

“I don’t think there is any morals in America. If you say and don’t practice there is no morals,” Turkey-based Brotherhood leader Ashraf Abdel Ghaffar told Horowitz. “Islam is the solution everywhere. Why? Because there is a standing morals.”

Groups like the Council on American Islamic Relations (CAIR), the Islamic Society of North America (ISNA), the Muslim American Society (MAS) and the Muslim Student Association (MAS), which all have documented Muslim Brotherhood roots, deny having any connection with the broader movement. Horowitz notes that many of the Brotherhood-linked founders of these organizations remain active with them.

Horowitz’s film can be viewed here.