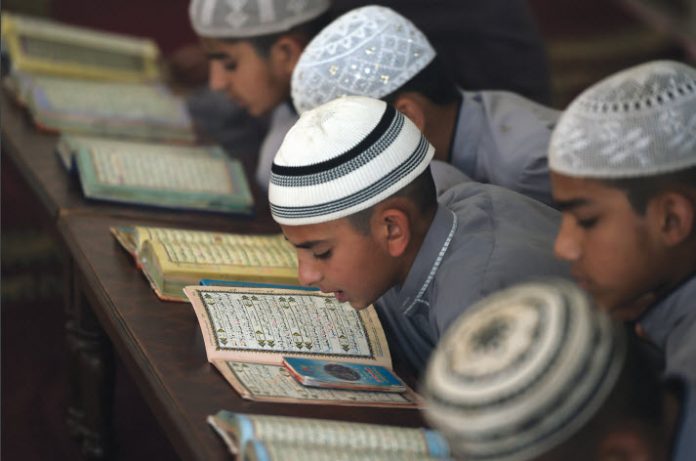 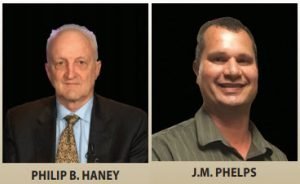 On March 23, 2019, the DailyMail.com reported on the findings of a previously secret UK Home Office study.  Entitled Terrorism Fears As 3,000 UK Children A Year Go To ‘Jihadi’ Schools In Pakistan, the chilling report revealed that young boys in Pakistani madrasas are taught a ‘glorified version of jihad,’ and that parents often send their sons to these madrasas during the summer holidays.

The DailyMail article also stated that officials in the UK fear that attending these madrasas increases the risk of radicalization (toward Jihad), while citing the example that two of the four known July 07, 2005 London bombers had also enrolled in such a madrasa before launching their attack, which killed 52 people and injured at least 770 more.

According to the report, more than 3,000 British children (almost exclusively boys) are being enrolled in these Islamic schools in Pakistan each summer.

However, this is not really a new problem.  As revealed in an October 2001 interview with Ambassador Richard Holbrook, the practice of sending young boys to study in Salafi madrasas is common throughout the Islamic world, and has been a common practice since long before the September 11, 2001 attacks on the World Trade Center in New York City brought the reality of Jihad to the West.

I think that one of the tragedies of this story is that the Saudi Arabians exported their problem by financing the schools, the madrasas, all through the Islamic world.  I saw this in Uzbekistan a few years after Uzbekistan got out of the Soviet Union, became an independent state in cities like Tashkent and Samarkand, where the Saudis were funding these schools teaching Koranic studies and creating a class of people for whom education was simply the Holy Book, the Koran.

On November 15, 2001, Frontline released a detailed analysis of the global problem with fundamentalist (Salafi) madrasas entitled Saudi Time Bomb?  In the Introduction, we are informed that the Frontline program will chronicle:

‘[H]ow these madrasas grew into the thousands during the ten-year Afghan war against the Soviets…and how – because of the nature of that war – the madrasas, most notably in Pakistan, became training centers for jihad.’

“They were recruiting, organizing schools which used Islamic ideology as a way of creating a very efficient guerrilla army,” says Vali Nasr, an authority on Islamic fundamentalism.  “You have the whole rise, if you would, of Islamic West Points.”

On May 13, 2016, this co-author (Philip B. Haney) discussed the threat posed by Salafi madrasas in the Indian sub-continent (Afghanistan, Pakistan, India, Bangladesh and Myanmar) during an interview on Secure Freedom Radio, hosted by Frank Gaffney.

During the interview, the  following was stated by Haney:

Tablighi Jamaat is an organization with between seventy-five and a hundred and twenty-five million members. Outside of America, it’s known as the Army of Darkness.  It originated in the 1860’s and very soon they found out that they had an identical ideology as Wahhabi Saudis.  And so, they formed an alliance.  That is why you constantly hear about Saudis funding madrasas, schools, in places like Pakistan, India, and Bangladesh.  That is essentially the Deobandi movement, the branch of Islam that originated out of the Asian subcontinent.

On June 12, 2016, this co-author joined SiriusXM host Stephen K. Bannon for a special edition of Breitbart News Sunday.  This interview was conducted during the first evening after the early-morning shootings by Omar Mateen at the Pace Nightclub in Orlando, Florida, which killed 49 people and injured at least 53 more.

“According to its website, the Islamic Center of Ft. Pierce – where Omar Mir Seddique Mateen regularly attended (according to the imam, Shafeeq ur-Rahman); he confirmed that [it] was the mosque…Mateen attended.

[In turn], the Islamic Center of Ft. Pierce is directly linked to an organization called the Sharia Board of America.”  Haney explained that sharia means “Islamic law,” and said the Sharia Board of America is, in turn, a “direct division of an organization called Rahmat-e-Alam,” whose name means “Mercy to the World,” [and that] Rhamat-e-Alam is directly affiliated with the Darul Uloom Chicago, which [is] “a madrasa…that teaches young boys to memorize the Koran.”

Bottom line, Salafi madrasas are not just a problem in India, or Indonesia, or Pakistan, or South Africa, or Uzbekistan or the UK, or sub-Saharan Africa, or in America, but in virtually every place in the world where Islam is well-established, or is in the process of becoming established.

Returning now to the DailyMail article, we learned that exposing young boys to Salafi Islamic ideology has some UK government officials fearful that these British-Pakistani citizens may return to the UK with a heightened affinity and inclination toward participating in terrorist (Jihad) activities.

For example, Mohammad Sidique Khan and Shehzad Tanweer, British-born sons of Pakistani immigrants, both attended Deoband madrasa courses in Pakistan.  A year later, on July 07, 2005, they helped conduct the bus bombings which killed and injured hundreds of people in downtown London. 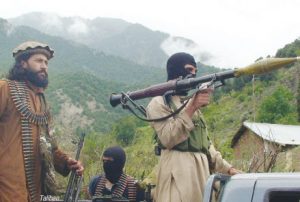 The global Deoband Islamic movement, which was founded as an Islamic revival movement in Deoband, India in 1867, has several major branches, including Jaish-e-Mohammed, Jamiat Ulema-e-Hind, Jamiat Ulema-e-Islam, Tablighi Jamaat, and the Taliban itself.

Also, many members of these Deoband groups are now affiliated with Al-Qaeda of the Indian Subcontinent (AQIS), which is a coalition of Salafi Islamic Jihad groups from Afghanistan, Pakistan, India, Bangladesh and Myanmar.  The 20-page AQIS Code of Conduct (i.e., conduct according to Sharia) can be accessed here.

And, although their leaders deny any promotion of radical (Jihad) ideology, the publicly-funded Deoband Darul Uloom Haqqania (DUH) madrasa in the Khyber Pakhtunkhwa region of western Pakistan (near the border with Afghanistan), the Deoband Jamia Binoria madrasa complex in Karachi, and the Deoband Jamiatul Uloom Ul Islamia madrasa in Azad Kashmir were cited as sources of particular concern in the DailyMail report.

The leaders of all three of these Deoband-linked madrasas continue to insist that extremism is not part of their Islamic teaching.  However, the DUH madrasa, also known the ‘University of Jihad’ includes an impressive roster of former students such as Asim Umar, Emir of AQIS, and Mullah Omar, a former leader of the Taliban, who received an honorary doctorate from DUH. 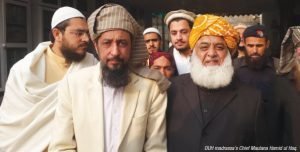 Also, when questioned about the school’s sympathy toward the Taliban, the DUH madrasa’s chief Maulana Hamid ul Haq (aka ‘The Father of the Taliban,’ who was stabbed to death on November 02, 2018 in Rawalpindi), stated that all of the students at his madrasa were referred to as ‘Taliban.’ 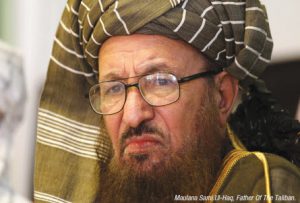 Technically, this  is correct – since ‘Taliban’ is simply the plural form of the Pashto word for Student (Talib).  Incidentally, the word for Tulip (the flower) is derived from this same word (Talib), because tulip flowers were thought to look similar to the turbans worn by Islamic scholars and students (the ‘Talibs’) in the part of Asia where tulips originally came from.

Meanwhile, according to the DailyMail article, an official from the Jamia Binoria denied any involvement in Jihad extremism, while adding that British students no longer attend the madrasa.  Haji Bostan of Dewsbury, West Yorkshire, the British founder of the Jamiatul Uloom Ul Islamia madrasa, also denied there were any ties to terrorism, while also adding that British students do not even enroll at the madrasa.

However, the truth is that virtually all of the members of the intertwined and closely affiliated Deoband groups discussed just above will attend a madrasa at some point during their life.  A small number of these taliban (students) will focus on academics and Sharia law, and will go on to become imams in local mosques, while some will leave the madrasa to become Islamic missionaries in countries around the world, but many others will travel to conflict areas (sometimes very far away from their homes) to participate in the global Jihad.

Although the agenda of indoctrination and the Islamic curriculum in these Salafi madrasas often goes unnoticed, they still pose a very dangerous threat.  Parents in the UK (as well as in America and other countries around the world) are using the guise of summer holidays in their homeland to cover up enrolling their children in one of the estimated 20,000 madrasas in Pakistan, which, incredibly, may also receive financial support – including possible inadvertent funding through taxes – directly from Britain.

In other cases (as here in America), young boys are taken completely out of the public school system, and are sent instead to a local madrasa, where they memorize the Quran (earning the title of Hafiz = ‘Guardian’ or ‘Memorizer’), which then qualifies them to attend higher-level courses, where they study to become either an imam, or a teacher of Islamic Sharia and the Hadith.

Madrasas In America, Too

As alluded to earlier in this article, there are significant parallels between America’s experience with the Tablighi Jamaat networks and what has been unfolding in the UK.  For this reason, it remains all the more troubling (perplexing) that the U.S. government would deliberately and intentionally destroy a Tablighi Jamaat-centered case and eliminate information out of its terror threat database.

However, as described in the book See Something, Say Nothing, this is exactly what happened under President Barack Obama in the summer of 2012.  As a result, members of Tablighi Jamaat were essentially granted a pass from most security agencies in the West.  As of today (April of 2019), this situation has still not been remedied.

Meanwhile, as the Tablighi Jamaat movement maintains a foothold in American mosques, while possibly sheltering imams and Salafi leaders with known or potential ties to terrorism, the global coalition of Deoband-linked organizations is also generating a great deal of new-found momentum within the boundaries of the Indian subcontinent.  This coalition, which became clearly visible in 2014, and is known as AQIS (as discussed above), has quickly become a new center of gravity for the Salafi, pro-Jihad, pro-Sharia Global Islamic Movement (GIM; also see here & here).

Western specialists are largely ignoring the threat, focusing instead on Arabic-speaking Muslim Brotherhood-linked groups like ISIS and Hamas, for example.  This has created a blind spot in the big picture view of counterterrorism analysts in the West, which should now include macro-organizations like AQIS that are operating mainly in Pashto/Urdu-speaking countries, which, in combination, have five to ten times more active Salafi Jihad groups than all the rest of the world combined.

It’s no accident that the European headquarters of Tablighi Jamaat is in Saville Town, Dewsbury, England, or that one of the largest Tablighi Jamaat mosques in Europe (and thus the West), which is known as the Markazi Masjid, aka the Central Mosque, aka the Dewsbury Markaz, aka Darul Ulum, is also located in London.

Identifying the source of Jihad ideology, as taught in the Salafi madrasas in the West, as well as in other countries around the world, may not prevent every possible terrorist attack, but it would certainly help provide strong indicators (i.e., connect the dots) between the Islamic indoctrination of young boys and men, and future terror attacks.