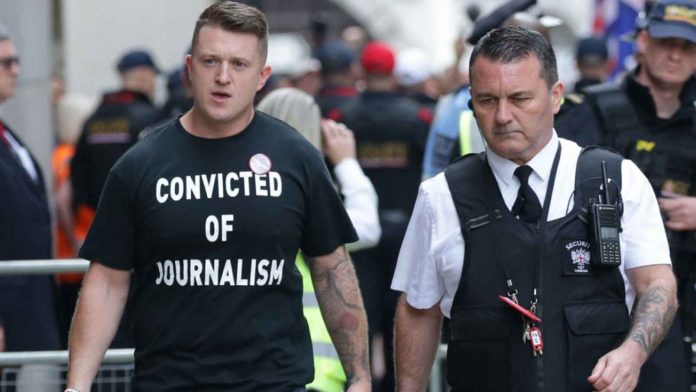 Sharia justice in the UK.

As Tommy Robinson headed into court for his sentencing Thursday, he wore a t-shirt that read: “Convicted of Journalism.” And it’s true. Tommy Robinson is heading back to jail for doing what journalists routinely do: ask questions of defendants heading into courtrooms. The gaggle of establishment media journalists who peppered Tommy himself with questions as he entered the court have not been arrested.

British authorities claimed that Tommy Robinson had prejudiced the outcome of the trial of several members of a Muslim rape gang. This is arrant nonsense: the trial had been completed, and Tommy was asking them what they thought of their having been convicted. There was, however, a gag order on the proceedings, and it was on the basis of the claim that Tommy violated that gag order that he is now back in prison.

Why was the gag order put into place? The obvious reason is that the British government and law enforcement authorities are deeply embarrassed by their abysmal record in dealing with Muslim rape gangs. In just one city, Rotherham, British officials “described their nervousness about identifying the ethnic origins of perpetrators for fear of being thought as racist; others remembered clear direction from their managers not to do so.”

Nor did this happen only in Rotherham; all over the country, authorities let Muslim rape gangs run rampant for fear of being charged with “racism” and “Islamophobia” if they did anything about them. That is just what happened to Tommy Robinson when he dared to call attention to these gangs and the Islamic motivation behind their activities. The Muslim rape gangs went unreported, unprosecuted, and in general unstopped because of far-Left organizations including Hope Not Hate, Faith Matters, and Tell Mama, which waged relentless war against anyone and everyone who spoke out about this issue. They demonized as “Islamophobic,” “hateful” and “bigoted” anyone who said that there were Muslim rape gangs at all, and that they had to be stopped. They led the campaign to ban Pamela Geller and me from entering the country, when one of the events we had discussed going to was a rally against the Muslim rape gangs.

Hope Not Hate has scrubbed the evidence, but it used to be possible to search for “grooming” (as these gangs are usually called “grooming gangs” in the British media) at Hope Not Hate’s site. You would have seen that the vast majority of the articles mentioning this practice were attacking those who were calling attention to it and protesting against it.

The lives of tens of thousands of British girls are ruined today because of fascist “anti-hate” crusaders Nick Lowles and Matthew Collins of Hope Not Hate, Fiyaz Mughal of Faith Matters and Tell Mama, and their friends, supporters, and allies. Yet it is Tommy Robinson who is in prison. If Britain were even close to being a sane society today, Lowles, Mughal, and company, not Tommy Robinson, would be being subjected to scorching criticism, and there would be a thorough public reevaluation of how much the Left’s alliance with Islamic supremacism and smear campaign against foes of jihad terror has harmed the nation and its people.

But Britain is not a sane society today, and these sinister individuals — Lowles, Mughal, and the rest of them — continue to wield their considerable power and influence in British society. If Britain is ever to recover itself and stave off chaos, civil war and Sharia, Lowles, Collins, Mughal and others like them must be decisively repudiated and removed from all positions of influence, and their organizations exposed for what they are.

Instead, Tommy Robinson is back to jail, with a sentence that could be a death sentence at the hands of Muslim inmates who threatened and menaced him when he was in prison before.

The British government is clearly making an example of him in order to try to deter more Britons from protesting against its policies of mass Muslim immigration and its covering up of crimes perpetrated by Muslims in the name of Islam and in accord with its teachings. This conviction and sentencing shows not Tommy Robinson’s contempt of court, but the contempt of the British government for its own citizens, and particularly for the victims of Muslim rape gangs.

Britain has become a shabby little police state in which it is illegal to criticize Islam and mass Muslim migration in Britain today. Its death as a free society is by its own hand.