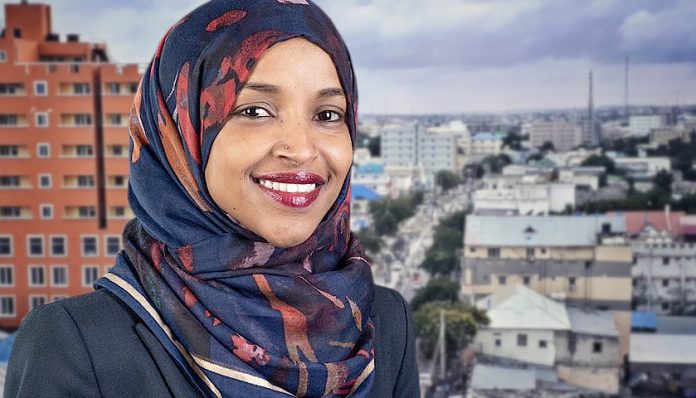 I am an immigrant.

I want Representative Ilhan Omar (D-Mogadishu) to go back to the shithole country she came from.

And I want her to stay there.

Omar hates white people. Omar hates Jews—and she is not shy about letting everyone know it (“It’s all about the Benjamins baby”). Omar hates our ally Israel (“Israel has hypnotized the world, may Allah awaken the people and help them see the evil doings of Israel”).

Maybe I missed a public statement where Omar praised America. But after looking through countless webpages and many gigabytes, I think I am on solid ground when I say: Ilhan Omar hates everything and everyone around her, except possibly her brother, whom she married, and perhaps the 9/11 terrorists who killed 3,000 people (“some people did something”—no biggie).

As an immigrant from the no-longer-with-us USSR, I believe I have as much moral authority as anyone to tell Omar: you should return to the country you represent and take up permanent residence there.

America can never measure up to Omar’s high standards—but no doubt Somalia will. Omar need not suffer in our land of toxic xenophobia, Islamophobia, racism, sexism, lookism and speciesism—because she can live out the rest of her life amidst the tolerance, understanding, and mutual respect that Somalis are famous for.

(For those interested, Somalia today is still a land mostly of anarchy, fundamentally not all that different from what you probably saw in “Black Hawk Down,” with a civil war, Islamic terrorists slaughtering civilians, corruption, hunger, poverty, torture, rape, refugee camps, and all the other usual things associated with that jewel of East Africa.)

This past week, President Trump once again detonated the brains of the Left, when he tweeted (without even naming names) that those who came here and enjoyed all the benefits of this country, but had nothing good to say about America, can go back to their original countries. The reaction from the Left was instantaneous and explosive: Racist! Sexist! Nativist! Islamophobe! Bad Man! Really Bad! Trump is Hitler! Trump is Mussolini! Trump is a Dictator! Trump is Satan! We hate Trump!

As an immigrant, I would like to tell Ilhan Omar: I love America. America gave my family and me opportunities I never would have had anywhere else. Unlike you, I am proud to call myself an American. America is incredible and special. My family has never asked for a handout—but what my parents and I have, we have because we grasped the opportunities offered and protected in our new country. For these opportunities, we are eternally grateful.

Twenty years ago, I went to the Vietnam War Memorial for the first time. Even though I didn’t immigrate to this country until 1978, five years after the Vietnam War ended, and even though I have no personal connection to any of the 58,212 names listed on the memorial, I felt the specialness of that place. The sacrifice of the men and women who fought and died for my country was worthy of the deepest respect and contemplation. I have no doubt that Omar, were she ever to go to the Vietnam War Memorial, would feel nothing.

As an immigrant, I can assure native-born Americans that Ilhan Omar does not speak for immigrants. Not for Russian-Jewish ones like me, not for (I am quite confident) Latinos, Asians or Europeans. Omar and the vitriol she constantly spews is not typical of immigrants who come here legally. So I salute President Trump for once again sticking a fork in the eye of the leftist PC crowd, and saying publicly what millions of people are thinking privately. Republicans agree with him. Independents agree with him. In fact, Trump just gave us all even more reasons to vote for him in 2020. And if Democrats don’t agree—who cares?

It is worth describing here a peculiar phenomenon that most Americans have never heard of, known to Jewish immigrants from the USSR by a mocking Russian word razocharovanty—“the disappointed ones.” These were people who had difficulty fitting in at the social level they were once used to—without passable English, the “careers” that were open to them were mostly at the bottom rungs of the economic ladder. And so the razocharovanty wanted to go back to the USSR. As Joe Biden would say, “no joke.”

They didn’t hate America, but they didn’t see themselves as part of the American future, either. They missed their motherland, warts and all—and with rose-colored glasses, the warts didn’t look so warty. Nostalgia isn’t rational—it’s an emotion that exists outside rationality.

And then, miraculously, they got their wish! As a propaganda ploy, the Soviet government permitted the razocharovanty to return! They even chartered a plane to take them back—all roughly 200 of them. The Soviet state restored their pensions (maybe $50 a month in those days) and gave them apartments to live in (no small thing, in a land of socialist scarcity where the government devoted all its energies to building tanks and missiles).

Within months, almost all of the razocharovanty were back in Brooklyn. Spending time in the Soviet Union was the single best way to cure nostalgia. America, suddenly, looked better than ever.

And this brings us back to the heroine of our current events. I want to add my voice to President Trump’s recommendation: Dear Ilhan Omar, you should go back to Somalia. Forever. America’s freedoms are my freedoms—but you care nothing for them. America’s enemies are my enemies—but you think more highly of them than you think of your fellow citizens. America’s allies are my allies—but you hate our allies. America’s heroes are my heroes—but nothing they ever fought and died for, you find heroic or even worthy of a mention. America’s history is something I read and study—but you find nothing there to be proud of.

Ilhan Omar, when you go back to Somalia, we won’t miss you.