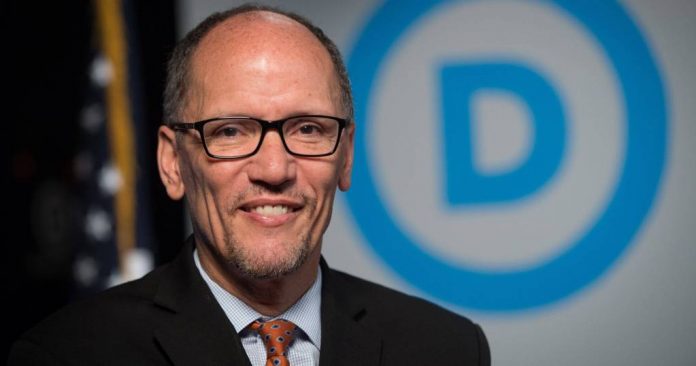 Democrats care about evangelical voters like they care about babies. They’ll kiss us at their rallies, but secretly, wouldn’t care if we dropped dead. But that isn’t stopping the Democratic National Committee (DNC) from appointing a pastor to a new spot within the party to help them with the evangelical vote in 2020. After Hillary Clinton lost the 2016 election, in which she ignored evangelicals altogether, the DNC has learned their lesson. But who is this man chosen to convince America’s evangelicals to vote like the devil?

Derrick Harkins is a senior vice president at Union Theological Seminary in New York. Union is the oldest seminary in the United States, and is now best known for its “progressive Christianity” and was founded by the Presbyterian Church U.S.A. Union Seminary is also the birthplace of Black Liberation Theology, the heresies founded by James Cone, which are now taught as far and wide as Southeastern Baptist Theological Seminary in the Southern Baptist Convention.

Harkins had also previously served in the Department of Faith Outreach for the DNC up until 2012 when the party scuttled the program in the run-up to the 2016 election when the Clinton camp became convinced that evangelicals were no longer a powerful voting block. The DNC is bringing back Harkins to again infiltrate America’s churches with a message of religious leftism after rural evangelicals pushed Trump over the finish line in 2016.

Sounding like he works for The Gospel Coalition, one of Harkins’ bios said of him, “[Harkins] is leaving his flock and his city for a different kind of social justice ministry.“

Harkins has also served as Vice President of the North American Baptist Fellowship of the Baptist World Alliance and has been a guest lecturer on social justice at Bucknell, Cornell, Iona College, and Harvard’s Kennedy School of Government. Like the Southern Baptist ERLC’s Russell Moore, Harkins works for “comprehensive immigration reform” with Jim Wallis and is on the Board of Directors for Sojourners (Moore also serves with Wallis on the Evangelical Immigration Table).

Shortly after being hired by the DNC only a few weeks ago, Hawkins organized roundtables with progressive “faith leaders” and high-ranking members of the DNC. Taking part was the CEO of the Union of Affirming Christians, representatives of Islam, Sikhism, Coptic Christianity, and the LDS. They met with the top dog in the DNC, party chairman, Tom Perez.

Helping with Harkins’ efforts to win over evangelical voters for the DNC is Paul Raushenbush, the Senior Vice President of Auburn Seminary, former Huffington Post religion column executive editor, and editor of BeliefNet. Rauschenbush is also the son of Walter Rauschenbusch (Paul began to spell his own surname differently), who was the chief proponent and main progenitor of Social Gospel.

Raushenbush took part in the DNC-evangelical brainstorming session and told the press, “It wasn’t a token thing. It was serious listening and respect.”

Rauschenbush claimed, “We’re not going to be co-opted by any political party, but we do recognize that elections have consequences for the morality and the values that we held dear.”

The Social Justice pastors gathering with the DNC claimed that their path to victory was mapped out in Doug Jones’ victory over Roy Moore in Alabama in 2017. The pastors claimed that Moore’s loss was caused by a surge in votes from religious African Americans. If only liberal or left-leaning evangelicals could be mobilized in 2020, they feel, Democrats could win in a landslide.

Simultaneously, in Reformed Evangelicalism, Social Justice has become all the rage. The Southern Baptist Convention’s Ethics and Religious Liberty Commission helps to run the Evangelical Immigration Table, which is financially funded and founded by George Soros’ National Immigration Forum. James Riady, the former Clinton ‘money man’ who was kicked out by the State Department after pleading guilty to using foreign cash to affect our political process, is a major financial donor to Reformed Theological Seminary, Westminster Philadelphia, and The Gospel Coalition.

More conservative Christians are starting to realize that the advance of so-called “Social Justice” into evangelicalism is little more than a political operation of the Democratic Party.