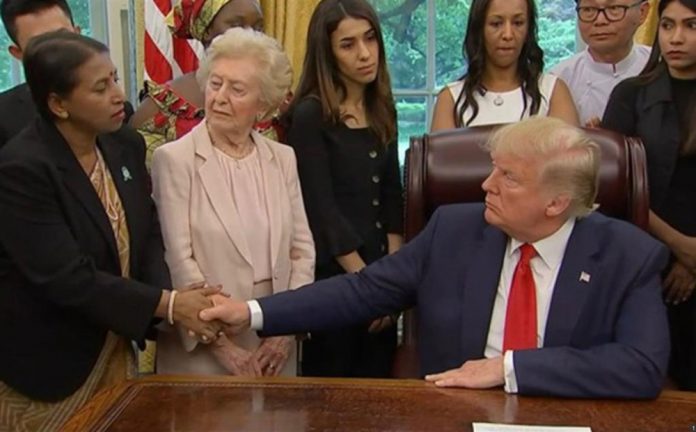 On July 17th, President Trump met with more than two dozen survivors of religious conflicts, including victims from Iraq, Tibet, China and Bangladesh.  Several individuals stepped forward at the Second Ministerial to Advance Religious Freedom to tell their stories in hopes of informing him and gaining a commitment for intervention.

Among them was Priya Saha, an officer with the Bangladesh Hindu Buddhist Christian Unity Council (BHBCUC), who was determined to obtain Trump’s assistance with the dire situation faced by minorities in her country.  She testified that since Bangladesh became independent in 1972 and Islam was declared the state religion five years later, non-Muslims have had their land confiscated and, among other atrocities, have been raped and murdered.  Millions of people have disappeared or have fled the country, she said.

As a result of her testimony, the government threatened Saha with sedition charges, angry mobs demonstrated outside her home, she and her family have been targeted on social media and she was expelled from the council.  All this occurred in a Muslim country which claims to observe religious freedoms and declares that all faiths live in harmony.

As the former organization secretary for the non-profit BHBCUC, Saha is well-versed in the problems resulting from the infringement of minority rights in Bangladesh.  The organization was established  in 1988 to protect the rights of religious and ethnic minorities in the country after Islam was instituted as the state religion by constitutional amendment in 1977.  Secularismhad originally been a fundamental principle of Bangladesh’s 1972 Constitution.  But this founding principle was altered by then-President, Ziaur Rahman, who replaced the non-sectarian text with a commitment to the “absolute trust and faith in Almighty Allah.”  Over the years, many challenges arose against the constitutional amendment amid calls for Bangladesh to return to secularism.  All have been rejected and Islam remains as the official state religion.

During her brief visit with President Trump, Saha’s goal was to call attention to the religious cleansing of minorities that began at the time of independence and is still very much in existence today.  In 1947, Hindus made up 31% of the population.  Today, they represent approximately 9%.  What’s more is that minorities have been dispossessed of over 3 million acres of land by the discriminatory statute used against non-Muslims, the Vested Property Act of 1972, which allows the government to confiscate property from individuals deemed “enemies of the state.”  Since independence, minorities have been subjected to atrocities such as rape and murder and many have fled the country.  Underrepresentation in the military, police and government services further disenfranchise those that remain.

Saha, who has been fiercely committed to improving the situation for minorities in Bangladesh, told Trump that 37 million Hindu, Buddhist and Christian citizens have disappeared.  She assured him that they were not seeking refugee status but needed his help in stopping the atrocities.  She described her own experience when her house was burned down and her land confiscated by Muslim fundamentalist groups.

To support her assertions, Priya Saha produced reports on the instances of minority human rights violations in 2016 and 2017.  With each incident impacting multiple persons, entire families or organizations, tens of thousands of victims could be affected, she said.  Human rights violations include murder; physical assaults; attacks on homes, businesses and property; land-grabbing and arbitrary evictions; desecration of religious sites and temples; rapes; kidnappings; and forced religious conversions and beef consumption.  Saha reported close to 1,500 incidents in 2016, which amounted to 5.5 times the number of violations reported the previous year.  For 2017, she cited just over 1,000 instances of communal violence against non-Muslims.  In some cases, victims have accused the police of participating or turning a blind eye to the attacks and shirking their duty to provide security and make arrests.  Prosecutions are difficult as witnesses are afraid to appear in court and Muslim perpetrators are rarely apprehended and brought to justice.  Thus, the organized attacks on powerless minorities continue.

In a follow-up video to her meeting with the president, Saha elaborated on the problems facing Bangladesh minorities.  She referenced post-election violence in 1989, 1992 and 2001, in which minorities were attacked.  She explained how the Jamat-e-Islami, a violent, Islamic nationalist group, forcibly occupied 300 acres of her family’s land, stole crops, removed top soil and emptied ponds of fish.

After a video of her appearance at the White House went viral, Saha and her family are facing serious repercussions.  A mob showed up in front of her home and tried to break in despite the presence of a security guard.  Her family members are being identified, targeted and their photos constantly circulated on social media. A video of a Bengali Muslim performing a song that calls for Saha to be burned alive was circulated for a time on all social media platforms before being removed.

Saha was expelled from her position at the Hindu Buddhist Christian Unity Council which accused her of spouting “false, baseless and motivated figures about disappearances of religious minorities from Bangladesh and humiliating the image of Bangladesh.”  The ruling Awami League general secretary threatened to interrogate her after she returned home for espousing “imaginary” information.  The Awami League political party is closely allied with the Bangladesh National Party and Jamaat e-Islami, a right-wing Muslim nationalist movement which, like the Muslim Brotherhood, seeks to establish an Islamic society and was banned from Bangladesh elections as “unfit.” Together, the League and Jamaat e-Islami conspire to attack non-Muslim communities.

Further, ten sedition cases were filed against Saha in different districts for making comments “against the state.”  The Ministry of Foreign Affairs condemned her “blatant lies” and proclaimed that “Bangladesh is a beacon of religious freedom and communal harmony, where people of all faiths have been living in peace for ages.”

However, Bangladesh Prime Minister, Sheikh Hasina’s response was more reasoned.  Hasina moved against filing sedition charges pending a better understanding of Saha’s statements.  The Prime Minister has been trying to fight radicalism and walks the delicate line of proving her allegiance to the Muslim majority while trying to keep minorities safe.  Although the situation has improved under her regime, the Muslim majority is not in favor of secularism and democracy and believes that Islam is the desired faith for everyone.

Priya Saha’s attendance at the State Department religious freedom conference and her forthright statements about suffering minorities in Bangladesh testify to her bravery in the face of threats.  Hopefully, she will not be punished for her courage and will be able to make a difference in the lives of the country’s long-suffering non-Muslim citizens.