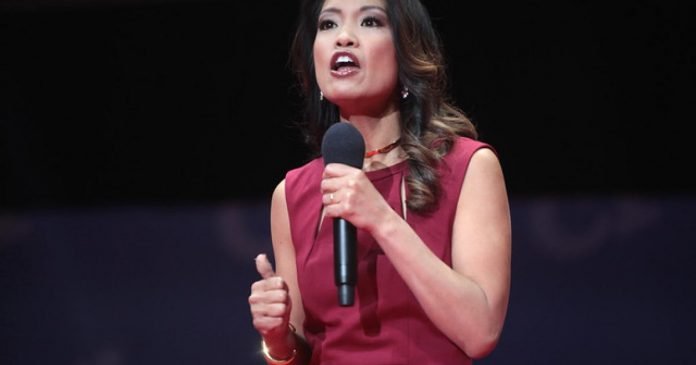 Michelle Malkin has joined other conservative commentators such as Rush Limbaugh in attacking “red flag” laws.

Under these laws, which are already in effect in numerous states such as Connecticut and Maryland, law enforcement can preemptively confiscate people’s guns simply for being considered a “threat.”

Republican leaders such as Donald Trump and Lindsey Graham have endorsed such legislation.

However, Malkin was quick to remind Republicans who want to brashly undermine their constituents’ right to bear arms how “Veterans Affairs recklessly red-flags “disruptive” citizens without due process, transparency or accountability in the name of “safety.””

She reveals that the VA has a policy “on “patient record flags,” federal bureaucrats can classify vets as “threats” based on assessments of their “difficult,” “annoying” and “noncompliant” behavior.”

Malkin reports that the flags “are used to alert Veterans Health Administration medical staff and employees of patients whose behavior and characteristics may pose a threat either to their safety, the safety of other patients, or compromise the delivery of quality health care.”

The conservative commentator highlighted the case of disabled Air Force veteran Benjamin Krause who “exposed the Soviet-style targeting of veterans flagged for exercising their First Amendment rights or threatening to sue the VA over neglectful care or for simply being too “expensive.”

Krause described this policy as “straight out of a totalitarian regime.” In fact, the VA inspector general came to the conclusion in 2013 that the agency “does not have a comprehensive definition of what constitutes disruptive behavior.”

Malkin also highlighted how veterans don’t have many due process mechanisms in combatting this abuse from the VA:

In January 2018, a VA Office of Inspector General report found that large numbers of flagged veterans were being left in the dark about being placed on dangerous patient lists—with no recourse to remove phony flags or appeal in any meaningful way.

For 25 percent of the medical records reviewed, the OIG “found no evidence that patients were informed they had the right to request to amend or appeal” special orders that restricted the care of flagged patients.

Krause concedes that there are veterans in the VA system who may be actual threats. However, Krause explains at DisabledVeterans.org that the “problem with the process is that it is secret.” He added, “The review process is done in secret and the veteran will not know who sat on the committee or what the evidence presented was prior to the decision. Only after the decision is made are veterans informed of the outcome and given a chance to appeal the vague allegations. That seems like a due process violation if I have ever seen one.”

Malkin finished off by noting the long-term implications of what red flag policies could mean for America’s gun owners:

If such tyranny is allowed among those who volunteered to protect and serve our country in the name of safety, imagine how it will be implemented among the law-abiding, gun-owning general populace. [emphasis added]

Republican elected officials who are desperate “to do something” should take note.