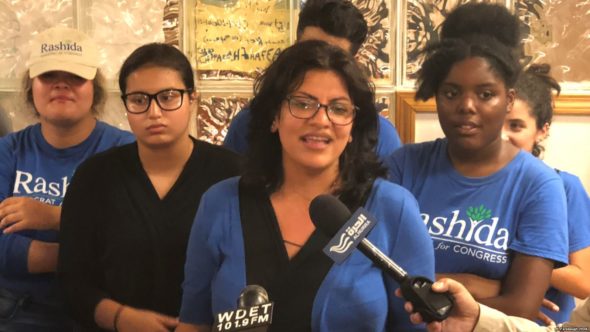 No, Representative Tlaib, when two Palestinian savages stabbed to death five members of the Jewish Fogel family in their home in 2011, including an 11-year-old, a 3-year-old, and a little baby only 3 months old, they were not “human rights activists.” That is called terrorism, even though the murderous Palestinian Authority (PA) will pay to the families of the two killers a monthly stipend of $3,200 each as long as they remain jailed in an Israeli prison.

What about the Palestinian savage who fatally stabbed Ari Fuld, a dual U.S.-Israeli citizen, father of four and grandson of a Holocaust survivor, one day in 2018 when he was out shopping? That savage, another Palestinian from a village near Hebron, was shot by the heroic Fuld before he himself collapsed, but his family will be receiving around $400 a month from the ever-generous Palestinian Authority while he spends the rest of his life in jail. Then there was Omar al-Abed, who stabbed a Jewish father and two of his children to death and seriously injured his wife in a July 2017 attack.  The PA will be paying his family $3,120/month as a reward for that depravity.

These payments are nothing less than incitement to murder and terror. Thankfully, the Taylor-Force Act passed the U.S. Congress in March 2018 and will halt U.S. funding to the PA until it stops paying Palestinian killers and their families for heinous acts of pure evil. But given the depth of the hatred spewed by Palestinian terrorists and their official HAMAS and PA enablers, who vow to continue the payments anyway, that may not be enough.

Unfortunately, it is the Iranian-regime-funded HAMAS, PA, and Palestinian Islamic Jihad (PIJ)—and those who insist upon funding them through the United Nations Relief and Works Agency (UNRWA) and other programs—that poison the minds of young Palestinians from the earliest ages, teaching them that Islam holds  it  glorious to murder Jews because they are Jews, an act they are told will earn them Allah’s approval and eternal reward (on top of those payments to their families). That is called Islamic supremacy, Rep. Tlaib.

When a Palestinian suicide bomber detonated his shrapnel-laden explosives inside a Sbarro Pizza shop in 2001, killing mothers, fathers, and children, maybe that wasn’t terrorism either? Or when a HAMAS suicide bomber massacred 30 innocent people and injured 140 in the 2002 Passover attack at the Park Hotel in Netanya, he was just trying to promote human rights? No, the Palestinian savages responsible for those atrocities thought they were going to be shaheeds, rewarded with the 72 virgins in paradise that Islam promises to such monsters. They might even get to have a park, school, or street named after them, to inspire future generations to more such depravity.

Until the Palestinians, whether it’s HAMAS and PIJ in Gaza or the PA in Ramallah, stop running children’s summer camps and TV programming that teach young Palestinians genocidal Jew-hatred and provide the paramilitary training to act out that hatred, there will never be peace in the Middle East. But, although her parents were immigrants from Jerusalem and the West Bank, Rashida Tlaib (D-Michigan) herself was born and raised in the United States. She graduated from Detroit, Michigan public schools. We Americans obviously have some work to do right here at home: what kind of education at home, in madrassa, mosque, or public school turned out a graduate imbued with such hatred as Tlaib’s? Unless we root out the inculcation of such Jew-hatred and glorification of Islamic terror right here in the USA, there will be more like her, possibly even in the U.S. Congress.

Murder of innocent human beings just because they are Jews is not human rights activism, Representative Tlaib. It is a despicable crime against humanity called terrorism.