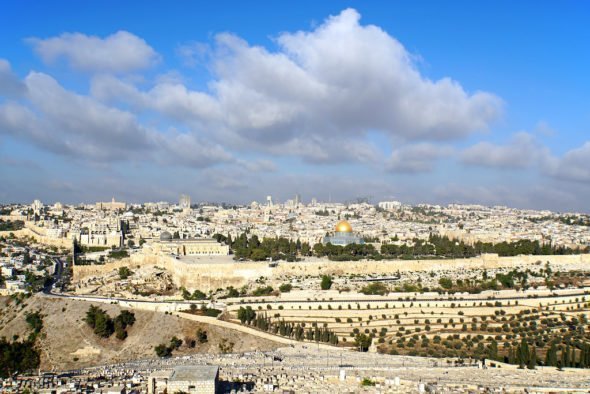 The Center’s Vice President for Research and Analysis, Clare M. Lopez, traveled to Israel in late May-early June 2019 on a fact-finding trip with Tom Trento and the United West team, guided in-country by Roni Wexler and Heritage Tours. With a theme of ‘Borders and How Security is Done,’ the group of some sixty travelers visited the dividing lines along the entirety of Israel’s perimeter with Egypt, Gaza, the Golan Heights, Jordan, and Lebanon. The group saw in each location how Israel protects its people and its sovereignty from the existential threats that confront them on all sides. Sometimes it was with concrete barriers, sometimes ‘smart fencing,’ and always with the most advanced technology and capable intelligence to be found anywhere in the region.

Lessons learned in these specific, perhaps unique, locations nevertheless hold relevance for the United States (U.S.) as well as any other nation state that values its sovereign independence. As former Israeli Ambassador Yoram Ettinger wrote recently with tremendous insight, “Israel’s defensible borders should not be based on well-meaning peaceful co-existence (best case) scenarios” because “Defensible borders are not based on a state-of-peace: defensible borders, in the Middle East, should be able to overcome an abrupt violation of a state-of-peace.” He concluded: “The most critical feature of defensible borders in the Middle East is their capability to fend off realistic (worst-case) scenarios.”

With that tough-minded warning in mind, our Israel tour group began at the northern end of Israel’s border with the Gaza Strip. Because of the constant barrage of automatic rifle fire, missiles, rockets, and other projectiles launched from Gaza at Israeli communities by the Islamic terror group, HAMAS, Israel has constructed at this point a serious concrete wall, backed up by a wire mesh fence topped with concertina wire. There is also a busy border crossing here at Kerem Shalom, through which tons of humanitarian aid, produce, and products of every kind pass every day—subject, of course, to careful inspection for dual use items and the lethal weaponry that Iran and others attempt to smuggle into and out of Gaza, intended for attacks against Israeli citizens.

The next stop brought us to the southern end of the Gaza Strip, where the borders of Egypt and Israel meet with it. Here, our briefer explained that Israel used to have an illegal immigrant problem with would-be migrants from Africa trying to sneak into Israel, mainly looking for jobs. In 2013, Israel constructed a long double line of fencing along its border with Egypt: on the Egyptian side, the fence is electrified and on the Israeli side, it is ‘smart fencing,’ which is wire mesh embedded with sensors that warn of any approach near it. Watch towers are constructed up and down the line and nearby units of Israeli Border Police remain on the alert; but since this fencing went up, Israel’s illegal immigrant problem from Africa has been cut essentially to zero.

Our journey next turned northward, towards Judea and Samaria, where two high ridge lines run north-south: the Judean mountains and the Samarian Ridge. Standing on those highlands and seeing how close we are to the most important Israeli cities – Haifa, Herzliya, Tel Aviv, Ashdod, Ashkelon – that run up and down the Mediterranean coast, really brings home in a startling way how important it is that Israel always maintain control on those heights. As U.S. Navy Admiral James Wilson ‘Bud’ Nance, former Staff Director of the U.S. Senate Foreign Relations Committee, once said, “The West Bank is the prime strategic real estate in the area. Without the West Bank, most of the major population and industrial centers of Israel are easily within artillery range…”.

Echoing Admiral Nance’s observation, the great Israeli statesman Abba Eben likewise noted that the pre-1967 Six Day War ‘borders’ are actually armistice lines, from after Israel’s 1948 War of Independence. He explained that “the map will never be the same as on June 4, 1967. For us, this is a matter of security and principles. The June [1967] map is for us equivalent to insecurity and danger. I do not exaggerate when I say that it has for us something of a memory of Auschwitz.”

Our group looked out over the Israeli farmlands below from the Samarian highlands at Alfei Menashe.

Next, our trusty tour bus drivers took us all the way north to the Lebanese border, where we stopped at the Kibbutz Misgav-Am, that had been established in 1945 and successfully defended in every defensive war Israel has ever had to fight since. Its location between Lebanon to the west and the Golan Heights to the east explains just how strategic a site this kibbutz is for the defense of Israel.

Close to the Kibbutz Misgav-Am is the northernmost Israeli town of all: Matula. Looking through the mesh wire smart fencing dividing it from Lebanon (aka Hizballah-land), we could see a yellow Hizballah flag flying. Our briefers told us that every home north of the Israeli border all the way to the Litani River in Lebanon has been fitted out with a missile launch room—within people’s homes. Some of those homes also are the starting point for Hizballah tunnels dug deep under the earth and extending far into Israeli territory for the purpose of channeling Hizballah’s Shi’ite jihadis into Israeli towns to kidnap and kill. Yes, of course, the use of any civilian structure as a military installation violates international law. But Hizballah dominates the Lebanese government and even though U.S. Secretary of State Mike Pompeo has explicitly denounced Hizballah activity in Lebanon, the Trump administration clings to the fiction that Tripoli is an independent actor and provides extensive military aid to it.

The Golan Heights was our next destination, with its amazing view of Israel below, all the way to the Mediterranean Sea. The most disturbing feature of that site was the now rusted and empty gunners’ bunkers, from which Syrian troops used to train machine gun fire down on the defenseless Israeli farms and towns below.

The Valley of Tears is the site of an incredible 4-day tank battle that took place on the Golan Heights during the 1973 Yom Kippur War. A mere few dozen Israeli tank commanders held off a far larger Syrian APC, artillery, and tank force in a courageous engagement that saved Israel from existential defeat.

Driving southward along the Jordan River, we saw again the kind of smart fencing that protects Israel’s borders elsewhere. A moving ceremony where we planted a tree on the banks of the Jordan River was dedicated to the memory of Aaron Vaughn and his teammates, fallen members of SEAL Team Six, who lost their lives in August 2011 in Afghanistan when the Taliban shot down Extortion 17, their transport helicopter.

Arriving finally in the storied city of Jerusalem, we saw walls both ancient and modern.

Some final thoughts: clearly defined and well-defended borders are the front-line defense of the sovereign nation state. For a small country like Israel, surrounded on every side by enemies that have attacked it repeatedly since the very day of its modern establishment, defensible borders are critical to the continued survival of the Jewish people. As we saw, there are multiple and varied ways that national borders may be protected—and as retired IDF Colonel Dan Tirza told me in our interview in Jerusalem, only a scant 5% of Israel’s 451 miles of border is defended with high concrete slab walls. The rest of it, whose construction he directed, is smart fencing.

There are lessons here that we Americans might well learn from.