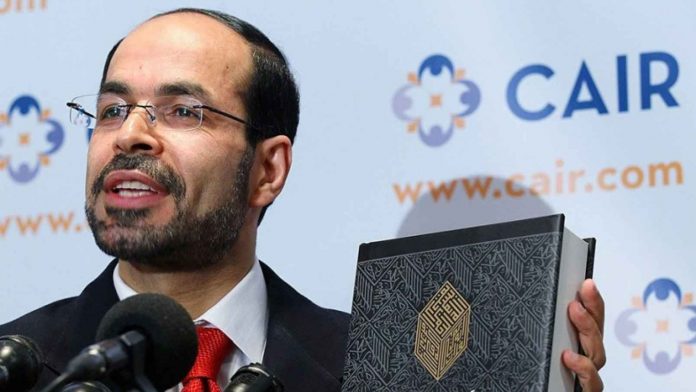 The terrorist-linked group goes from influencing the War College to influencing Congress.

The “all-seeing eye” and multi-tentacled reach of CAIR is again on display, signifying just how intrusive this terrorist-linked Islamic organization that poses as a civil rights group has become in the U.S.’s efforts to defend itself against terrorism.

As previously noted, after inviting me to lecture on my recent book on the military history between Islam and the West, the US Army War College (USAWC) reneged because CAIR cried “Islamophobia” and “racism.”  In response, the office of Congressman Scott Perry—a graduate of the USAWC, which falls under his PA district—drafted a letter that was signed by nine other congressmen and delivered to the Commandant of the USAWC, John Kem.

The letter expressed the signatories’ “grave concern” that the USAWC “capitulated to the unfounded claims of CAIR, and thus damaged the academic freedom and integrity of the high esteem in which the USAWC is held by many around the world….  Not only are we hearing from constituents—military and civilian—on this issue, but we’re extremely disappointed in the decision to cancel Mr. Ibrahim and his voice on a critical, current issue in our Nation.” (Read the complete here).

While the congressional signatories are to be commended for questioning the USAWC’s acquiescence to CAIR, another question has arisen: why did only ten out of 435 members of congress—that is, 2.3 percent of America’s representatives—sign this otherwise rational letter of concern?

The only way for CAIR to have learned about the existence of an internal letter to congress is for a member of congress or their aides to share it with CAIR.  In other words, if nothing else, this demonstrates that CAIR’s agents are well entrenched in congress (which of course should be no surprise considering that CAIR’s members/allies are not just aids but actual members of congress, a la Ilhan Omar, Rashida Tlaib, et al).

On behalf of the Council on American-Islamic Relations (CAIR) … I am writing to warn you of a factually-incorrect congressional letter to the U.S. Army War College being led by Representative Scott Perry.

The letter encourages the War College to reinstate a speaker, Raymond Ibrahim, who promotes a false and vitriolic view of Islam…

Attached and copied below, please find a factsheet detailing various statements by Ibrahim that demonstrate his views on Islam…

As might be expected, this same Liam Foskett apparently attended renowned apologist-for-Islamic-terror extraordinaire, Georgetown University, making him an ideal non-Muslim employee (or useful idiot) for CAIR.  (That said, fortunately for him his arrest record for possession of alcohol as a minor occurred in the U.S., not under the  culture which CAIR is devoted to whitewashing, and where such haram shenenagins are not well tolerated.)

CAIR’s attached and pasted document is titled, “Backgrounder: Raymond Ibrahim.”  After boasting how CAIR and allies got the USAWC to cave in to their demands, it complains that “Representative Scott Perry is now leading a letter in Congress calling on the college to reinvite Ibrahim. The letter also makes the completely false claim that CAIR has ties to Hamas and the Muslim Brotherhood.”

You be the judge if the assertion that CAIR is connected to Hamas and the Muslim Brotherhood is “completely false” (see here, here, here, and here; then do your own research/googling for much more).  As Perry notes in the letter to the USAWC, these are the reasons why “our ally, the United Arab Emirates has designated CAIR a terrorist group.”

Even more tellingly, CAIR doesn’t bother acknowledging or denying the absolute worst charge in Perry’s letter, that “CAIR is named by the Department of Justice as an ‘unindicted co-conspirator’ in the 2007 terrorist funding case against the Holy Land Foundation.”

In other words, terrorist-linked CAIR strains at gnats while expecting members of congress to swallow camels.

The rest of CAIR’s “backgrounder”  concerning my purported “Islamophobic” tendencies consists of random quotes I’ve made over the last 15 or so years and is meant “to give a better idea of Ibrahim and his views and to discourage signing Representative Perry’s letter.”  In another article I may parse through these quotes, all of which I still stand by.  For now, note how, as with its earlier attacks on me, CAIR does not mind misrepresenting my position to make its “backgrounder” points.  It quotes me saying:

When Muslim migrants go on church-vandalizing sprees in the West – many hundreds of churches, crosses, and Christian statues have been respectively desecrated, broken, and beheaded in just Germany, France, and Austria – very few understand that this modus operandi stretches back to and has been on continuous display since Islam’s first contact with Christian civilization.

I did not end that sentence with the word “civilization.”  The complete sentence, which appears at the very end of my book, Sword and Scimitar—which is at the center of CAIR’s offensive—reads “…this modus operandi stretches back to and has been on continuous display since Islam’s first contact with Christian civilization, as recounted in the preceding history.”

CAIR clearly does not want members of congress to realize that there is an actual, documented history that can be consulted against my “controversial” words.  Accordingly, in its willful suppression of this fact, not only does CAIR not reproduce my six final words; it fails to indicate their omission with ellipses, as required by the rules of grammatical etiquette.

Be all this as it may, the fact remains: having successfully cowed the US Army War College into obedience with its hysteria and cries of “racism,” one can only guess just how many members of congress CAIR also cowed from signing Rep. Scott Perry’s letter in defense of free speech and academic inquiry in the context of U.S. security.

Such is the extent of CAIR’s tentacles, the extent of the propaganda-jihad—one of many, legitimate forms of nonviolent jihad—at its finest.