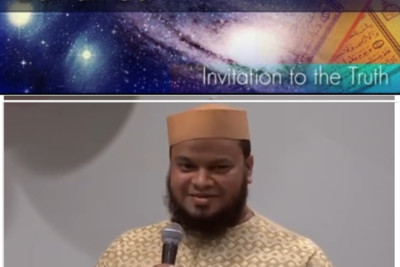 We see this time and time again. Dawah (proselyting) and taqiya (lying to advance Islam) – like the Ground Zero mosque imam Rauf and his third wife Daisy.

Muhammad Shahidullah is a man of seeming contradictions.

An imam, he is active in interfaith outreach, speaking to the New York Police Department and visiting the White House in April as part of an interfaith delegation. In December 2017, he participated in an interfaith event organized at New York’s 9/11 Tribute Museum, attended the United Nations World Interfaith Harmony Week a year earlier, and has been recognized in a New York City Council citation as “an outstanding citizen, one whom is worthy of the esteem of both our community and the great City of New York.”

BUT SHAHIDULLAH ALSO RUNS A PROSELYTIZING WEBSITE, DAWAH USA, THAT OSTENSIBLY SEEKS TO INVITE PEOPLE TO ISLAM BUT IN FACT SERVES AS A CLEARING HOUSE FOR EXTREMIST AND ISLAMIST PROPAGANDA, THE INVESTIGATIVE PROJECT ON TERRORISM FINDS.

Tax records for the New York-based Dawah USA Inc. show that it is registered as doing business as the Interfaith Center USA. Shahidullah, a Bangladeshi native who lives in Queens, New York’s Jamaica neighborhood, serves as president of both organizations.

The perception the West is waging a war against Islam has been one of the most effective messages in radicalizing Muslims. Though he was killed in a 2011 U.S. drone strike, Awlaki remains one of the most influential voices in online radicalization.

Dawah USA also features speeches by Ali al-Timimi, the spiritual leader of the Virginia Jihad Network, a group of 11 men who wanted to train for jihad against U.S. forces after 9/11 with the Lashkar-e-Taiba terrorist group.

In an audio, “Political Revival of the Ummah,” al-Timimi explains the role of politics for Muslim minorities living in a non-Islamic society. He cites Islamic scholar Abdurahman bin Nasir bin Sa’adi saying, “And when he [Sheikh bin Sa’adi] talks about Muslims living in a non-Muslim society and he says that if Muslims live in a non-Muslim society … then they could make the country Islamic themselves.”

Speeches by al-Timimi’s mentor Abu Ameenah Bilal Philips, a Canadian-raised Salafist currently living in Qatar, also are posted on Dawah USA. Philips has been banned from several countries, including the United States, for his extremist teachings. He is against the “concept of globalized western civilization as portrayed in secular democracy … being pushed down the throats of the rest of the world” and condemned homosexuality as punishable by death.

Several recordings by Indian hate preacher Zakir Naik, whose inflammatory speeches have inspiredMuslim youth to engage in terrorist acts, also appear on Dawah USA. Naik, who claimed 9/11 was an “inside job,” faces money laundering charges in India moved to Malaysia in 2017.

According to his official profile, Ahmad spent 40 years “not only in reviving the Qur’an-centered Islamic perennial philosophy and world-view but also reforming the society in a practical way with the ultimate objective of establishing a true Islamic State, or the System of Khilafah [Caliphate].”

An e-book available on Dawah USA by South Asian Islamist ideologue Maulana Syed Abdul Ala Maududi, Towards Understanding Islam, defines jihad “in the language of the Shari’ah [Islamic Law]” as “a war that is waged solely in the name of Allah against those who practise [sic] oppression as enemies of Islam.”

“If the country attacked has not enough strength to fight back, then it is the religious duty of the neighbouring Muslim countries to help her; if even they fail, then the Muslims of the whole world must fight the common enemy. In all such cases, Jihad is as much a primary duty of the Muslims concerned as are the daily prayers or fasting.”

Shahidullah ‘s Dawah USA also features an undated, anonymous article, “Why does Islam degrade women by keeping them behind the veil?,” which argues that Islam and Muslim modesty culture offers a solution to reducing rapes in America.

“Consider a scenario where the Islamic hijaab is followed in America. Whenever a man looks at a woman and any brazen or unashamed thought comes to his mind, he lowers his gaze. Every woman wears the Islamic hijaab, that is the complete body is covered except the face and the hands upto [sic] the wrist. After this if any man commits rape he is given capital punishment. I ask you, in such a scenario, will the rate of rape in America increase, will it remain the same, or will it decrease?”

It is nearly identical to a 2015 article by Shadab Akram published by Quora.

The notion that Western values empower women is false, the article further claims. “Western talk of women’s liberalization is nothing but a disguised form of exploitation of her body, degradation of her soul, and deprivation of her honour. Western society claims to have ‘uplifted’ women. On the contrary it has actually degraded them to the status of concubines, mistresses and society butterflies who are mere tools in the hands of pleasure seekers and sex marketeers, hidden behind the colourful screen of ‘art’ and ‘culture’.”

An article, “Matters Which Nullify Ones Islaam,” on Shahidullah’s website denounces interfaith outreach as an “evil concept” contrary to Islam.

“It is impermissible for any Muslim who believes in Allaah as his Lord, Islaam as his religion and Muhammad … to call towards the evil concept of Interfaith, encourage it, facilitate its conveyance to the Muslims, attend its conventions or belong to any of its clubs or organizations,” it says. It concludes by advising Muslims “to protect the religion of Islaam, preserve the Islamic creed and protect it against the misguided people of falsehood and those who share their ideas and beliefs. They must be aware of ‘Interfaith’ and its traps.”

In addition to being Dawah USA’s president, Shahidullah is chairman of the board of ITV USA, which describes itself as “A Global Dawah Channel” seeking “to propagate the inherent love and peace that Islam embodies.” The TV channel features programs on Islamic theology by prominent American Islamist imams, including Zaid Shakir, Hamza Yusuf, Shaker Elsayed, Yasir Qadhi, and others.

MUNA has been described as “openly affiliated” with the Sunni revivalist movement Jamaat-e-Islami (JI) in a resolution introduced in February by U.S. Rep. Jim Banks, R-Ind., in the House Committee on Foreign Affairs.

The fact that a hard-core Islamist operating under the guise of an interfaith worker is embraced by law enforcement is concerning and highlights the rising danger from Islamist wolves masquerading in sheep’s clothing.

Chicago-Based Islamic Scholar on Coronavirus Pandemic: Muslims in the U.S. Should Arm Themselves

Nancy Pelosi: ‘Every Crisis’ Including Coronavirus Is an Opportunity to Advance Leftist Agenda