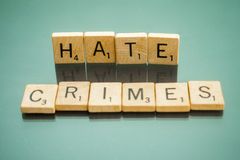 If you’re keeping score at home, here is where we are:

Being in or supporting the military = hate crime;

Being in or supporting law enforcement = hate crime;

Demanding equal enforcement of the law regardless of political affiliation = hate crime;

Questioning Democrats about their history or admissions of bigotry and hatred = hate crime;

Pointing out clear conflicts of interest and hypocrisy = hate crime;

Desiring to have the means to defend oneself from criminals, private and public = hate crime;

Saying or doing anything that does not lead to totalitarianism = hate crime.

All of these equations have something in common: thought is not allowed to occur between the activity and the hate-filled reaction.  That hate crimes are now so defined has become an absolute, undeniable certainty, like man-made climate change and transgenderism.  Pause for an instant to think otherwise, and you are damned for your hate-think.  The part of the society that controls media, entertainment, education, and messaging has made clear that it will not tolerate “haters” and that those holding disapproved opinions must suffer profoundly for their hatred.  They must be publicly exposed, ridiculed, shunned, and exiled with as much venom and hatred as trained puppets can possibly bring to bear, which is actually quite a lot for people who pretend to surrogacy for imaginary victims.  Eventually, someone will be physically attacked, and someone will probably die, whether it’s those who are attacked by the anarchists or those defending themselves from the genocide that is now openly, repeatedly urged.

This hysterical hate-fest has predictive similarities to the phenomena that occurred in Salem in 1692, in which imaginary evidence brought death sentences.  It is arguably an even more relevant example now, given the developments of the last few months, but in particular the last couple of weeks.  We have transitioned into a phase of hysteria like what occurred in Salem Village more than three centuries ago, but one that is magnified exponentially by the power of a media establishment that both creates and spreads the lies.  Back then, a select few, a powerful set of elite families holding and jealously guarding their power and influence, told lies to isolate and make examples of easy marks who had done nothing wrong.  This tactic both punished their foes and ensured that their fellow citizens remained terrified and pliant.  What started as baseless claims of imaginary misdeeds was quickly turned into undeniable acts of pure evil, committed invisibly, which were endlessly repeated and embellished until they were so undeniably true, and so terribly evil, that the death of innocent people was an inevitable solution.  In truth, the killing was allowed by the elites to protect their interests and avoid accountability for the disaster they themselves had created as a ruse to gain or consolidate power.  To pull it off, they were aided by the moral certainty of a population so manipulated, so mis-led and misinformed, that they enabled executions.  They allowed their neighbors to be murdered upon the assurance that it was for a “greater good,” which they allowed the elite to define for them.

Steadfast and moral family members and neighbors with the courage to speak up were themselves accused, imprisoned, and some killed.  You were either for eradicating imaginary evil with murder or subject to it yourself.  Back then, the control was only over a village, and one could try to move to another village to escape the insanity.  Now, however, the people driving the hysteria here have already poisoned most of the rest of the world.  The American part of the populace, the national character that has not yet surrendered or been conquered, is all that is left.  It is a lifeboat.

Unfortunately, Marxists know that the death of their opponents will eventually come to be seen by their believers as a reasonable option if they can successfully define them as so deplorable and so irredeemable that their complete removal, even by death, is what is necessary for the “greater good,” as the most evil among us now see fit to define it.  The Constitution and Bill of Rights were established to prevent even the seeds of such evil, but those have been overridden.  The anarchists choose not to be bound by the documents, because they recognize their effect in preventing authoritarian control and the wholesale destruction of their enemies, which they no longer even deny pursuing.  It is actually said and written now with complete impunity.

Those who subscribe to authoritarianism or support its advocates are being conditioned, per the unique pedigree and history of that movement, to accept that the physical assault and deaths of their resistant philosophical enemies is not only reasonable, but “morally” necessary.  Bill Ayers, president Obama’s mentor, foresaw this necessity long ago, when he told FBI informant Larry Grathwohl that the extermination of at least 25 million Americans who refused to conform would be necessary when Marxists succeeded in overthrowing capitalism.

A documented history of serial evil by those on the left is being hidden by expanding waves of false moral outrage over imaginary misdeeds that never happened.  For this, sooner or later, many innocent people are going to be hurt, and probably much worse.  It will be called justice, and the zealots who demanded it will applaud and scream for more.  Hatred has animated their past, and will shape their legacy.  It is all they have ever had, so is all they can ever offer.

It’s time to see true hatred clearly and stand up to it or be crushed by it.  There are no other options anymore.