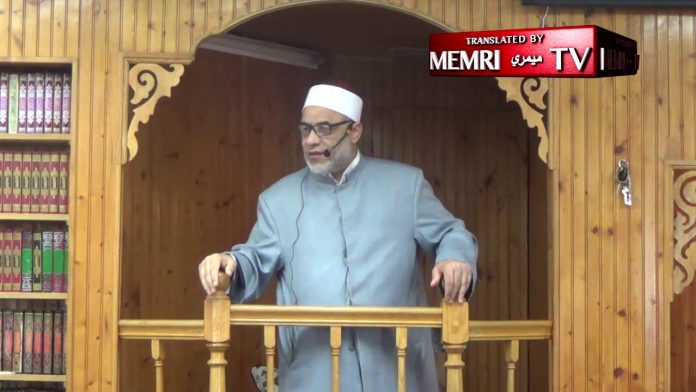 In a Friday sermon delivered at the Masjid Al-Huda Islamic Center in Minneapolis, Minnesota, on August 3, 2018, Sheikh Shaaban Aboubadria mocked women who “want to uncover their hair, wear makeup, and become a commodity.”

“Allah ordered [women] to cover up their beauty and not display it,” he said, berating men who allow their wives to do so: “When men turn into she-camels and stop performing their role, their wives go naked and all dolled up.”

Sheikh Aboubadria, who serves as the mosque’s imam, added: “Many men have no authority at home but over a single remote control.” In another Friday sermon, delivered at the mosque on March 30, Sheikh Aboubadria complained that in the West, which sends airplanes, tanks, and rockets to wipe cities out of existence, “they only care about dogs and cats, even though Man is the greatest of all creatures.”

In his April 27 sermon, he talked about interfaith marriage, saying that while Muslim men may marry non-Muslim women, “for her own good, a Muslim woman must marry only a Muslim man, because guardianship is in the hands of the man.” The sermons were published on the Masjid Al-Huda YouTube channel.

VIDEO-Stacey Abrams: ‘The Insurrection Is Continuing’ with Republican Voting Laws — ‘This Is Not Hyperbole’