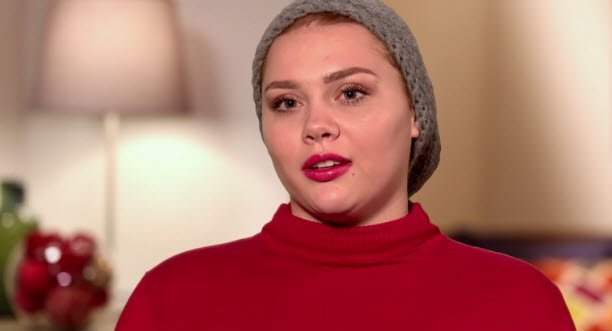 “I really make my own path.”

So said, according to Newsweek, the star of what is apparently another reality TV show, 90-Day Fiancé: “Columbus, Ohio, native Avery Mills,” who is featured on the show along with “her 24-year-old Syrian love, Omar Albakkaur.”

We are informed that Avery Mills is a strong, independent woman: “Avery, 19, left her faith as a Christian to become a follower of Islam—even though most of her family and friends objected. She joined a Muslim dating site soon after, which is how she met Omar.”

Newsweek goes on to say that “when viewers first meet” Avery, “she’s traveling to Lebanon with her mother to meet Omar for the first time. In a teaser for the new season, Avery gushes that he’s holding a woman’s hand for their first time. It’s up to Avery to decide if she wants to leave America—and all her family and friends—to be with her fiancé in a war-torn country.”

How romantic. What could possibly go wrong? Nothing but “Islamophobia,” as far as Avery Mills and Newsweek are concerned:

Avery’s story is sure to garner attention, but she doesn’t care about the negative things people have to say about her faith or her decision to marry Omar. “I have never cared about what people thought in the past. No one can sway my decision on my choices,” she told Newsweek in a phone interview. “I really make my own path and I’ll tell them that.”

Wonderful. But what will Avery Mills think, and what will she do, when she discovers that many Muslims do not believe that a woman should make her own path?

What is the Status of Women in the Quran and the Hadith? Three Factors to Consider

The Qur’an teaches that men are superior to women and should beat those from whom they “fear disobedience”: “Men have authority over women because Allah has made the one superior to the other, and because they spend their wealth to maintain them. Good women are obedient. They guard their unseen parts because Allah has guarded them. As for those from whom you fear disobedience, admonish them and send them to beds apart and beat them” (4:34).

It declares that a woman’s testimony is worth half that of a man: “Get two witnesses, out of your own men, and if there are not two men, then a man and two women, such as you choose, for witnesses, so that if one of them errs, the other can remind her” (2:282).

It rules that a son’s inheritance should be twice the size of that of a daughter: “Allah directs you as regards your children’s inheritance: to the male, a portion equal to that of two females” (4:11).

It allows for marriage to pre-pubescent girls, stipulating that Islamic divorce procedures “shall apply to those who have not yet menstruated” (65:4).

What’s more, a Muslim wife may not refuse sex. A hadith depicts Muhammad saying: “If a husband calls his wife to his bed [i.e. to have sexual relation] and she refuses and causes him to sleep in anger, the angels will curse her till morning” (Bukhari 4.54.460).

And: “By him in whose hand lies my life, a woman can not carry out the right of her Lord, till she carries out the right of her husband. And if he asks her to surrender herself [to him for sexual intercourse] she should not refuse him even if she is on a camel’s saddle” (Ibn Majah 1854).

Islamic law stipulates: “The husband may forbid his wife to leave the home…because of the hadith related by Bayhaqi that the Prophet…said, ‘It is not permissible for a woman who believes in Allah and the Last Day to allow someone into her husband’s house if he is opposed, or to go out of it if he is averse” (Reliance of the Traveller m10.4).

Avery Mills likely doesn’t know that Islam teaches any of these things, or that many Muslims believe them. Will she make her own path when she finds out?