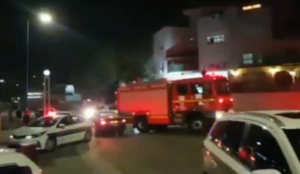 This is the kind of thing that Israelis have to endure on a daily basis. Then Rashida Tlaib and Ilhan Omar go before a misinformed and indifferent American public and a collaborationist establishment media and portray the “Palestinians” as innocent victims of unprovoked Israeli aggression. In reality, if the “Palestinians” stopped their genocidal incitement and attempts to murder Israelis, and expressed a sincere desire to make peace with the Jewish state, there would be peace. If Israel stopped defending itself against the “Palestinian” jihad, there would be a new genocide of the Jews.

The latest tit-for-tat fighting between Hamas and Israel continued throughout the night Thursday with Israeli planes striking a round of fresh targets in the Gaza Strip belonging to the terror group after a second rocket was fired from the coastal enclave toward Israeli towns.

The IDF confirmed that it has struck several “terror bases” in the Strip in the second set of sites targeted by airstrikes since midnight Wednesday.

The round of raids came in response to a rocket fired from the Gaza Strip toward Israel early Thursday morning, the IDF said. That attack came shortly after Israeli planes struck Hamas naval targets off the coast of the Strip, following an earlier rocket attack which landed in an open field in Israel….

An army statement added, “The IDF will continue to oppose attempts to harm Israeli civilians and considers the Hamas terrorist organization responsible for what happens in and out of the Gaza Strip. ”

Thursday morning’s rocket attack was the sixth rocket fired at Israel from the enclave in the past week. One rocket was fired at southern Israel on Friday night, followed by three on Saturday night Saturday. Three of these projectiles were intercepted by the Iron Dome anti-missile system. One rocket struck outside a home in the southern town of Sderot, causing light damage, but no physical injuries….