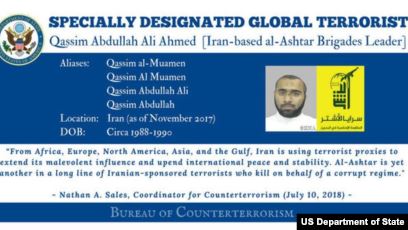 IN the main, folks with average intelligence recognize when something hinky is afoot. They may not realize what’s what, but, instinctively, they can smell a rat. You know, even a precocious middle schooler can sense when smoke is blown their way. Yes, as many parents, grandparents, and related authority figures have experienced, think of the countless times that you caught your young charges with a sideways smirk, or fielding an irritating eye roll or two in your direction, when they overhear or smell something that just doesn’t seem right. Fishy.

IN this regard, raise that ‘O RLY’ factor to the nth degree, and let’s see what shakes out of Tlaib’s (terror-tied) tree. As such, even when posed to the young and innocent, they, too, recognize that multiple names for one person, aliases, if you will, are not for nothing. Suspect.

BUT when it comes to those hooked-into Capitol Hill – the keepers of assorted national secrets, no less – well, little could be more dangerous. As evidenced below…..

TO wit, in the same way in which anti-American, anti-semitic, and terror enabling Rep. Omar has been exposed at these pages (and elsewhere, that is, by the non-captured media) for multiple criminal frauds, similarly, Rep. Tlaib has been caught with irrefutable tie-ins to Islamic Jihad.

IN fact, a major outing occurred in January 2019 – this site’s New Year’s ‘gift’ to millions of patriots. Indeed, “UPDATE TO: Trends/Adaptations In Jihadi Tactics, Intel Overview, 2018 To Date – The Rashida Tlaib Nexus” blew her cover!

THAT being established, is it ‘impolite’ or ‘impolitic’ to query: why the hell does Tlaib have multiple aliases, akin to her ex and countless in her less than six degrees of separation terrorist crew??

Tlaib has used multiple names over her career. Something that the average American would find puzzling. Between Tlaib and her ex, she has used so many names in documents and other forms of registrations (even after she was already married)? As you can see from the table below, some of these aren’t name reversals or alternate spellings –

Tlaib’s ex appears as well to have multiple personalities –

Just like her counterpart and sister in the squad, Ilhan Omar, who really is this person, Rashida Tlaib?

Why does she use multiple names and what sort of people is she hanging out with?

INCONTROVERTIBLY, for better or worse, the company one keeps is a mirror image to one’s worldview. Ipso facto, aside from a growing volume of evidentiary trails, indubitably, palling around with the likes of Jalajel, Hamideh, and Hassan Sheikh – among others who embrace and promote Islamic Jihad – at the very least, it should be grounds for expulsion from Congress, let alone the subject of a FULL DOJ investigation!! 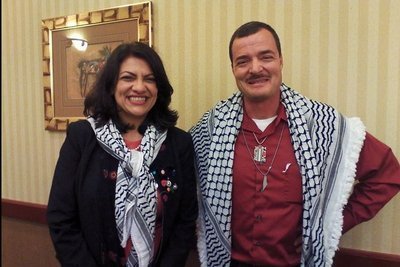 AND another thing. Do take note of Tlaib’s and Jalajel’s (see his terror bonafides linked above….visible below, too) matching scarves, they are signatures and identifiers of Hamas!! Birds of a (terrorist) feather.

YES, pictures, tweets, are worth (more than) a thousand words! In March 2019, Tlaib mugged with the aforementioned Nader Jalajel, a well-known terror supporter, a Hizballah ‘activist’, who opined:

“Allah Yerhamo,” or “May God have mercy on him,” Jalajel wrote above an image of the terrorist, Ahmed Jarrar, brandishing a gun. He died “after a long battle resisting the brutal Israeli occupation and defending his people and his land,” the image said. “We will never forget.”

BUT if that isn’t enough to evidence her close kinship with terrorists, well, one of the invited guests to her inaugural shindig was Abbas Hamideh – a proud and open supporter of, none other than, Nasrallah, the leader of Hizbullah; a global arch terrorist, and the cat’s paw of Iran’s terrorist masterminds!! Understood?

Abbas Hamideh@Resistance48
Happy Birthday to the most honorable Arab-Muslim leader of our lifetime! #Nasrallah#Hezbollah 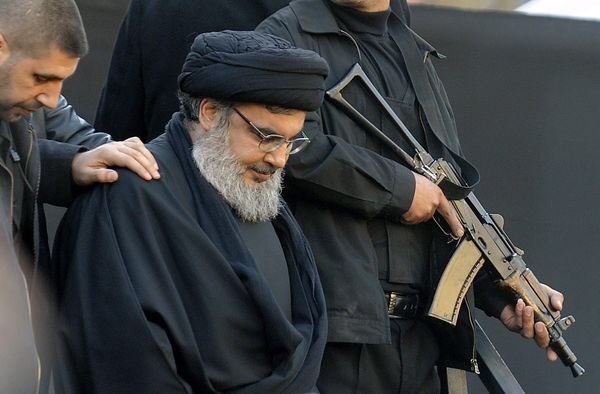 RESULTANT, is it any wonder that Tlaib has many aliases, in the same manner in which countless terrorists (and criminals) are known to do? By extrapolation, how is she any different than legions of material supporters of terrorism, be they in the U.S., another western country, or anywhere in the Islamic world? Besides, wouldn’t she fit right in with the female leadership in this and that Islamic-driven hellhole? If not, why not?
KNOW THIS: the very same Jihadi threats coming out of Britain (throughout Europe and beyond) are in sync with high-powered Islamists in America.

The UK-based man also pledges allegiance to the terror group’s leader Abu Bakr al-Baghdadi, who himself appeared in a video after several years in hiding.

A two-minute video posted on a pro-ISIS Telegram channel features the man with his face covered, speaking in an English accent.

The post is captioned: “I Swear Allegiance to the Caliph. O Kuffar DIE IN YOUR RAGE. FROM BRITAIN.”

It has been circulated by the Middle East Media Research Institute (MEMRI), a Washington DC based organisation that monitors jihadi output.

The video begins with the man introducing himself as “the Eagle” and says he pledges allegiance to “Abu Bakr Al-Baghdadi, may his name strike terror into your hearts”.

“I have grew up amongst you, filthy salibiyeen [crusaders]. I learnt your culture, your ways of life, and your disgusting debauchery. I reject all of this,” he says.

“We love death as much as you love life, so therefore my allegiance is to the Islamic State. I have nothing for this country of Britain.

“I spit on your citizenship, your passport, you can go to hell with that. So be ready for we too are waiting. “May Allah give victory to the mujahideen.”
‘DISGUSTING DEBAUCHERY’

“May he grant them victory and destroy your idols and make us establish the sharia over your necks whether you like it or not, and may we destroy all of what you hold dear.”…

THE only difference being is that Islamists in America engage in a more ‘circumspect’ way – that is, until they are able to be as bellicose as their fellow Islamists in Europe and beyond! Take it to the bank….. 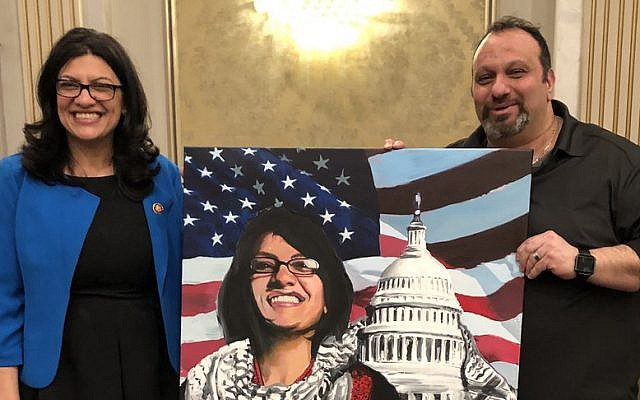