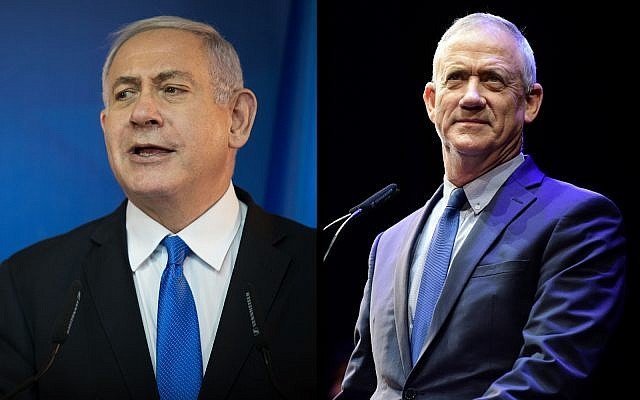 Prime Minister Benjamin Netanyahu’s Likud party and Benny Gantz’s Blue and White jousted Tuesday about whether or not coalition negotiations between them also included Netanyahu’s bloc of right-wing religious parties, a short while after teams concluded a 1.5-hour meeting in a long-shot effort to solve the political deadlock in the wake of last week’s national elections.

The meeting was arranged after Netanyahu and Gantz agreed to enter talks on a possible unity government following a meeting hosted by President Reuven Rivlin on Monday evening. Rivlin has invited the two leaders — both of whom are seeking the premiership — to return to the President’s Residence for dinner on Wednesday. Rivlin has until October 2 to charge one of them with the task of building a majority coalition.

An hour after talks ended, Blue and White and Likud released a joint statement shining a light on a main bone of contention: whom Levin is representing.

According to the statement, the sit-down was “matter-of-fact and held in good spirits.”

“The two agreed they would update the prime minister and the chairman of Blue and White regarding the meeting’s content, and then decide on next steps,” it read.

Netanyahu last week had the Yamina, Shas and United Torah Judaism (UTJ) parties sign an agreement with his Likud party to negotiate as a group, after elections that saw the right-wing and religious parties fail to garner enough support to form a coalition on their own. Gantz and his center-left partners also fell short of the needed 61 seats in the 120-member Knesset, leaving the secular-nationalist Yisrael Beytenu party in the kingmaker position with eight seats. 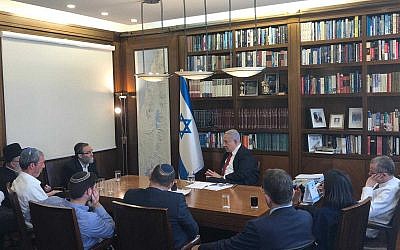 Prime Minister Benjamin Netanyahu meets with right-wing and Haredi faction leaders at his office in Jerusalem on September 18, 2019. (Courtesy Likud)

The prime minister on Monday met for the first time with Gantz, at Rivlin’s residence, and agreed to begin talks aimed toward building a unity coalition.

Netanyahu has assured his religious right-wing political partners that he will stick to his pact to negotiate as a bloc with them. At the same time, Gantz has told his party members that he will not abandon his promise to the voters not to let Netanyahu remain prime minister, in an indication that the political gridlock that has left Israel without a government for months could persist.

Sources in Blue and White quoted by Hebrew-language media insisted that they were holding unity talks with only Likud and not the entire right-wing ultra-Orthodox bloc.

“We are not in talks with the right-wing and Haredi parties. Netanyahu knows that we won’t be in government with Yaakov Litzman and Bezalel Smotrich. The talks are with Likud and not the bloc,” a party source was quoted telling the Ynet news website. 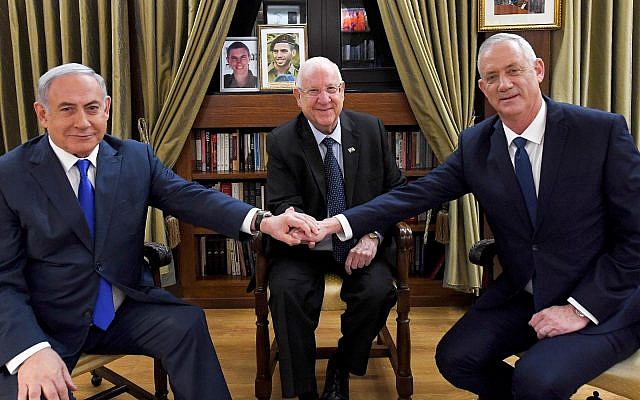 “The talks between the two largest parties are being held willingly,” a source from the party is quoted telling Walla news. “but it’s not possible to hold talks when you are talking about a bloc of 55 [seats].”

The meeting came with the sides continuing to bicker. Blue and White has claimed that Netanyahu plans to sell his right-wing religious allies short, drawing accusations that Gantz is trying to break up Netanyahu’s bloc.

Rivlin invited Gantz and Netanyahu for a private dinner on Wednesday, after meeting with the two men on Monday.

Gantz has insisted that he head any unity government and ruled out sitting with Netanyahu due to his pending indictment on graft charges. In the final weeks of the election campaign, Gantz also vowed to form a “secular” government and rejected partnering with Shas and UTJ.

After Monday’s meeting, Blue and White said Gantz had told Netanyahu unity was not possible unless he stepped down as prime minister. 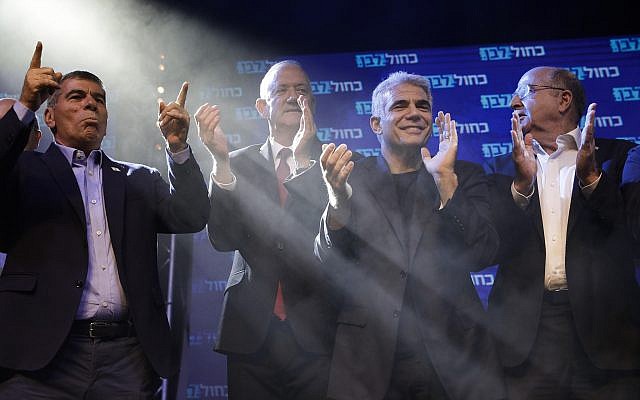 Netanyahu and Gantz met Monday for over two hours at the President’s Residence, first with Rivlin and then alone, with talks reportedly centering around who would head a possible joint government. Rivlin returned to speak with two again before the meeting ended.

Rivlin was expected to propose a rotation agreement that would see the two party chiefs share the premiership, though agreement over the order of such a deal remained elusive.

As Gantz and Netanyahu met alone, Rivlin’s office said he had told Netanyahu and Gantz that Israelis do not want another election and the onus was on them to overcome the gridlock.

“The responsibility for establishing a government falls on you, and the people expect you to find a solution and to prevent further elections, even if it comes at a personal and even ideological cost. This is not the time to rule people out,” he said.

Rivlin told Gantz and Netanyahu that as neither had secured a majority of recommendations to form the next government, he had greater leeway in whom he would task to do so. His decision on who the potential next prime minister will be must come by October 2.