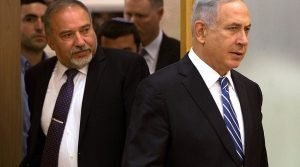 When Israel Beitenu  party chairman Avigdor Liberman abruptly resigned his position as Defense Minister last November and started the countdown to the Knesset elections in April, he plunged Israel into a state of political instability. Following the April elections, by refusing to serve in a government led by Prime Minister Benjamin Netanyahu and so forcing Israel into a second election, Liberman prolonged the instability he instigated.

Tuesday’s elections ended in deadlock. Neither major party can form a governing majority. And so, there is no end in sight for the instability Liberman provoked and prolonged.

Israel’s prolonged political volatility and uncertainty has had a disastrous impact on Israel’s strategic flexibility. Indeed, it has induced strategic paralysis. Israel cannot respond in a meaningful way to threats or take advantage of strategic opportunities that present themselves.

The implications of this dire state of affairs were brought to bear twice in one day during the campaign. In a press conference last Tuesday, Netanyahu announced his intention to apply Israeli sovereignty to the Jordan Valley after the elections. Netanyahu’s announcement included the revelation that President Donald Trump supports the move. U.S. officials backed his claim after the fact.

This was a stunning development. No U.S. administration has ever supported Israel’s right to assert its sovereign rights in Judea and Samaria without Palestinian permission until now.

But the media and Netanyahu’s political opponents on the left and right ignored this basic fact and instead derided his statement as nothing more than a cheap election stunt to rally his base.

In a way, they were right. After all, all Netanyahu did was make a promise. But it was due to Israel’s strategic paralysis that he had no other option.

Liberman’s resignation precipitated the Knesset’s dissolution in January with called for April. Trump had planned to release his peace plan late last year. The elections compelled him to delay its release. Liberman’s refusal to join Netanyahu’s coalition in May forced Trump to again delay release of his plan.

So long as Trump hasn’t released his plan, Netanyahu has been constrained to announce any position on the permanent disposition of Judea and Samaria. Under the circumstances, declaring his intention to apply Israeli sovereignty over the Jordan Valley with American support was the best he could do. Anything more would have harmed Trump’s rollout. And Trump won’t present his plan so long as there is no government.

Tuesday evening, Netanyahu was delivering a speech in Ashdod when the Islamic Jihad in Gaza shot a missile towards the city. Netanyahu’s bodyguards quickly compelled him to leave the stage and seek shelter.

Islamic Jihad is an Iranian proxy. It does nothing without Iranian permission and often direction. So to all practical purposes, the missile strike on Ashdod was an Iranian strike. It was launced to advance Iran’s strategic goal of fomenting Netanyahu’s removal from office.

Blue and White party leaders Benny Gantz and Gabi Ashkenazy were happy to swallow Iran’s bait. They insinuated that Netanyahu was a coward for leaving the stage in the midst of the attack.

The public, which has grown tired of running for shelter from rockets and missiles, similarly voted, or chose not to vote, just as Iran had hoped.

Presumably recognizing the strategic significance of the attack, according to media reports, Netanyahu wished to respond with a strategic strike against Hamas and the Islamic Jihad in Gaza. But so long as Israel is in a state of strategic paralysis, there’s no point in going to war. There is no way to set, let along achieve military goals that can advance Israel’s strategic interests for the long haul.

As bad as things are in Gaza, the regional situation is many times worse, as last Saturday’s Iranian attack on Saudi Arabia’s oil processing plant at Abqaiq and its oil field at Khurais demonstrated.

The evidence U.S. and Saudi investigators have found at the sites prove Iran was behind the attacks which it carried out with drones and cruise missiles. U.S. officials announced Thursday that they originated in a Revolutionary Guards base in Ahvaz in southern Iran.

But while U.S. Secretary of State Mike Pompeo and other senior U.S. officials have openly admitted that this was an Iranian strike, Trump himself has waited to make a definitive statement about the attack and its implications for the U.S.

Trump’s reticence is a product of political constraints.

Ahead of next year’s presidential race, Trump needs to secure his political base. A large portion of his voters are sick and tired of the Middle East and its wars. A direct U.S. military confrontation with Iran in retaliation for last Saturday’s attack would anger those voters. Trump’s reelection bid would be threatened.

Before entering a military confrontation with Iran, Trump needs to deliver three things to his voters. First, he needs to be able to provide absolute proof that Iran is responsible for the attack on the Abqaiq and Khurais oil installations and that the attacks did in fact originate from Iranian territory. U.S. investigators are assembling that proof.

Second, Trump needs to be able to make the case that the attack on the Saudi installations directly harmed vital U.S. interests. This case is not difficult to make. The Iranian temporarily took out 5 percent of global oil output. Since the end of World War II, protecting the free flow of oil from the Persian Gulf to global markets has been a foundation of U.S. Middle East policy.

The third thing Trump must do to preserve his political base is ensure that the lion’s share of the burden – military and economic — of retaliation is borne by U.S. allies, not by the U.S. Trump’s supporters firmly believe that since it was Saudi territory that was targeted, the Saudis need to bear the brunt of the burden. Trump stated outright that the Saudis will be footing the bill during a press opportunity on Tuesday.

While Trump is constrained by his base, his Democratic and European opponents are blaming the Iranian strike on Trump. Everyone from French President Emmanuel Macron to German Chancellor Angela Merkel to former Obama White House officials insist if Trump hadn’t abandoned his predecessor Barack Obama’s nuclear deal that gave Iran $150 billion and an open road to a nuclear arsenal by 2025, the Iranians would never have gone to war against Saudi Arabia. If Tump goes back to the deal, and gives Iran a $15 billion credit line, they promise, Iran will put down its guns.

Although Trump refuses to close the door on the possibility of sitting down and making a deal with Iranian President Hassan Rouhani, it is clear that he has no intention of abandoning his “maximum pressure” strategy and embracing Obama’s “maximum appeasement” strategy towards Iran.

It is also clear that in Trump’s view, his options are limited. He expects U.S. allies to carry most of the load.

Which brings us back to Israel’s strategic paralysis.

It was in response to Obama’s bid to realign the U.S. away from its traditional allies Israel and the Sunni Arab states and towards Iran and the Muslim Brotherhood that that Netanyahu first reached out to the Sunni Arab regimes. His efforts quickly bore fruit. Led by Egypt and Saudi Arabia, the Sunnis began working intensively with Israel to minimize the strategic damage of Obama’s policies.

Netanyahu’s outreach was successful and as a consequence Israel, long isolated from its region, emerged as a regional power accepted and respected by its Sunni partners. It was Israel’s newfound strategic posture that propelled the Trump administration to embrace Israel as a full partner in its maximum pressure campaign against Iran. For the past year, Israel and the U.S. have had a division of labor. The Trump administration has waged economic war against Iran with sanctions and Israel has served as the military component of the campaign by striking Iranian assets and installations in Iraq and Syria.

Now, when it is clear that the U.S. is both constrained from conducting a major operation due to Trump’s electoral concerns, and fully cognizant of the need to retaliate militarily against Iran in a serious way, the price of Israel’s strategic paralysis has become prohibitive.

The Iranian strike on Saudi Arabia’s oil installations is an opportunity to carry out a strategic assault on Iran. Such an assault could target Iran’s nuclear installations, Revolutionary Guards bases and other regime targets. The goal of such a campaign would be to significantly set back Iran’s nuclear weapons program and undermine regime stability.

Today is an opportune moment for Israel to conduct such an attack, in cooperation with Saudi Arabia. U.S. support a retaliatory strike would increase the probability of success significantly.

Were Israel to conduct such an operation, it would safeguard its regional position and deterrent power for a generation. It would do so at Iran’s expense and so vastly diminish the strategic threats it faces.

On the other hand, if due to its strategic paralysis, Israel fails to take advantage of this opportunity, the strategic balance of power in the Middle East will shift in Iran’s favor.

Iran will be empowered by the U.S.’s weak response, Saudi fecklessness and Israeli inaction.

Inside the U.S., Trump will take a political hit. Following Obama’s pro-Iranian administration, Trump has made restoring the U.S. alliance with Israel and the Sunnis the centerpiece of his Middle East policy. Israeli inaction combined with Saudi incompetence will be used by Trump’s political opponents and the isolationist wing of his support base to condemn his key policy as a failure. Obama’s nuclear deal, and his maximum appeasement strategy will get a new lease on life.

The major failing of the Israeli media, and most Israeli politicians is their chronic inability to understand how outsiders – in the region and throughout the world – perceive Israel. They don’t consider, let along understand the ramifications of those perceptions on Israel’s national security. Consequently, they don’t understand that Israel’s prolonged political instability imperils our most critical strategic interests and squanders our greatest strategic opportunities.