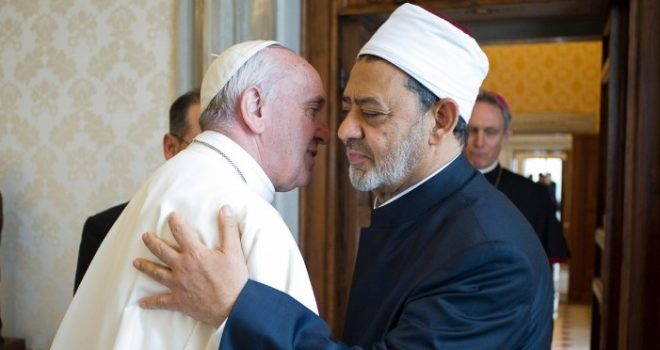 “Is the pope Catholic?” used to be a punch line. Now, sometimes, you almost have to wonder. Of course, I’m not suggesting that Pope Francis is a secret apostate or a Masonic agent. It’s just that he seems dissatisfied with certain Church teachings.

What apparently rankles him most are Catholic claims to exclusivity. For example, the belief that all men are saved through Christ can be looked upon as an impediment to interreligious harmony. Francis, for whom interreligious harmony is a top priority, seems to see it that way. Many of his statements seem to suggest he has abandoned the idea that Catholics should seek to convert others to the Faith. On one occasion, for example, he referred to proselytism as “solemn nonsense.”

Francis appears to believe that each religion provides its own path to heaven. If that’s so, then people are best served by going deeper into whatever faith they already belong to. Thus, Francis once advised a group of Muslim migrants to read the Koran in order to find direction in their lives.

As he wrote in Evangelii Gaudium, Francis believes that all religions have “shared beliefs.” Where those beliefs don’t overlap so neatly, he seems perfectly happy to blur the lines. A good example is the Abu Dhabi Declaration on “Human Fraternity” signed by Pope Francis and Amhad Al-Tayeb, the Grand Imam of Al-Azhar, in February.

Of particular concern is the statement that “the pluralism and the diversity of religions… are willed by God.” That’s quite a concession for Francis to make, as it contradicts Christ’s claim that “I am the way and the truth and the life; no one comes to the Father but by me.” (Jn. 14:6). As Swiss bishop Marian Eleganti puts it, “the unique and universal mediation of Jesus Christ is eclipsed in the Abu Dhabi Declaration.”

Just so. But there are many other problems with the document besides God’s supposed endorsement of a variety of contradictory religions. In their commitment to inclusion, the drafters of the document—mostly Catholics, one assumes—end up saying things that are true neither of Catholicism nor Islam.

Contrary to the evidence, the Declaration assumes that the one common religion already exists in nascent form, and that the teachings and values of all religions are essentially the same. Thus, “the values of tolerance and fraternity… are promoted and encouraged by religions.” And, therefore: “These tragic realities [hate, extremism, and violence] are the consequence of a deviation from religious teachings.” Terrorism for example, “is not due to religion… it is due rather to an accumulation of incorrect interpretations of religious texts.”

If that’s so, how is it that so many Muslims in so many different parts of the world interpret Koranic texts in exactly the same way—namely, as a justification for jihad? How would you interpret: “Then, when the sacred months are over, kill the idolaters wherever you find them” (Koran 9:5)?  There are over a hundred similar texts in the Koran. By contrast, there are very few texts of the love-thy-neighbor-as-thyself variety.

In fact, Catholic apologists for Islam are reduced to citing the same three Koranic verses over and over because there just aren’t that many to pick from. As it happens, the Document on Human Fraternity begins with a paraphrase of the most frequently cited verse: “Whoever saved a human life shall be regarded as having saved all mankind” (5:32). Unsurprisingly, there’s no mention of the very next verse:

Those that make war against God and His Apostle and spread disorder in the land shall be slain or crucified or have their hands and feet cut off on alternate sides (5:33).

Pope Francis and other Catholic apologists for Islam claim that terrorist leaders simply misunderstand Islam. If that’s the case, then the very first person to misunderstand Islam was Muhammad himself, who commanded that the hand of a thief be cut off. The Life of Muhammad—which, after the Koran and the Hadith, is considered the most important source of Islamic truths—is essentially a record of Muhammad’s jihadist exploits. Approximately two-thirds of its 800 pages detail Muhammad’s jihad raids, his beheading of captured prisoners, his slave trading, his endorsement of rape and sex slavery, and his use of torture.

Did Muhammad misunderstand Islam? For that matter, does Grand Imam Al-Tayeb misunderstand Islam? Yes, he did sign the Document on Human Fraternity—but Muhammad signed the Treaty of Hudaibiya with the Meccans, too. That was a great PR stunt, but it wasn’t worth the paper it was written on.

Al-Tayeb doesn’t misunderstand Islam, though Francis appears to. He must be acquainted with the darker aspects of Islam, and yet he seems sure that they have nothing to do with “true” Islam.

Such an approach helps to burnish Islam’s image. But what does it do for Catholics? Primarily, it misinforms them. Readers of the document on human fraternity will be left with a false impression of the Muslim faith. They will come away with the conviction that Islam is a member in good standing of the fraternity of great humanitarian religions. In short, they will conclude that there’s nothing to worry about.

This impression won’t be left to chance. A multi-faith committee has been set up to ensure that the principles of the document will be spread throughout the world. What this means in practice is that Arab leaders will set up a few Potemkin Village-like centers to ostensibly study human fraternity, while the Catholic Church will rush appropriately adapted versions of the one-world religious humanism into every Catholic seminary, university, high school, and kindergarten on the planet.

Catholics are already badly misinformed about Islam. The Abu Dhabi statement, once it is widely disseminated, will only serve to reinforce their naïveté. That, in turn, will leave them unprepared for the next step in what has become a predictable progression.

The next step is Islamization. That’s not a word one hears very often, especially in polite Catholic circles. But some Catholics can’t afford to be polite. Fr. Valentine Obinna told Crux that, in Nigeria, Fulani Muslims killed almost 9,000 Christians and other non-Muslims in a recent three-year period, as part of a program for the “Islamization of Nigeria.” President Buhari and those in power turn a blind eye to the activities of the Fulani and Boko Haram, he said, because they “want to make sure the whole country becomes a Muslim country.”

Apparently, President Buhari—a member of the Fulani ethnic group—didn’t get the message from Abu Dhabi. Otherwise, he would understand that Islam is a religion of peace, love, and human fraternity. On the other hand, perhaps the elderly president has a firmer grip on Islamic principles than does Pope Francis and his advisors. If so, he would understand that the Islamization of Nigeria is not a deviation from the teachings of Islam; it is very nearly the first principle. As Muhammad said, “I have been commanded to fight against people till they testify that there is no God but Allah” (Sahih Muslim 1: 33). Indeed, the whole purpose of Islam on earth is to bring the House of War (i.e. non-Muslim territory) under the rule of the House of Islam.

Islamic teaching mandates not only that Nigeria be Islamized but also Europe, Canada, the U.S., and the entire globe. Only at that point, from an Islamic point of view, can peace and human fraternity be achieved. Buhari understands that. Al-Tayeb understands it. Catholics can’t allow themselves to be misinformed on this point.

The astonishing ignorance of these basic teachings on the part of Pope Francis and his advisors doesn’t make for a more harmonious world: it makes for a more dangerous one. Those who buy into their fantasy view of Islam are in for a rude surprise when they encounter the real thing.